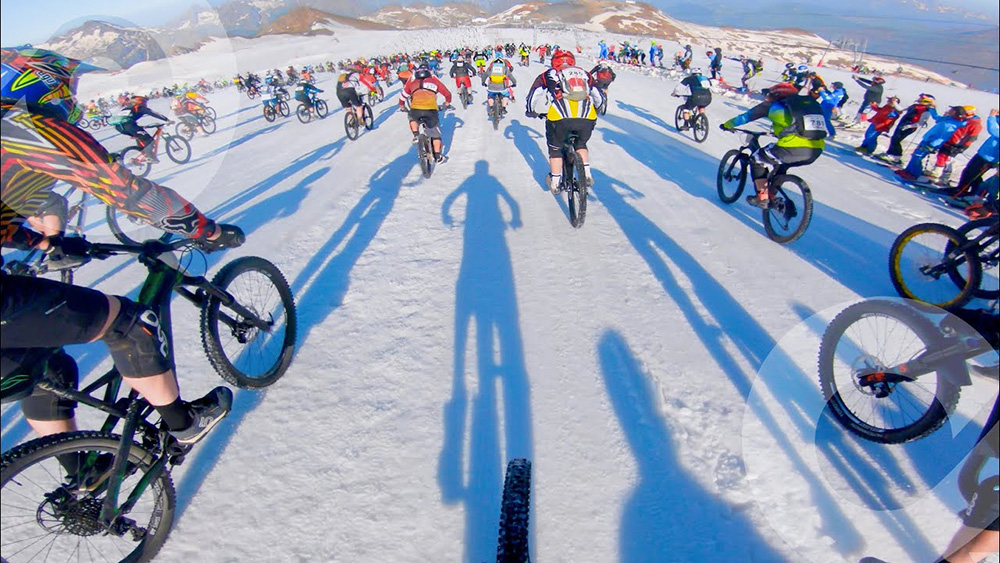 The Mountain of Hell Bike Race is the Deadliest Bike race in the world which takes place in France where the Lex Deux Alpes ski resort hosts the event every year for 3 days on July-24, 25, and 26. Over one thousand adrenaline junkies and frankly absurd people participate in this race. And one of them was YouTuber Tyler Oliveria.

In his video, you will see Tyler descending 8530 feet down the mountain of hell. And he will do this on a single dangerously close to the edge bike track that is 15 miles long. For that, he had to rage through the snow, ice, and rocks. And of course the local people. One of whom you will see in the video lovingly refers to him as “You American scum”!

Sixty percent of the race is covering dangerous trails on the bike. And those parts have scary names. Such as slippy cliff, tight rope, and Backbreaker. Moreover, Oliveria took on all this without any prior training. As a matter of fact, he hadn’t ridden a bike in five years. Therefore, his concerns were very real.

You will see throughout the video how the people he passes on the trail are really worried about his attempt. And Oliveria himself was dreading a brain injury too.

Well, it was natural. Considering how narrow and slippery the track was. Plus, he had to save himself from crazy speeding bikers ridiculously high on death and adrenaline.

However, this is the man whose tagline is “because you never know when Tyler’s gonna go” And he even tells you that peers forbade him to do this as a beginner. But that’s what pushed him to do it more. It’s quite humbling to see how far YouTubers can go to create content for us.

The trail is dangerous enough to ride a bike on. But this was a race. And from the very beginning, the crazy racers started whooshing past Tyler.

Wrapping Up The 2021 Race: One Champion And Zero Losers

The champion of 2021 was Kilian Bron. You will see Tyler talking to him in the video where he comes off as a very positive guy. Because when Tyler asks him if he is going to die as he hasn’t ridden a bike in five years, Kilian answers no. And that kind of motivation from the champion himself sure helped Tyler to complete the race.

Kilian was also the champion in the previous year. Which was the 2019 Mountain of Hell bike race. Because the 2020 event was canceled due to a pandemic. In this last race, Killian Bron won again. And he completed the race in twenty-eight minutes! No, you didn’t read that wrong.

In the women’s category, Emilie SERRE came first. She conquered the impossible mountain trail in 40 minutes. Liesbeth Hessens and Kristen Nelen caught up to her soon.

As for Tyler himself, he finished in the 1000th position behind Kilian. Well, the position isn’t what matters here. Because the fact that he raged through and still completed this dangerous and tedious journey is what you will find most motivating. And it truly goes to show how inspiring and driven these various YouTube creators can be solely for our entertainment.