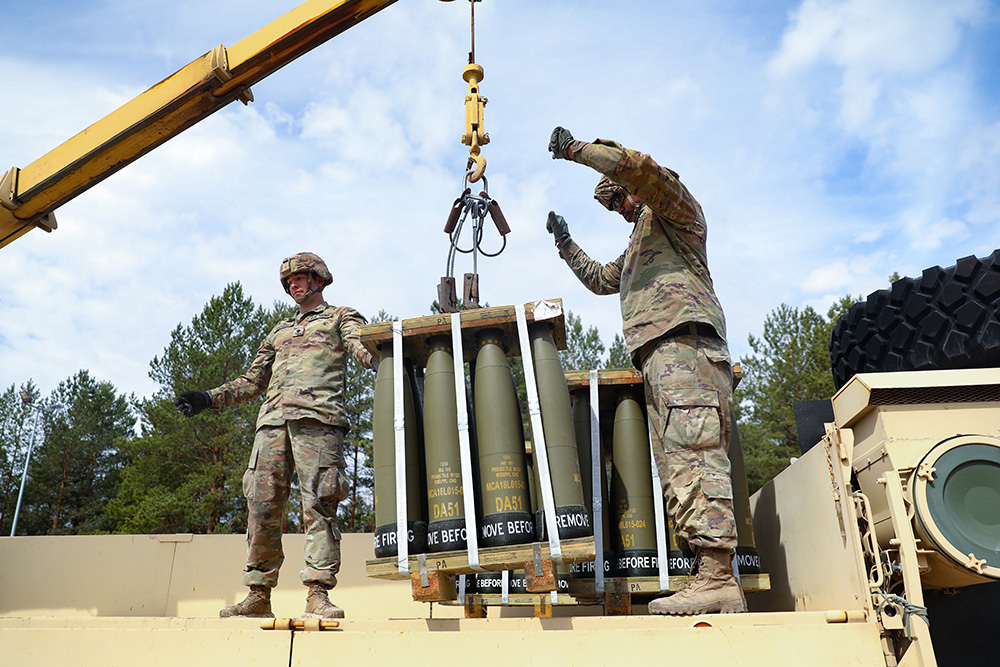 More than 20,000 service members from over 20 countries supporting NATO, including the National Guard, showcased their integrated military capabilities during large-scale exercises throughout Europe in April and May.

The exercises are designed to ensure the United States, NATO, and partner nations “are prepared to defend every inch of NATO territory with a strong, combat-credible force to ensure we stay stronger together in the face of any aggression,” said Gen. Christopher Cavoli, U.S. Army Europe and Africa commanding general.

So far this year, more than 4,000 Guard members supported these and other exercises in Europe.

“The National Guard has been a major contributor to U.S. European Command exercises this year,” said U.S. Air Force Maj. Gen. Jessica Meyeraan, director of USEUCOM exercises and assessments. “When these forces train alongside allies and partners, it’s mutually beneficial. Not only does it improve interoperability and capability within the alliance, the National Guard units receive immeasurable benefit from these training engagements.”

“I think Locked Shields showcased the unique capabilities the National Guard is able to bring to the cyber battlefront,” said U.S. Army Staff Sgt. Ian Frist, an exercise participant with the West Virginia Guard’s 197th Regiment (Regional Training Institute). “Living in both worlds gives me an incredibly unique perspective on cybersecurity operations that I felt was indispensable during the exercise.”

In addition to participating in exercises remotely from the United States, Guard members traveled to Europe to participate in exercises like Swift Response 22, which focused on airborne and air assault operations. The annual U.S. Army Europe and Africa Command multinational training exercise included forces from 17 countries from May 2-20 in Norway, Latvia, Lithuania and North Macedonia.

In North Macedonia, Vermont National Guard members built on their partnership with their NATO counterparts.

The two militaries are uniquely familiar with each other, having trained together since 1993 as part of the Department of Defense National Guard Bureau State Partnership Program. The program pairs each state’s National Guard with the armed forces of partner countries in a cooperative, mutually beneficial relationship. The SPP has 87 partnerships with 95 countries – 45% of the world’s nations. Twenty-two of those partnerships are in Europe, 13 with NATO members.

Before participating in Swift Response, the Vermont National Guard had already conducted more than 350 military-to-military engagements with North Macedonia. Most of the 120 Vermont Army National Guard members who traveled to North Macedonia were members of Company A, 3rd Battalion, 172nd Infantry (Mountain), 86th Infantry Brigade Combat Team (Mountain). Many of these Soldiers were recently deployed in desert terrain to support U.S. Central Command.

“For most of our Soldiers it will be the first time they have trained in Europe,” said U.S. Army Capt. Aaron Harkness, assistant plans officer with the battalion. “The environment, terrain, and training mission are different from what we have been focusing on over the last two years. It will be great for us to get back to training in a mountainous environment where we can utilize the terrain to our advantage.”

In addition to training on the ground, another 120 National Guard members from Maryland Air National Guard’s 175th Wing supported the exercise from the sky with 10 A-10 Thunderbolt II aircraft.

“While operating in North Macedonia posed unique challenges, they were quickly overcome by world-class host nation support, and the solely unique capabilities of the A-10 were brought to the fight with 100% success,” said U.S. Air Force Maj. Chris Hoffman, a pilot with the wing and the project officer for the North Macedonian portion of the exercise. “The team-building across multiple military branches and NATO partners was unparalleled.”

Simultaneously to the 9,000 multinational personnel conducting Swift Response, more than 8,000 more were taking part in DEFENDER-Europe 22, which continues through the end of June. More than 1,300 Guard members made up roughly one-third of the U.S.-based personnel who traveled to Europe to participate in the exercise.

“When we started the exercise, I asked you all to become a strong team because that’s what this alliance is all about,” said Slovakian Lt. Gen. Pavel Macko, the deputy chief of the general staff of the armed forces of the Slovak Republic. “I’ve seen a strong team, many different uniforms, heard different accents, but I can tell you we speak the same language of values, we speak the same language of tactics.”

These annual large-scale exercises are not new or unfamiliar to the National Guard, U.S. military, or their NATO allies. Exercises in Europe are planned and conducted year-round to maintain the readiness of strategic partnerships while sustaining normal operations in the rest of Europe.

The Guard will continue to be a significant presence in the ranks of the 64,000 U.S. military personnel supporting U.S. European Command exercises.

“The propensity to utilize National Guard units during U.S. European Command exercises and operations is a testament to the unique capability and expertise these service members bring to the theater,” said Meyeraan. “As we continue to train alongside our allies and partners, the National Guard will continue to have a significant role in those activities.”