No other military in the world could do what the U.S. military accomplished in evacuating 124,000 people — Americans, Afghans and third country personnel — from Kabul, a senior defense official told reporters traveling with Secretary of Defense Lloyd J. Austin III.

The official was not bragging, just making a factual assessment. No other country has a military with the capabilities, capacities and especially the network of allies to accomplish this mission in the time allotted.

Austin and Secretary of State Anthony Blinken are visiting the Arabian Gulf nations that supported the evacuation mission, working hand-in-hand with American interagency teams. Austin called it the largest non-combatant evacuation in history.

This international network was key to the effort. Qatar alone received 58,000 refugees as the first stop after leaving Kabul. The Qataris helped process them and helped move them on to Europe. Many of the evacuees are now in the United States.

Austin and Blinken met with representatives of the effort at Al Udeid Air Base in Qatar today to thank them for their efforts, which are still continuing. There are 4,000 refugees still in Qatar awaiting the next leg of their journey.

The team the two men talked to didn’t have a template to follow: they had to work together making the rules up as they went along, and they had to do it under severe time constraints. “I’m grateful for what you’ve done, your country is proud of you, the President of the United States is proud of you,” Austin told the men and women. “This is what interagency is all about: Teamwork. Working through challenges. Doing it with compassion, professionalism and competence. And in my view, it could not have been done better, and I just wanted to tell you that I am enormously grateful.” 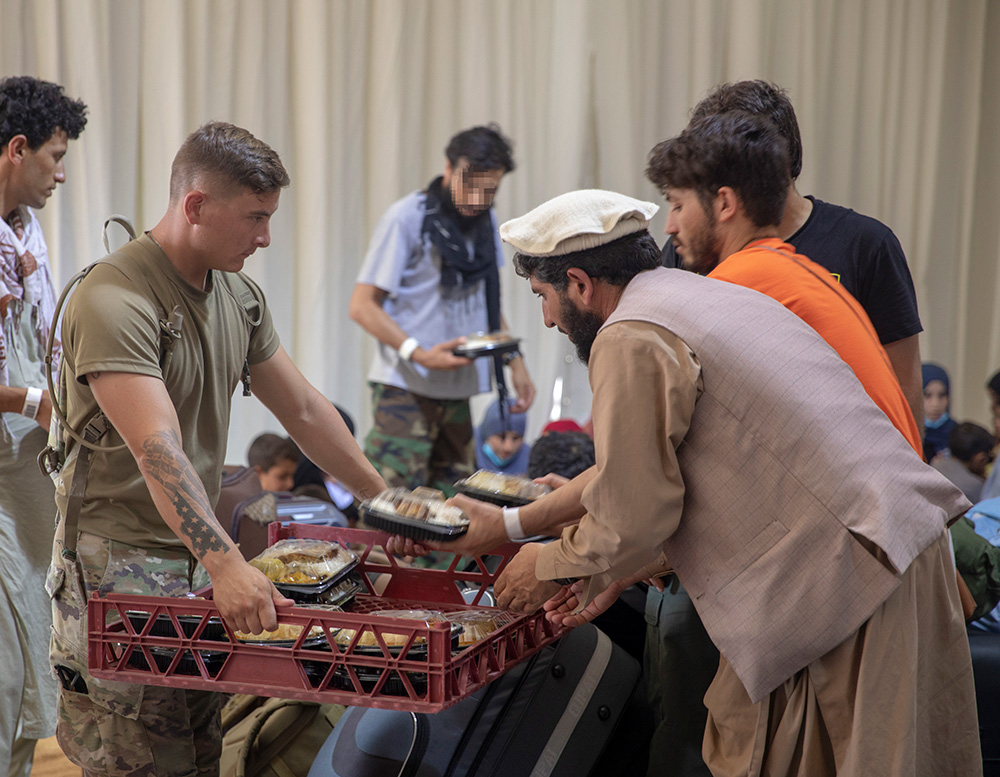 A U.S. soldier with the 503rd Military Police Battalion helps distribute meals to Afghan evacuees at Al Udeid Air Base, Qatar, Sept. 1, 2021. The 503rd MP BN, based out of Fort Bragg, N.C., along with other agencies and coalition partners volunteered and worked in various roles to support Afghanistan evacuation efforts. © Army Staff Sgt. True Thao

The 6,000 troops that secured Hamid Karzai International Airport after Kabul fell to the Taliban, didn’t just arrive by magic. They were brought there — combat ready — by American gray tails — C-17s that lived up to the name “Globemaster III.” The soldiers and Marines arrived quickly and with all the equipment needed to perform the mission. Air Force personnel arrived and took over the air traffic control mission. There was air support overhead from Navy carriers and Air Force assets from the Arabian Gulf. Those aircraft had to be tanked and maintained and guided and loaded.

The gray tails also airlifted the refugees out of Kabul. The photo of the C-17 with more than 800 refugees jammed into it went viral.

In Kabul, Defense and State Department personnel had to quickly learn processes while keeping all safe. That it was a dangerous mission became apparent when an Islamic State suicide bomber killed 13 U.S. service members and at least 200 Afghans in a vile attack.

But even as troops landed in Kabul, others were preparing sites in the Arabian Gulf, Europe and the United States to receive these thousands of men, women and children fleeing the Taliban. The American troops defended the airfield allowing forces from other nations to evacuate their citizens, too. 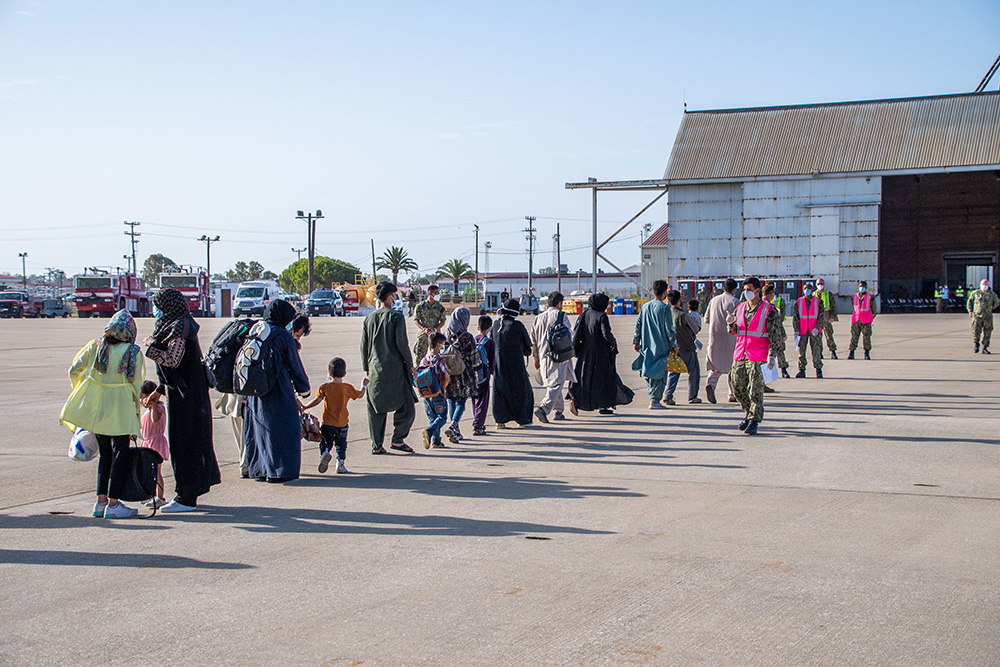 From planning through execution, the effort was immense. In addition to the 6,000 troops on the ground there was a Navy carrier strike group, there were air expeditionary wings. There were maintenance people at bases in Kabul, the Arabian Gulf and Europe all working to ensure the Afghan lifeline would be maintained.

There were cooks and logisticians who ensured the food met the dietary and religious needs of the refugees.

There were medics from host nations providing care for the refugees that needed it. There were thousands of volunteers in Europe seeking to donate clothes, diapers, baby goods and more.

Austin frankly noted that no operation goes perfectly. “There are lessons to be learned,” the secretary said. “And what we’ll do is what we always do in the military, which is to conduct an after-action review, take a look at ourselves, take a look at what we did, and what we could [have done] better.”

All that is in the future. What is in the present is that 124,000 people have a chance for peace and security thanks to the efforts of thousands of American service members and civilians who worked and planned and sacrificed to make it possible.