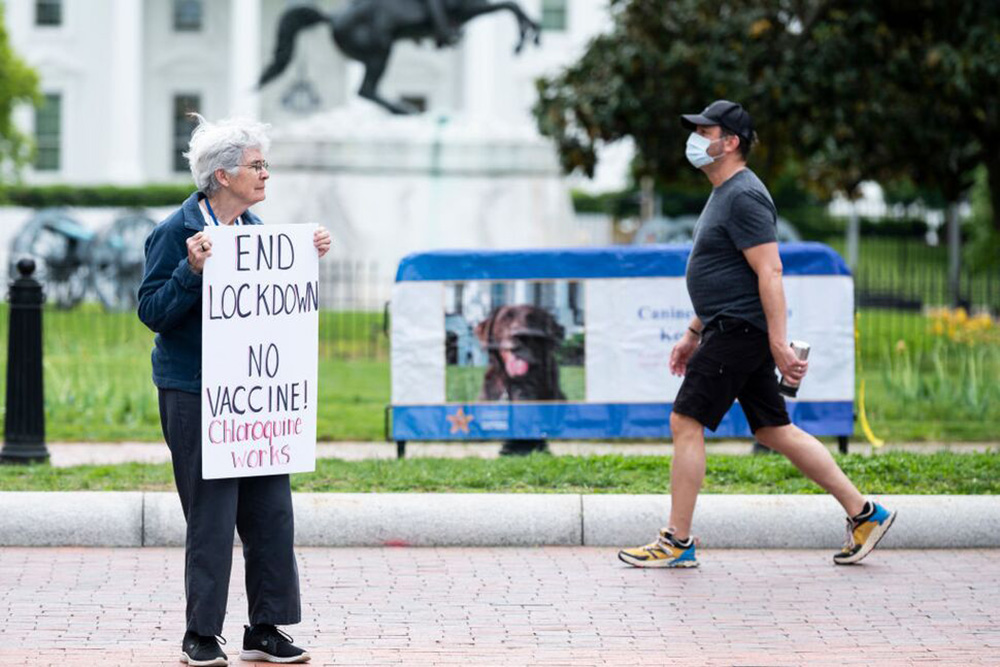 A protester holds a sign in front of the White House in Washington on April 25, 2021. © Bill Clark / CQ-Roll Call

Trusting health advice from governments and health workers, and feeling positively about vaccines, are strongly associated with trust in institutions, according to a peer-reviewed study from UCLA researchers published in the August edition of the journal Health Affairs.

In the midst of a global pandemic that has claimed more than 4.2 million lives, according to the World Health Organization, and where basic preventive measures depend heavily on trust in government leaders and healthcare professionals, the findings are a sober reminder of the need for effective public health communications to control the crisis, Moucheraud said.

The findings are based on analysis of responses to the 2018 Wellcome Global Monitor survey, which is the most recent and comprehensive (across all geographic regions and income levels) global assessment of people’s opinions of health and medical topics, including trust and attitudes toward vaccines.

“People’s trust in these institutions (governments and healthcare professionals) was correlated with trust in health or medical advice from them, and with more positive attitudes toward vaccines,” said Huiying Guo, a Fielding School doctoral student and co-author of the study. “Vaccine attitudes also varied substantially worldwide, with safety being the most common concern.”

There were significant differences by geographic region: positive attitudes toward vaccines—feeling that they are safe, effective, and important—varied widely, with more than 70% of South Asian respondents, but fewer than 40% of European or East Asian respondents, strongly agreeing with these sentiments. In some regions (East Asia, Europe, and North America), respondents were particularly unlikely to strongly agree that vaccines were safe.

Although the survey pre-dates the SARS-CoV-2 outbreak by roughly one year, the researchers found elements that may be relevant to the current pandemic. Trust in government was positively associated with rural residence and negatively associated with educational attainment, and was highest among those who were older. The researchers also identified gender differences – women expressed greater trust in medical advice from the government and from medical workers, compared with men. These suggest potential areas for prioritizing or focusing interventions and public health messaging.

The analysis found three key findings that are especially relevant to policy-making:

The relative priority of vaccine safety found in the survey, for example, suggests that information on this topic could be emphasized, instead of focusing on vaccine importance or effectiveness.

“Policymakers should understand that the public may have varying levels of trust in different institutions and actors,” said co-author Dr. James Macinko, also with the Fielding School. “Although much attention is paid to crafting public health messages, it may be equally important, especially during a pandemic, to identify appropriate, trusted messengers to deliver those messages more effectively to different target populations.”

Funding: Moucheraud is supported by the National Center for Advancing Translational Science (Grant No. KL2TR001882), part of the U.S. National Institutes of Health.

Methods: The team used nationally representative survey data from 144 countries to assess people’s degree of trust in institutions (governments, and doctors, and nurses) and health advice from them, and how each type of trust is associated with attitudes toward vaccines. Sources include the Wellcome Global Monitor survey, which collects information on trust and respondents’ individual-level characteristics. In total, 149,014 respondents from 144 countries completed the Wellcome 2018 survey.