In The Wasteland, Author Harper Jameson brings readers into the extraordinary mind of T.S. Eliot as he rises from an obscure bank clerk to the world’s most famous poet. The book explores his profound struggle to accept his sexuality. It weaves a narrative inspired by Eliot’s poems, his letters, and his iconic characters. It is as much a meditation on art, intolerance, and demagoguery as it is a story about the poet’s life. 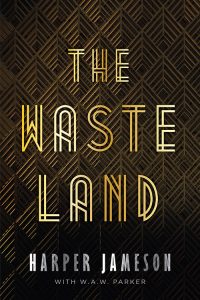 T.S. Eliot’s sexuality has never been settled, historically. In fact, Eliot publicly denied being gay, then burned nearly all letters that might have contradicted this. But on January 2, 2020, over 1100 letters written by Eliot were published by Princeton University. Emily Hale, the recipient of these letters, donated them with the instruction to publish them 50 years after she and Eliot died. They give insight into Eliot’s true character, a side of him shut off from the public.

In The Wasteland, Eliot begins as a hollow man trapped in a London bank’s dreary world in the 1920s. One day Eliot intervenes to save a man being badly beaten. He discovers Jack, an out and proud gay man. Jack introduces Eliot to the gay underground and unleashes a torrent of creativity that begins to transform his life.

Meanwhile, lovable but naïve Vivienne is also falling in love with Eliot. Eliot finds that as his fame increases, pressure for conformity increases as well. Religious intolerance, increasing Fascist inspired anti-gay violence, and an ever brighter public spotlight push him to sacrifice.

The Wasteland is the untold story of T.S. Eliot.

“Fresh, snappy, and tight. Briskly paced, page-turning action with a commanding use of the English language makes this a thoughtful and entertaining read.” — Screencraft

Harper Jameson graduated from Brown University with a history degree and launched the Social Impact Conference to support individuals dedicated to positive social change. He realized storytelling was fundamental to changing the world and that history housed the greatest stories of them all. He brings back to life important but forgotten, or misunderstood, historical figures so readers can learn about them firsthand.