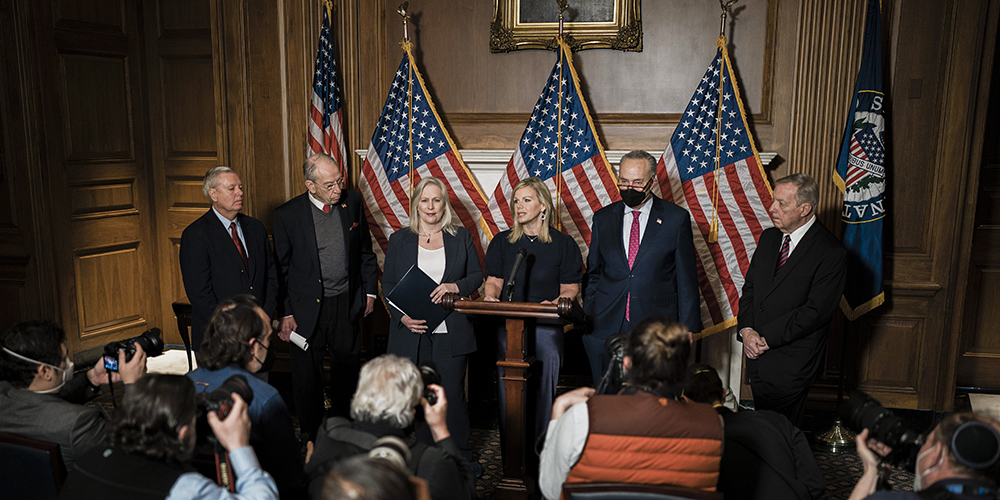 The Conference Board brought together three individuals who played leading roles in the development and passage of groundbreaking federal #MeToo legislation: Senator Kirsten Gillibrand (D-NY), Congressman Ken Buck (R-CO), and Gretchen Carlson, Cofounder of the nonprofit Lift Our Voices, whose lawsuit helped ignite the movement.

Paul Washington, Executive Director of The Conference Board ESG Center, moderated the panel, which focused on the historic path to the bipartisan legislation’s passage, its implications for business, and prospects for future bipartisan collaboration on issues of economic opportunity and workplace fairness.

Passed with strong support in February, The Ending Forced Arbitration of Sexual Assault and Sexual Harassment Act marks one of the most significant workplace reforms in recent decades. It prohibits companies from forcing those who claim sexual harassment and assault into arbitration, and now provides them with the choice to bring their claim in an open court of law. As the panel noted, this change not only helps to bring individual claims to light, but also can identify broader patterns of sexual abuse and harassment.

The public can view the full panel discussion here. Insights from the conversation include:

How a grassroots movement led to bipartisan action:

The panelists described the slow but steady process of finding common ground among Democratic and Republican lawmakers. They noted key elements that made this new law possible, including:

Steps companies can start taking in response to the #MeToo law:

As Gretchen Carlson noted about arbitration, “Most people have no idea what it means. And that includes not only the millions of employees across the country, but also people who run companies. When I talk to companies every single day, many times C-suite executives have to say to me, ‘I need to check my contract.'”

How companies can advance their legislative goals in a polarized environment:

In addition to being willing to compromise and focusing on the facts, the panel suggested steps companies should take to achieve legislative goals.

“Almost half of U.S. corporations say that the environment for corporate political activity in 2022 will be even more challenging than last year. Despite the tough landscape, CEOs shouldn’t retreat from the public square. Business leaders can be a moderating influence on partisanship, as they are more concerned about achieving practical policy outcomes,” said Paul Washington, Executive Director of The Conference Board ESG Center.

Bipartisan prospects for achieving greater opportunity and fairness for workers:

The conversation was the first of two webcasts The Conference Board will be hosting on the topic. The next discussion, hosted by the organization’s Human Capital Center, will focus on how companies are responding to this law and pressure from stakeholders on workplace harassment concerns.