This October, Rehs Contemporary in New York City will open their doors to the public for Taking Flight, a socially distanced exhibition, by RSVP only. The group show, initially scheduled for May 2020, is the gallery’s annual event partnering with the Art Renewal Center, which aims to revive realism in the visual arts. The participants include seven supremely talented artists who each have their own unique style, though all the featured work will include a feathery friend.

Throughout the history of art, depictions of birds are prominent and particular… whether it be a lofty dove, a preening peacock, or a majestic eagle. They are more than just decorative features; their presence is part of a rich history of symbols and hidden meaning. More generally speaking, birds can be seen as the embodiment of humanity’s hopes and dreams. Regardless of the message, there is a unique and important connection between visual arts and birds. With that in mind, the gallery has also partnered with the American Bird Conservancy to help raise awareness regarding threats to bird populations and the effects their dwindling numbers have on our ecosystems. While the presence of birds in artwork is prominent, it is superfluous… the presence of birds in the real world is a necessity.

One of the featured artists, Josh Tiessen, regularly experiments with a variety of subjects but often explores nature and wildlife in his works. With respect to his work Refracting Infinity, Tiessen delves into his fascination with the ‘golden ratio’. Discussing his inspiration, he remarked, “I was inspired by van Gogh’s whimsical sunflowers; despite his life of sorrow, he saw glimpses of the Divine through nature – this resonated deeply with me. I chose to depict two male Indigo Buntings weaving a nest inside a window, a metaphor for the wonder of string theory; again, a glimpse of the Divine through nature.” 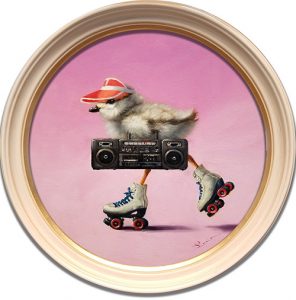 Another artist, Lucia Heffernan, seeks to give animals a voice and personality. Her work is an expression of her lifelong fascination with the creatures we share this earth with. As she puts it, “by imagining what animals might do if put in human situations, I shine a spotlight on both their innocence and raw instinct. This collision between animal and human sensibilities creates a whimsical, theatrical and often humorous world that viewers can relate to on an emotional level.”

Taking a more cosmic approach to his work, Rob Rey casts aside his personal feelings of self-importance as he ventures into compositions. His current series, entitled Bioluminescence, depicts fantastical glowing wildlife, or more simply the light of life. In his work he contemplates the vastness of space, and the rarity of life. “Each organism being the exquisite and detailed production of billions of years of evolution, life is precious.” He continues, “But the process of science has revealed a luminous, living planet; more intricate and amazing than we could have ever imagined.”

Regardless of how you view the other creatures that inhabit this planet alongside us, we each play a small role in their livelihoods – the air they breathe, the water they drink, and the trees they call home. “We should no more allow the loss of a species than destroy a masterpiece of art.”

Taking Flight will feature artwork from: Jasmine Becket-Griffith, Jon Burns, Natalie Featherston, Lucia Heffernan, Adam Matano, Rob Rey and Josh Tiessen. The exhibit will run from Thursday, October 15th through November 12th with viewing by appointment only. There will be a special socially distanced preview running from Thursday, October 15th through Sunday, October 18th – groups will be limited to no more than 5, including children, with a maximum capacity of 10 individuals at any given time. Please be advised that viewing appointments will be required for entry and limited to one hour. Masks and gloves will be available for those who need – in accordance with NYC mandate, masks must be worn at all times. Contact Rehs Contemporary now for opening event availability and to schedule your viewing now!