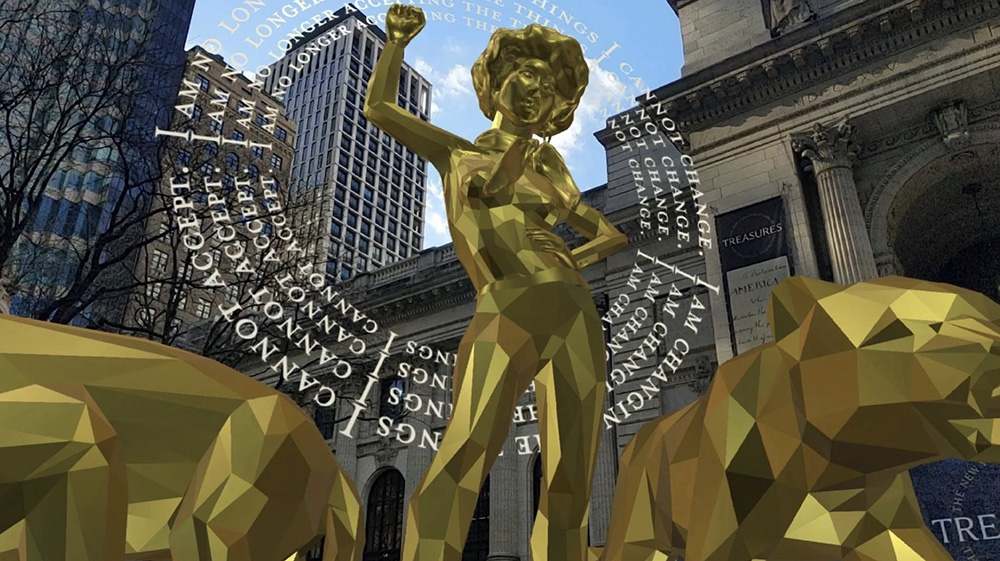 New York City claims to be “the best place in the world for women to succeed,” yet its public art tells a different story. 91% of the statues depict men. Why are there more statues of horses than notable women? The women-led artist and curator collective XRE (Extended Reality Ensemble) has transformed NYC’s most notable stone men into women and nonbinary people, kicking off a year-long installation.

#MakeUsVisible presents new digital monuments that make clear who is valued in our city’s public spaces. Public monuments express who and what matters to a culture. Despite New York City’s vibrant and diverse community, 53% are non binary or female, and almost entirely left out of that conversation. XRE’s core mission is to lift 4.5 million female-identifying and nonbinary voices to provide people of all genders a seat at the table in NYC.

Starting March 14th, XREnsemble will juxtapose digital monuments of gender diverse figures against statues of men across the city—locations include Times Square, Rockefeller Center, Central Park, The NYPL, Columbus Circle, and Grand Army Plaza. The interactive map available guides viewers to 31 virtual monuments shown in Augmented Reality, as an audio tour tells the stories of each monument. Using their smartphone screens, audiences can reveal a public landscape more empowering to all genders.

Check out the guided tour here.

Women in Tech Are the New Normal

A unique aspect of the #MakeUsVisible initiative is the usage of non-fungible tokens (NFTs) to encapsulate the contributions of the participants on the blockchain. NFT is a blockchain-stored certificate of authenticity for a unique digital or physical asset. The branded “Patron Tokens” is an immutable record of the MakeUsVisible project, its contributors, and supporters who seek to push the conversation of gender equity forward. The team is utilizing this technology to not only commemorate the project’s launch but also to explore the model of web3 vs web2 art patronage.

Find out how to get involved and support here.