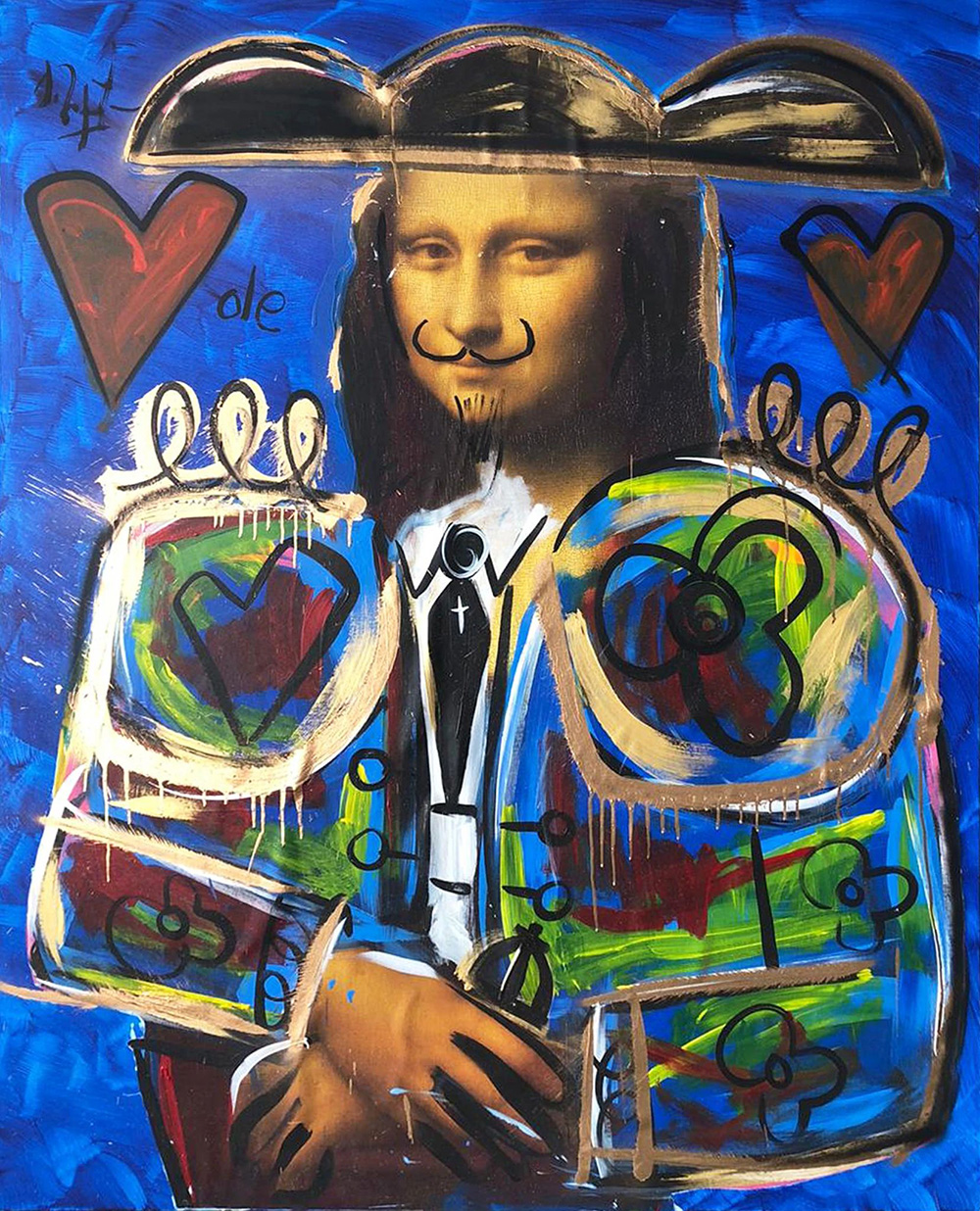 If you have not heard his name muttered in the art universe so far, well maybe you should. Meet Domingo Zapata. Dominic hails from Palma, the capital city on the sun-drenched golden island of Mallorca, Spain. He is a New York-based artist who, as of recent, has grabbed the attention of celebrities with his unique take on no other than the infamous Mona Lisa by Leonardo da Vinci.

Domingo became a full-time artist in 2002 and sold his first major painting, titled “Blue Horse”, to billionaire George Soros in 2005. In 2017, he launched a fashion collection at New York Fashion Week and also published his first novel, The Beautiful Dream of Life. Is there anything he can’t do?

Zapata’s most recent work, titled “Mona Lisa Bullfighter” has been catching news waves recently over its recent sale. The painting sold for over $1 million at a UNICEFItalia x LuisaViaRom charity gala hosted on the island St. Bart’s famed Eden Rock. The price of the painting originally started at 900,000 euros when it was unveiled at the gala, attended by a mix of celebrities and art dealers. Fun fact, another Leondardo, this time di Caprio, who has a few pieces himself by Zapata, bid on the new painting, however, pulled out at $500,000.

“A new record in auction for my career that will now be 100 [percent] donated to help children in need!”, said Zapata once the sale was finalized.

Other lucky owners of artwork by Zapata include Johnny Depp and Goldman Sachs. With a fan base like this, Zapata’s artwork must have a uniqueness that is making him one of the most sought-after artists at the moment. The uniqueness of Zapata’s paintings is most intriguing. Mona Lisa Bullfighter is a printed version of the original Mona Lisa, with graffiti-like paint strokes on top, looking as though the original had been urbanized.

Zapata claims that he “likes to work in series and themes;” and one of those themes is bullfighters from his Spanish heritage. When discussing the usage of an iconic Da Vinci painting and “vandalizing” it, Zapata revealed that his work is not intended to contradict the original or disrespect the artist.

“I admire the originals, but imagine what would happen to them if they were on the streets of New York,” he said. “So I write on them, use spray paint, and try to bring them alive in a more street, urban and contemporary way.”

Early on, the most that Zapata’s work has sold for was $250,000. Now, not even seven years later, his artwork is collected by stars known around the world, selling well over a million dollars as seen with “Mona Lisa Bullfighter”

“Mona Lisa Bullfighter” is not his only Mona Lisa rendition. Zapata used the iconic painting and the same vandalizing technique to place Mona Lisa on the cover of Playboy magazine.

Zapata creates over 100 pieces a year, mainly for commission, but he is also known for his dedication to charity and giving back to the community.

“I try to help organizations that I believe are working hard to help this world be a better place for everyone,” he said. “Being a good father is everything to me. I believe I have been given so much in life that I love to give back to charities.”

His work is even featured in the lobby of the United Nations headquarters in New York City. Zapata’s five-foot-long steel shark was created to raise awareness for the state of the oceans.

Mona Lisa Torero, along with countless other Zapata pieces, makes a mark on contemporary art while also mixing in elements of street life and his Hispanic heritage.