PHOTO FILE: Astronaut Edwin E. “Buzz” Aldrin Jr. posed for a photograph taken by Neil Armstrong beside the US flag deployed on the moon during the Apollo 11 mission on July 20, 1969.(NEIL ARMSTRONG VIA AFP/GETTY IMAGES)

As 45,000 Scouts from over 150 countries prepare to kick of the 24th World Scout Jamboree, the Boy Scouts of America (BSA) and NASA will come together to inspire today’s youth to expand their possibilities with a unique event that builds on Scouting’s iconic connection to the historic 1969 Moon landing. 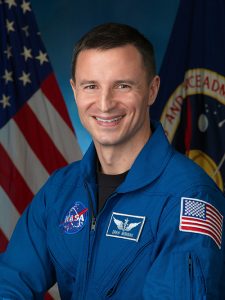 Fifty years after NASA astronaut and Eagle Scout Neil Armstrong sent greetings from space to participants of the 1969 National Scout Jamboree, NASA astronaut Drew Morgan will inspire a new generation of Scouts directly from the International Space Station as he answers questions posed by Scouts attending the World Scout Jamboree at Summit Bechtel Reserve in West Virginia at 1:30 p.m. EDT on July 24.

The World Scout Jamboree, which is held every four years, provides life-changing activities focused on adventure, sustainability, peace and community service. Inspired by the theme “Unlock a New World,” young men and women will celebrate the international tradition of Scouting during the two-week long 24th World Scout Jamboree that will take place in the United States for the first time since 1967.

For April McMillan, National Director of Programs for the Boy Scouts of America and former researcher at the Oak Ridge National Laboratory, the inspiration that Scouting provides young people is endless.

“Through every merit badge, adventure and service project, the programs of the Boy Scouts of America have been providing character and leadership opportunities for young men and women for more than a century,” McMillan said. “As this generation faces a new frontier of opportunities and challenges, the best thing we can do for these future leaders is to empower them with a sense of curiosity to explore the many wonders the world, and the self-reliance to find solutions within themselves, their communities and the world that surrounds them.”

And Scouts are doing just that. In fact, interest in exploration continues to propel Scouts who last year earned more than 175,000 space-related merit badges, including astronomy, engineering, environmental science, geology and space exploration, with the newest Exploration merit badge growing in interest by 60 percent in the last year.

For those young men and women and many others, “The Eagle has landed,” – the iconic words proclaimed by Neil Armstrong – hold special meaning as they dream of walking in the footsteps of the famous astronauts of the Apollo 11 mission, especially given the many connections between NASA and Scouting. While it is well known that Eagle Scout Neil Armstrong was the first man to set foot on the Moon, it was fellow NASA astronaut and Eagle Scout Jim Lovell who suggested that the lunar module be named Eagle. And five years before that, in 1964, NASA sent a group of astronauts on geological trips to the BSA’s Philmont Scout Ranch to introduce them to geologic concepts they might find on the Moon. Today, every Scout starting a backcountry trek at Philmont enters through the same doors and can stand in the same spot as Buzz Aldrin, Neil Armstrong and so many other incredible people went through before them as they consider the path and possibilities that await them.

SOURCE The Boy Scouts of America