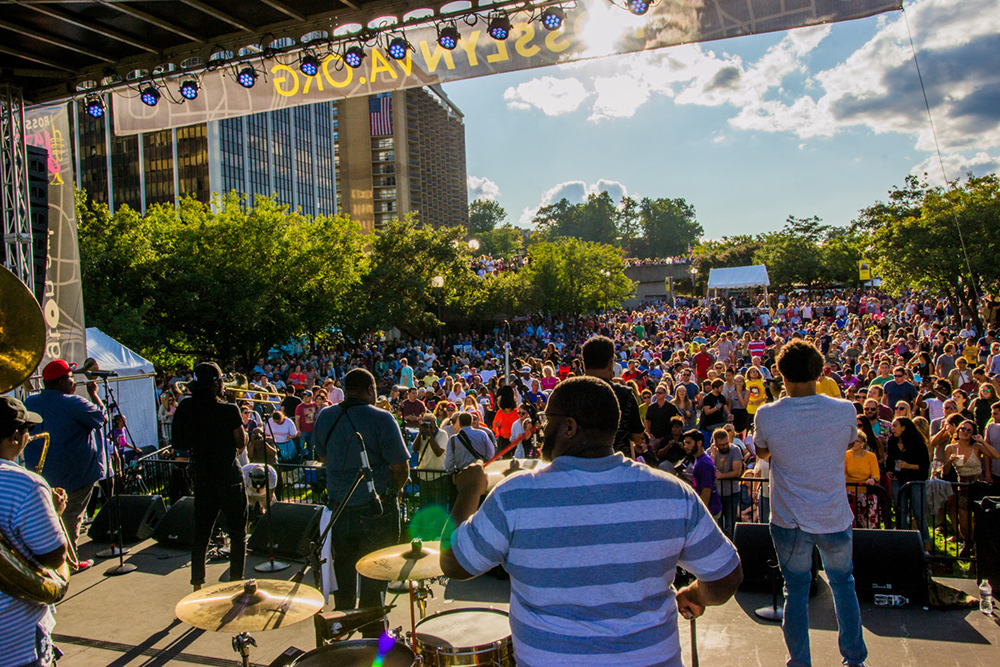 The Rosslyn Business Improvement District (BID) announced its lineup for the 30th annual Rosslyn Jazz Fest led by Cuba’s Cimafunk (“Top 10 Latin Artist to Watch,” Billboard). Other performers will include Mwenso & The Shakes, Delvon Lamarr Organ Trio, and Groove Orchestra. In partnership with the Rosslyn BID and Arlington Arts, this free festival will take place on Saturday, September 10, from 1 to 7 p.m. in Gateway Park (1300 Lee Highway, Rosslyn, Va.).

“Over the last three decades, Rosslyn Jazz Fest’s music and amenities have evolved and grown, making us the largest outdoor music festival in Arlington,” said Mary-Claire Burick, president of the Rosslyn BID. “Back and bigger than ever, we’re thrilled to host this year’s diverse lineup of artists, headlined by Cuba’s Cimafunk. We can’t wait to throw this party, connect the community through music, and celebrate in ways we haven’t been able to in the last few years.”

Both veteran festival fans and curious newcomers are welcome for this upbeat celebration of contemporary jazz in the heart of cosmopolitan Arlington. With an emphasis on international influences, the artists for this 30th-year milestone blend African, Afro-American, and Latino traditions, rhythm, and movement with conventional jazz expression.

“This festival represents the breakdown of long-established, rigid barriers between genres and highlights the contemporary direction of jazz festivals,” said Josh Stoltzfus, deputy director of Arlington County’s Cultural Affairs Division. “These bands bring eclectic styles, high level musicianship, and dynamic stage shows that will be the soundtrack for the summer’s best party.”

Attendees can experience the music alongside food trucks and fun programming for all ages. Stay tuned throughout the summer as we announce what you can expect to see there! Gateway Park is a 5-minute walk from the Rosslyn Metro station (Blue, Silver, and Orange lines) and several Metrobus stations. Bike and scooter parking is available onsite, and several Capital Bike Share stations are conveniently located nearby.

Cimafunk: Named by Billboard as a “Top 10 Latin Artist to Watch,” Cimafunk is by far one of the most exciting new faces in the Latin music space. As a singer, composer, and producer, this young Cuban sensation, backed by a seven-piece band, offers a bold mix of funk with Cuban music and African rhythms. By bringing out the best in Cuban rhythms and traditions and infusing sounds and styles from Africa and the U.S., Cimafunk is redefining contemporary Cuban music as well as Afro-Latin identity and the fusion of Black cultures. This year alone, Cimafunk performed at the New Orleans Jazz & Heritage Festival and will be participating in the Glastonbury Music Festival in June. Check out Cimafunk’s recent NPR Music Tiny Desk Concert here.

Mwenso & The Shakes: Mwenso and the Shakes are a unique troupe of global artists based in Harlem. Made up of immigrants from Sierra Leone, London, South Africa, Madagascar, France, Jamaica and New York City, they take their cues from the stylings of Fats Waller, Muddy Waters, James Brown, and many other American musical legends. Michael Mwenso leads an electrifying show The New York Times calls “intense, prowling, and ebullient.”

Delvon Lamarr Organ Trio: Delvon Lamarr Organ Trio — or as they are sometimes referred to, DLO3 — specializes in the lost art of “feel good music.” The ingredients of this intoxicating cocktail include a big helping of the 1960s organ jazz stylings of Jimmy Smith and Baby Face Willette; a pinch of the snappy soul strut of Booker T. & The M.G.’s and The Meters; and sprinkles of Motown, Stax Records, blues, and cosmic Jimi Hendrix-style guitar. It’s a soul-jazz concoction that goes straight to the heart and makes the body break out in a sweat. The trio is currently opening for Jack White and The Black Crowes as part of their summer tour.

Groove Orchestra: Groove Orchestra is led by multi-instrumentalist Samuel Prather who was born and raised in Washington, D.C. He has developed a reputation for performing with and producing all types of acts including Jazz, Funk, Gospel, Brazilian, Latin, Soul, and R&B. He has worked with Raul Midon, Fred Yonnet, Hugh Masekela, Cyrus Chestnut, Pharoh Saunders, and Bennie Maupin to name a few.