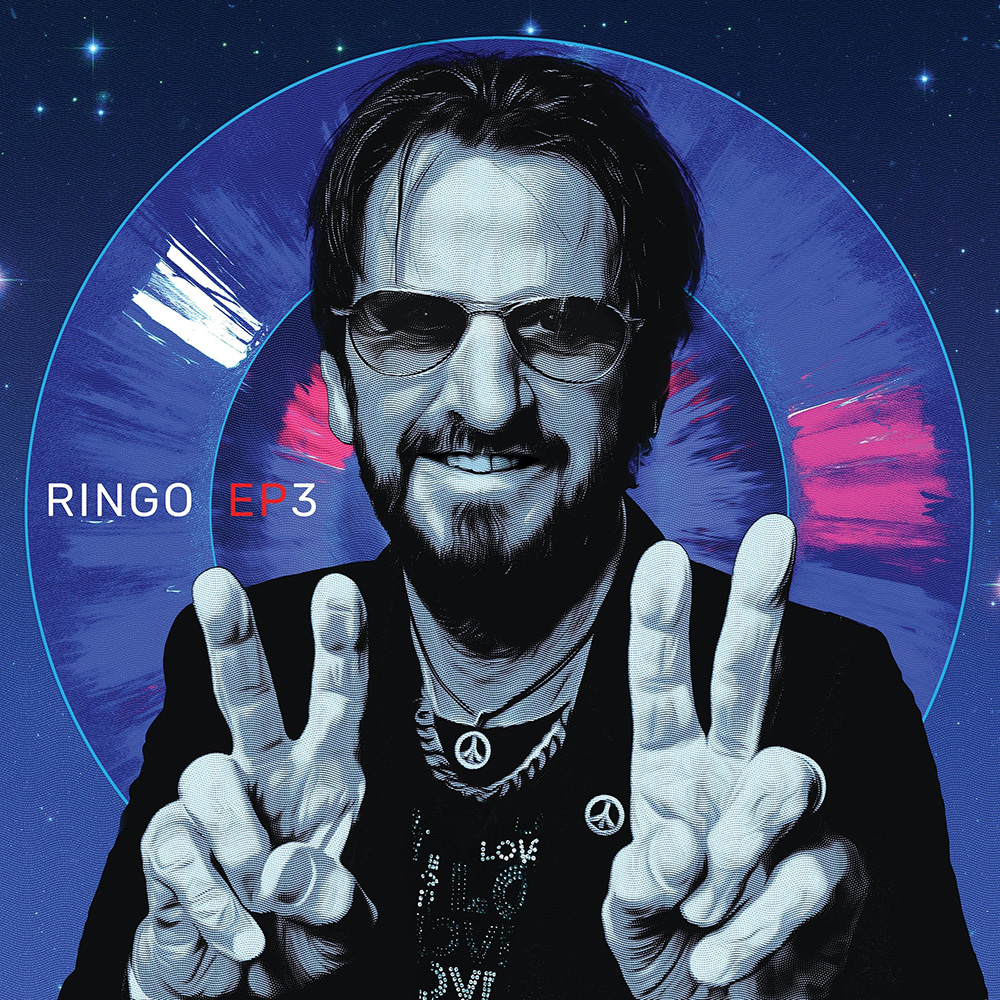 UMe released Ringo Starr’s third EP, titled simply – EP3. It is available digitally and on CD right now and will be available on 10″ vinyl and as a limited edition translucent royal blue cassette on November 18, 2022.

“Every song on this EP relates to Peace and Love. When I was in the Beatles we started looking at the world in the 60’s and thanks to the hippies a lot of us had a change of mind and peace and love and helping each other and being kind if you can became our goal. So I always look for songs that speak to that and all these songs have the same sentiment just written in a different way. I also love the magic of making a record. I have a lot of fun and I am open minded, and it’s great to see what happens.”

The result is four new wonderful offerings – “World Go Round”, “Everyone and Everything”, “Let’s Be Friends” and “Free Your Soul”. All the songs were recorded at Starr’s Roccabella West studio, where he also recorded his Change The World and Zoom In EPs, and they feature a familiar cast of collaborators including Steve Lukather, Linda Perry, Dave Koz, José Antonio Rodriguez, and Bruce Sugar (full credit listing below).

In just 4 tracks, Ringo covers a broad range of style and sound, beginning with the electrifying “World Go Round” which is also out on video today. It was shot in Ringo’s home studio by Brent Carpenter and it features Ringo, Steve Lukather and Joseph Williams as they record the track. Watch it here.

The soulful “Everyone and Everything” was written by Linda Perry, and it envelopes you in a warm sound from the start including its lyrics, “Show an act of kindness don’t expect it back. We could learn to be forgiving, maybe teach someone the same – everything needs changing today….” melodic, poppy and positive it is a classic Ringo song in every way. “Linda is so great, a lot of fun to be around and one of the most beautiful human beings, heart and soul, in the world,” Ringo said. “She wrote this track and I loved the sentiment of it.”

“Let’s Be Friends” was written by Ringo’s longtime engineer Bruce Sugar along with Sam Hollander and is upbeat with a funky groove. “I’d worked with Sam before but not in a few years so I thought it would be fun to do it again. Sam came up with the line, Let’s Be Friends, and I loved it. He built the rest of the song around it.”

“Free Your Soul” has surprised listeners by its tranquil and jazzy sound – written by Ringo and Bruce Sugar – it also features Dave Koz. As Ringo describes it, “Bruce had a start of a song and we had a line – that’s all we ever need – if we have one line we can write a song around anything and it turned out really well. And when we were recording it, we just kept jammin – it’s like 5 minutes long – and that turned out great because it gave Dave a chance to wail.”

The EP comes out while Ringo is on tour with his All Starr Band (Steve Lukather, Colin Hay, Edgar Winter, Hamish Stuart, Warren Ham and Gregg Bissonette). Ringo has been touring with All Starr Bands since 1989 and they have played nearly 500 shows. This iteration was welcomed back to the road on September 5 in Tanglewood where they performed to over 12,000 appreciative fans, 7,000 of them literally singing in the rain. The tour continues with shows this weekend in Florida at Ruth Eckerd Hall – which marks show #488 – then moving on through the States and into Canada and concludes October 20 in Mexico City, Mexico. Full tour dates are listed below.