United Airlines Flight 93 was soaring over Pennsylvania en route to Washington, D.C., on Sept. 11, 2001, when then-Defense Logistics Agency Director Navy Vice Adm. Keith Lippert ordered an announcement for all McNamara Headquarters Complex employees to shelter in the auditorium. Planes had already crashed into the twin towers of the World Trade Center and the Pentagon, and where the fourth plane was headed only God knew.

“The size of our building was a concern to me. It could’ve been a target,” Lippert said two months shy of the attack’s 20th anniversary.

Fear flooded the building’s basement as workers crowded together, some openly sobbing with worry that loved ones working at the Pentagon or on temporary duty at the World Trade Center had been caught in the horror. Others gazed in shock at overhead TVs, wondering how such tragedy and blood could spill over American soil.

John Morris, the former supervisor of the Document Automation Printing Service at the Pentagon, was watching news anchors report on the devastation in New York City when he and his staff heard what sounded like heavy furniture moving on the floor above. Stepping outside the office, Morris saw employees running, one warning of a bomb explosion. It was the hijacked American Airlines Flight 77 slamming into the building’s southwest corridor.

Back at DLA Headquarters, Shirley Bergman, then a contract specialist for alternative fuels, agonized and wept knowing her husband was at a Marriott between the two 110-story World Trade Center towers interviewing senior economists for the U.S. Census Bureau. And Matthew Woodruff, now a general supply specialist at DLA Distribution San Joaquin, California, was just a sophomore in high school. All but one of his teachers halted class as students watched the horrific story unfold via news broadcasts. 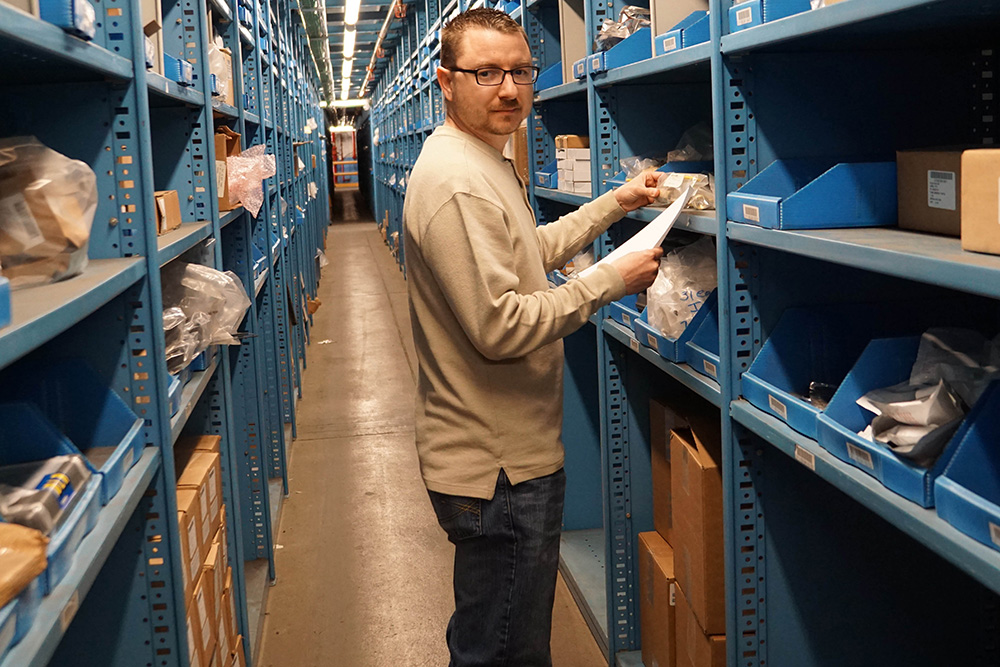 Matthew Woodruff, general supply specialist at Defense Logistics Agency San Joaquin, Calif., gathers supplies for a customer order April 3, 2000. He is one of hundreds of DLA employees who deployed to Iraq and Afghanistan to support warfighters on the ground following the terrorist attacks of Sept. 11, 2001. © Annette Silva, DOD

“I still remember how vivid it was. There was a lot of stuff my parents wouldn’t even let me watch on TV because of the nature of the event,” he said, admitting that, like most Americans, he’d never even heard the word al-Qaida until that day.

Lippert made another announcement that employees should go home soon after Flight 93 crashed in a field in Shanksville, Pennsylvania. Most were eager to return the next day even as the nation mourned and despite delays from increased security.

“We always talked about warfighters first, but this really brought it home,” he said. “The whole country responded more patriotically than we’d seen in the past, and I think everyone felt the importance of what they were doing.”

The Customer Interaction Center, where agents help callers place orders and find details like supply availability and delivery status, went to 24/7 operations on 9/11. Shamon Pratt, a customer service specialist who was then an agent, remembers the phone lines being eerily quiet for a couple of days before they rang off the hook, forcing management to hire more agents to handle the influx of calls. 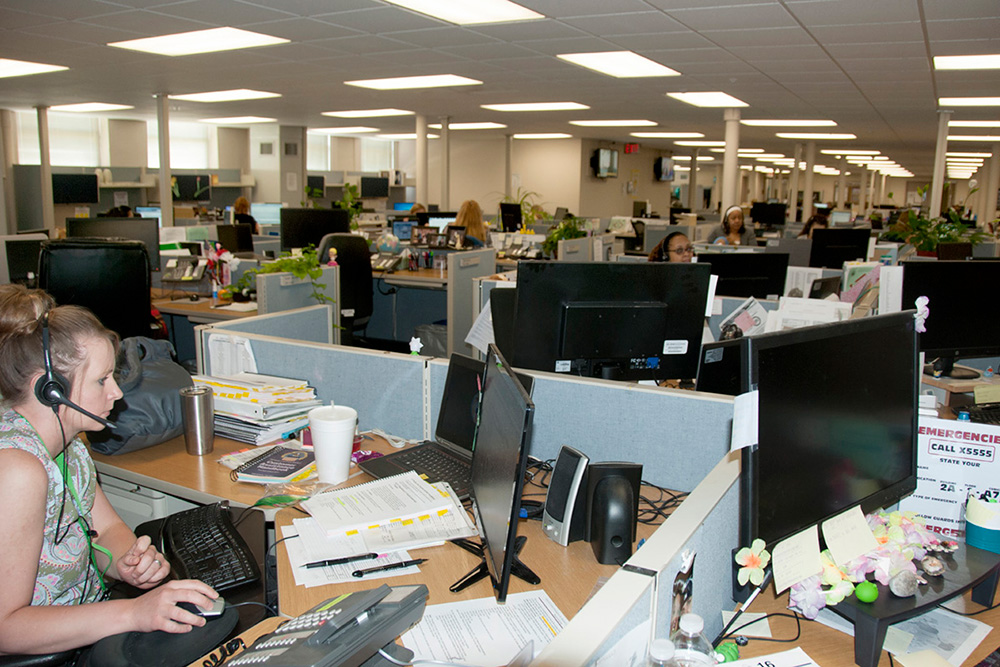 Employees across the agency scrambled to assist first responders. James Burke, a driver at DLA Distribution Norfolk volunteered to drive cots to the Pentagon for rescue crews working around the clock. Workers at DLA Distribution San Joaquin, California, and DLA Distribution Susquehanna, Pennsylvania, immediately began supplying items like boots, first aid kits and tents. And DLA Disposition Services staff provided gear including flashlights, shirts and sleeping mats requested by the Federal Emergency Management Agency for recovery teams in New York and Washington.
When the U.S. launched airstrikes Oct. 7 at al-Qaida and Taliban training camps in Afghanistan, acquisition specialists were already working with manufacturers to meet anticipated needs for aircraft parts, food and other items. DLA’s business doubled from $16 to $32 billion within a year of the attack, then $40 billion a year later.

On the Front Lines

The agency took logistics to the battlefield by deploying DLA Support Teams to work alongside uniformed customers. By the height of the wars in Iraq and Afghanistan in 2008, more than 40 employees worked on DSTs in Afghanistan, Iraq and Kuwait to provide fuel, contract management, disposal services and asset visibility while fielding the latest body armor. 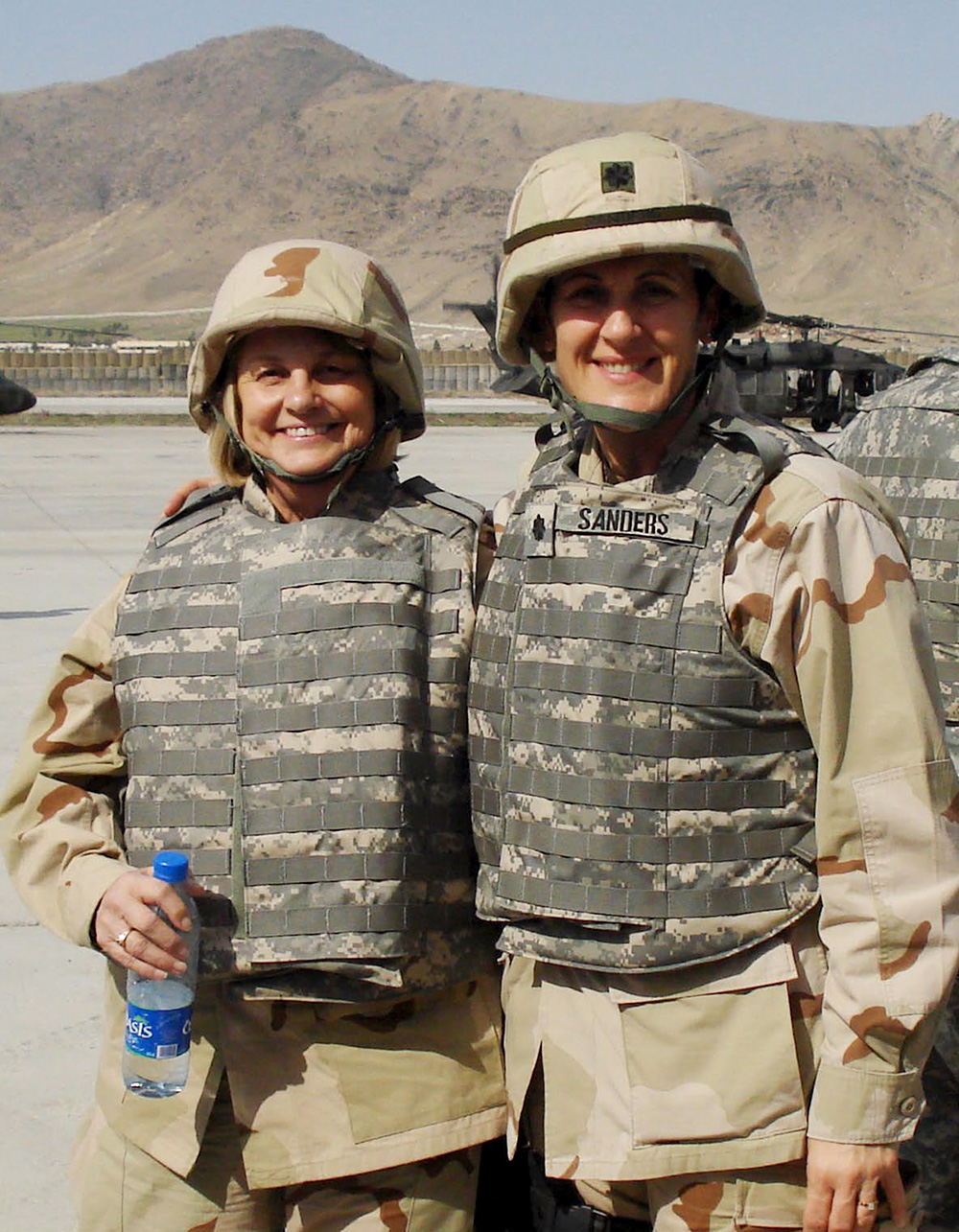 “The end result is what we all want — well-equipped, well-protected warfighters,” she said then.

Woodruff is another of the hundreds of DLA employees who’ve since left home to support forces in harm’s way. He deployed for eight months in April 2011 to DLA Distribution’s theater consolidating shipping point at Forward Operating Base Deh Dadi II, where he helped distribute the material to units on the ground.

The nation celebrated a victory during Woodruff’s time in the warzone, and again, he saw it unfold via television. At breakfast in the chow hall On May 2, he watched President Barack Obama announce that U.S. Navy Seals had killed Osama bin Laden, the mastermind of 9/11. 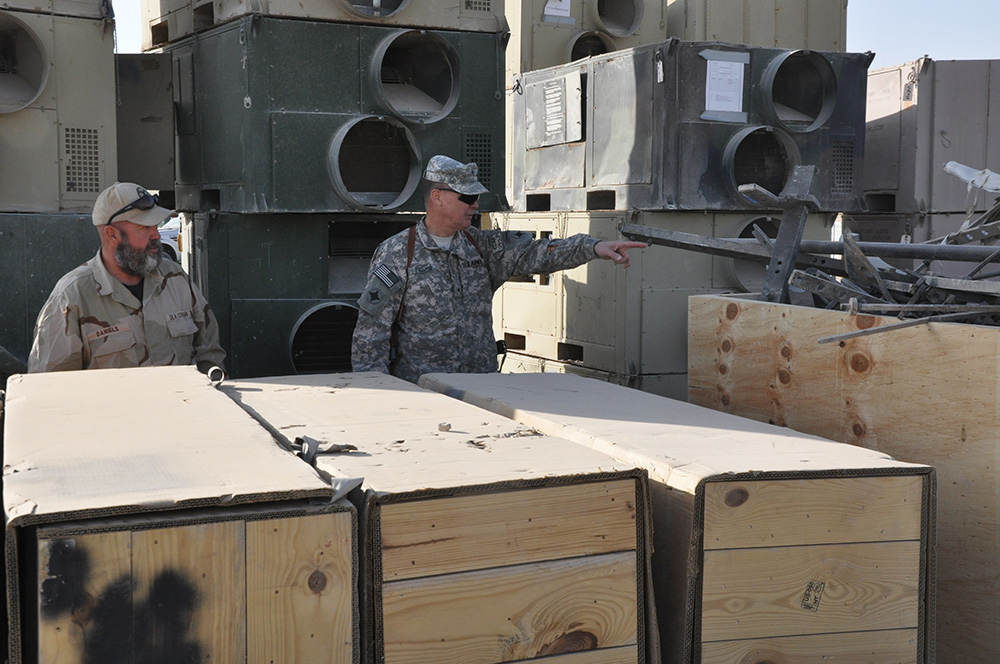 “I could have helped deliver the helicopter part that was used to transport those who found him. It was the littlest things — screws, washers, o-rings — that had the biggest impact there,” he said. “When you realize the part you help provide means there’s one less helicopter down, it becomes more than just a job.”

Twenty years after the tragedy that tested DLA’s ability to support simultaneous wars, Lippert still remembers stepping into the Pentagon one day after the attack. He was there to meet with senior officials on the amount of money DLA would have for the next year, a meeting he was originally scheduled to attend the afternoon of 9/11. 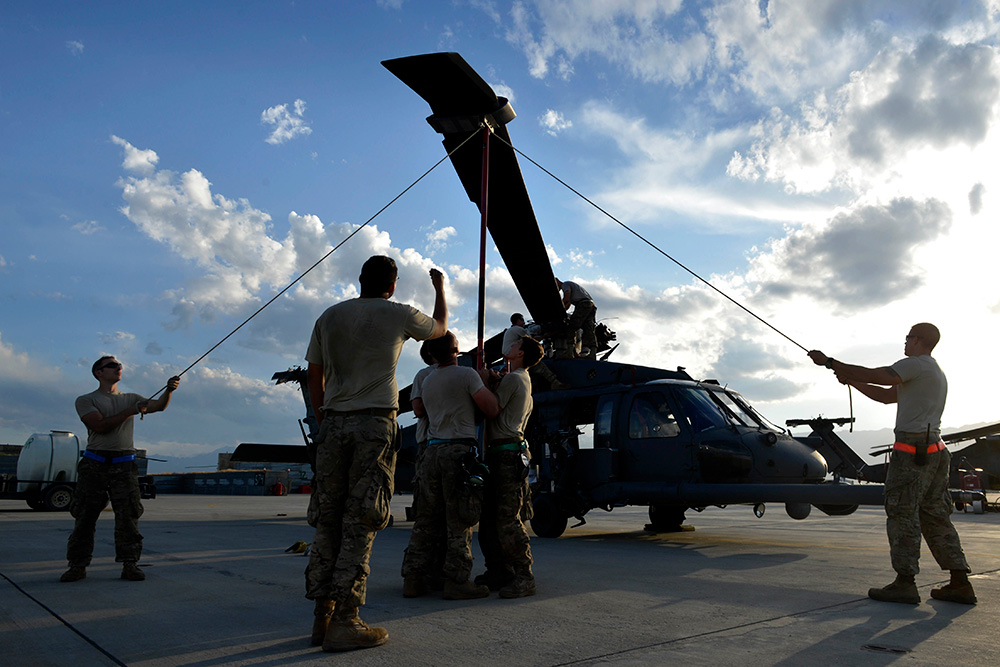 Airmen from the 455th Expeditionary Aircraft Maintenance Squadron break down a Pave Hawk helicopter at Bagram Air Field, Afghanistan, June 2, 2014. Hundreds of Defense Logistics Agency employees have voluntarily deployed to provide supplies like repair parts and food to troops in Iraq and Afghanistan since the war on terror began in 2001. © Air Force Staff Sgt. Evelyn Chavez

“You could hear a pin drop. You could still smell the smoke, and there were armed guards all over the place with rifles and machine guns, something I never thought I’d see,” he said.

DLA employees who’ve been in Iraq and Afghanistan in the past 20 years say their pre-deployment training left no doubt their lives would be at risk. They deployed anyway, and all but two came home alive. Stephen Byus and Krissie Davis were both killed while serving in Afghanistan.

The vicious, unprovoked attacks that ripped apart Americans’ sense of security 20 years ago resulted in the death of almost 3,000 people, 125 of them service members or Defense Department civilians and contractors. Those attacks remain the deadliest terrorist act in America’s history, and aftershocks of the atrocity ripple through lives even today. 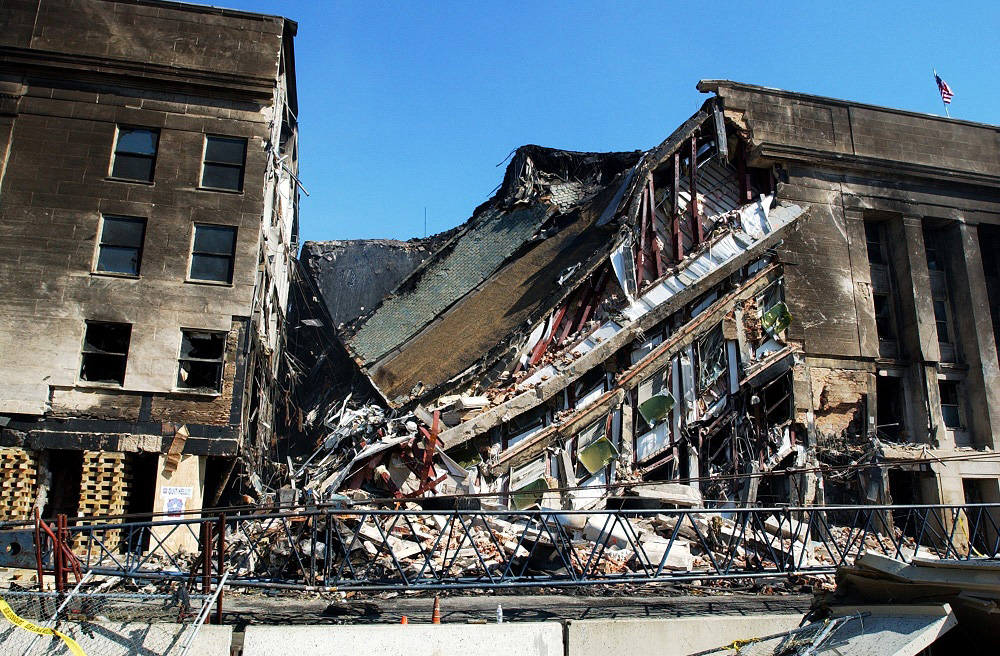 A section of the Pentagon lies in ruins following the deadly terrorist attacks in which hijacked American Airlines Flight 77 crashed into the Pentagon on Sept. 11, 2001. The attack killed all 58 passengers and six crewmembers on the flight and 125 people in the Pentagon. © Navy Petty Officer 1st Class Michael W. Pendergrass

“Just like the workforce of today, they understood that on America’s worst day, DLA must be at its best,” she said this week in a message to the agency. 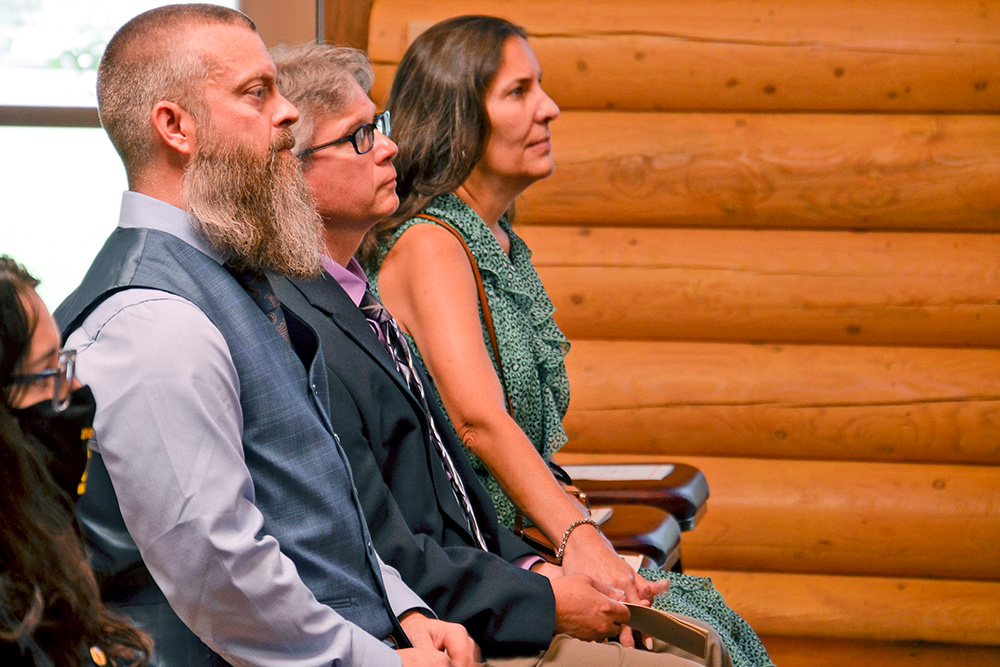 Curtis Mitchell, operations supervisor at Defense Logistics Agency Disposition Services Fort Bragg, N.C.; Rob Delong, retired site manager at Fort Drum, N.Y.; and Sandra Delong listen during a memorial ceremony for fallen soldiers and civilians at Camp Atterbury, Ind., July 3. Mitchell and Delong attended pre-deployment training with Krissie Davis in 2015 and Delong was with her when their vehicle was hit by an enemy rocket during an attack on Bagram Air Base in June 2015. © Jake Joy, DOD

The sharp memories of 9/11 urge employees like Woodruff to continually rededicate themselves to DLA’s mission. American pride is alive and strong among DLA’s members.

“9/11 taught us that we need to be resilient and not become complacent,” Woodruff said. “It’s like a game of chess. We need to be steps ahead of our adversaries.”