U.S. President Joe Biden won praise in Florida for his handling of the coronavirus pandemic, but registered voters still issued only tepid approval for his first 100 days in office, according to a statewide survey by the Florida Atlantic University Business and Economics Polling Initiative (FAU BEPI).

Overall, 45 percent of the 893 respondents approve of the job Biden has done so far, with 43 percent disapproving and 13 percent undecided. The Democratic president’s pandemic response and the economic stimulus package both drew 57 percent approvals among respondents.

Florida voted for Republican Donald Trump in both 2016 and 2020, and Biden’s numbers underperform in the Sunshine State compared to national polls, noted Kevin Wagner, Ph.D., a professor of political science at FAU and a research fellow of the Initiative. 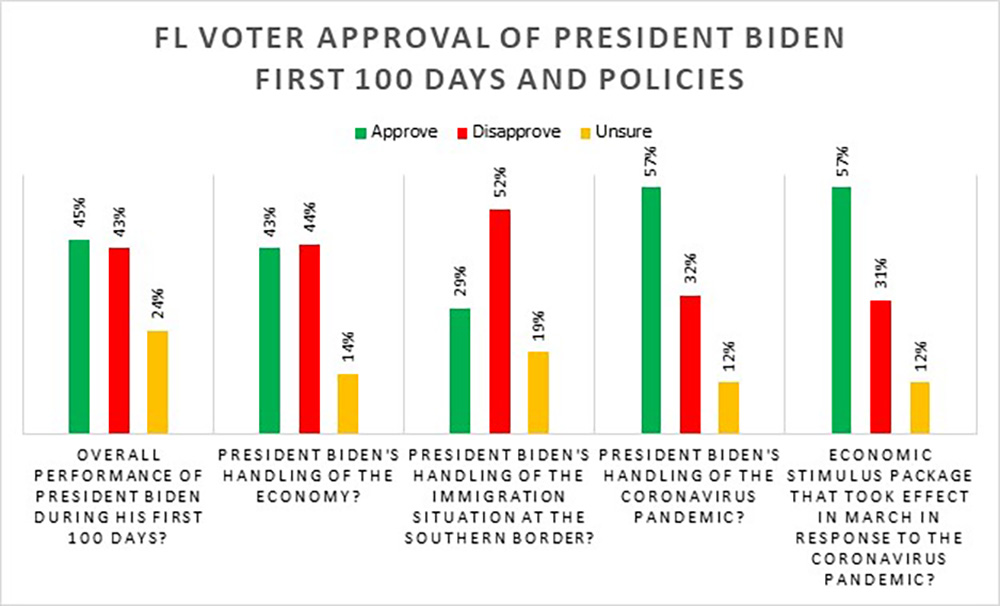 FAU poll respondents believe Biden has to improve his response to immigration and border policy, with 52 percent disapproving of his handling of the situation at the U.S. southern border, while 29 percent approve and 19 percent are undecided.

The poll results also point to concern about the overall mood of the electorate, with 57 percent being dissatisfied with the way things are going.

“After the pandemic ends, it’s going to be interesting to see what policies Biden puts in place to maintain his approval rating because a majority of respondents are dissatisfied with the way things are going,” said Monica Escaleras, Ph.D., director of FAU BEPI.

The Florida voters were split on Biden’s handling of the economy, with 44 percent disapproving and 43 percent approving.

Respondents were bullish on the American Dream, with a majority of Republicans (74 percent) and Democrats (52 percent) saying that’s easier to achieve in Florida than elsewhere.

The survey of registered Florida voters was conducted April 30-May 2. The survey has a margin of error of +/- 3.2 percentage points. The polling results and full cross-tabulations are available by clicking here.