Home / Business and Money / One-Third of Homebuyers Looked to Move Metros in Q3 2021, the Lowest Share Since 2020

Nationwide, 30.2% of Redfin.com users looked to move to a different metropolitan area in the third quarter of 2021, according to a new report from Redfin, the technology-powered real estate brokerage. This is down from 31.1% in the second quarter, marking the second-straight quarter of declines following four-consecutive quarters of increases.

Although the percentage of users moving to a new metro area in the third quarter declined, interest in relocation during the third quarter remained higher than it was a year earlier (29.2%) and before the pandemic (~26%).

The latest migration analysis is based on a sample of about 3.3 million Redfin.com users who searched for homes across 125 metro areas in the third quarter, excluding searches unlikely to precede an actual relocation or home purchase. To be included in this dataset, a Redfin.com user must have viewed at least 10 homes in a particular metro area, and homes in that area must have made up at least 80% of the user’s searches. 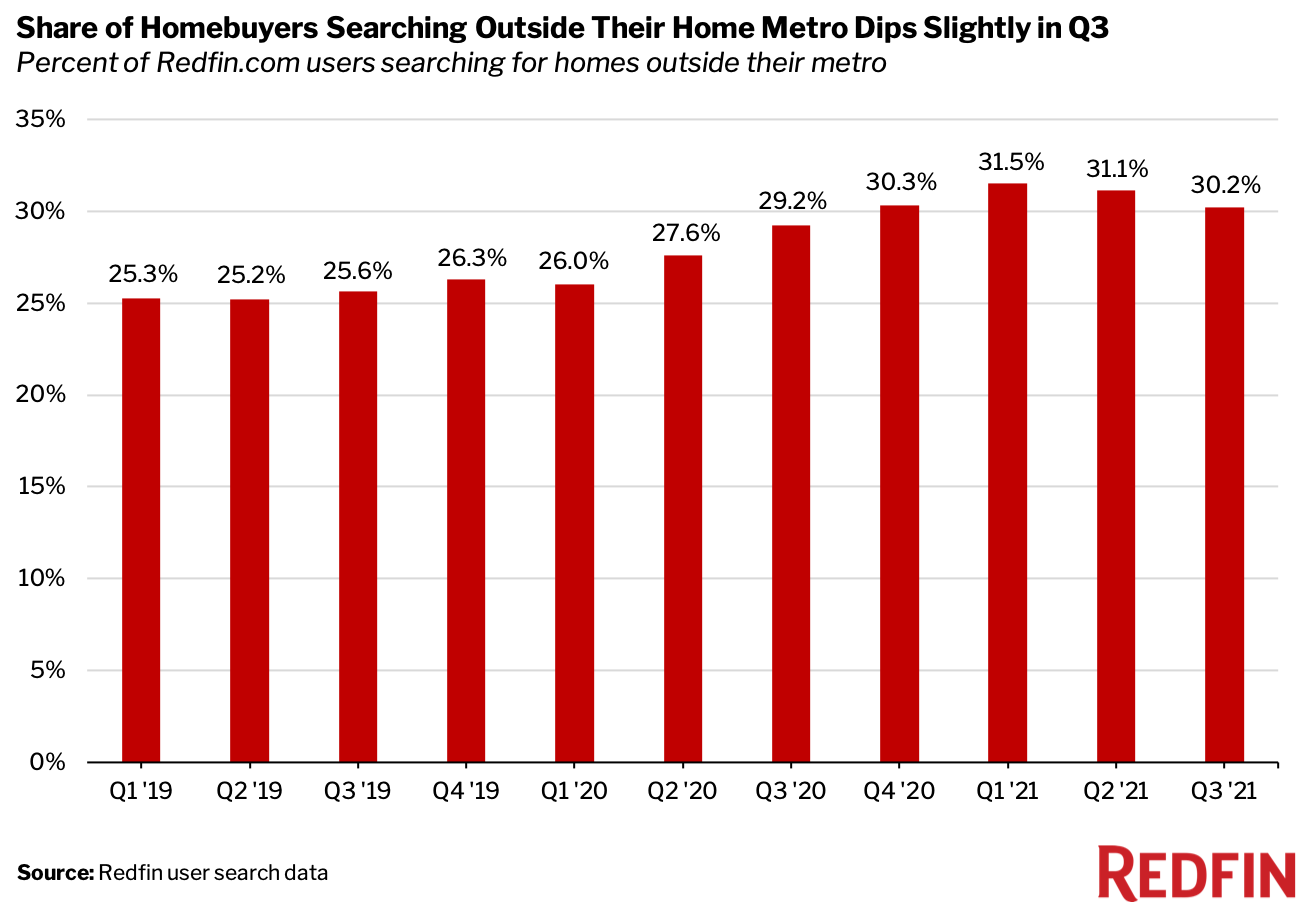 The slowdown in relocations has coincided with a cooling of the overall housing market: Homebuyer bidding wars, home-price growth and home-sales growth have all been falling. It’s worth noting that the housing market typically slows at this time of year.

While the migration rate has slipped slightly in recent months, it’s unlikely to fall back to pre-pandemic levels any time in the foreseeable future, according to Redfin Deputy Chief Economist Taylor Marr.

“We expect Americans to continue relocating at a higher rate than they did before the coronavirus pandemic,” Marr said. “As employers fight to retain talent during the ongoing labor shortage, they’ll face mounting pressure to introduce permanent flexible-work policies that will give more workers the option to move where they want. We’re also starting to see a resurgence in demand for vacation homes, which could help sustain the relatively high rate of house hunters searching outside their home metro.”

Miami, Phoenix and Sacramento Are the Top Destinations for Homebuyers Looking to Move

Miami, Phoenix, Sacramento, Las Vegas and Tampa were the most popular migration destinations of any major U.S. metros in the third quarter, meaning they had the largest net inflows. A net inflow is a measure of how many more Redfin.com home searchers looked to move into a metro than leave.

Metros that are warmer and more affordable than major job centers like New York and San Francisco often top the list of most popular migration destinations. They’ve become even more sought after during the pandemic because remote workers have been able to prioritize housing costs, space and weather over commute times.

In Sacramento, 41.7% of Redfin.com user searches came from outside of the metro in the third quarter, down from 50% a year earlier. San Francisco was the top origin for people searching for homes there.

“We’re not seeing as many buyers in Sacramento as we were at the height of the pandemic, but most of the buyers I do work with are still coming from the Bay Area,” said Sacramento Redfin real estate agent Dawn Marie Brown. “Remote work has become the norm for a lot of people—especially Silicon Valley tech workers—so they’re moving here to take advantage of the scenic countryside and high-quality schools.”

Pollock Pines and Pleasant Valley—neighborhoods east of Sacramento that were evacuated due to the Caldor Fire this year—are two areas that have recently become less popular, Brown added.

“Before the fire, there were so many people moving in from the Bay Area and overbidding on homes. Buyers in many towns east of Sacramento were offering tens of thousands of dollars over the asking price and still losing. That’s just not happening anymore. I do expect demand to rebound once the memories of the fires become more distant.”

San Francisco, Los Angeles and New York Are the Top Places House Hunters Are Looking to Move Away From

San Francisco, Los Angeles, New York, Washington, D.C. and Boston saw more Redfin.com users looking to leave than any other major metro areas in the third quarter, meaning they had the biggest net outflows. A net outflow is a measure of how many more Redfin.com home searchers looked to leave a metro than move in.