Home / People and Culture / Omar Parker: Producing From a Prodigy

While still an undergraduate, he had produced short films that premiered at Berlin, Cannes, Sundance, Tribeca, and Tiff. Even more amazing, he was one of the first individuals to ever be a producer on two separate Sundance shorts both in competition at the same time. He also was one of the youngest producers to be in competition in any category at Cannes, at the young age of nineteen. Other notable films include features ​The Burying Party (2018)​, which is currently available on Amazon Prime for streaming, and ​Luz (2019)​, which premiered at Sitges late last year. Undeniably, Omar is one of the most successful producers of his age. But what makes him so successful?

Patience and a relaxed attitude according to Omar. “So many filmmakers are in such a rush to make their film. Rushed work is never good work. Slow down. The film isn’t going anywhere. Do it right the first time.” He also says one of the keys to being a successful filmmaker is realizing that filmmaking is a business. “Filmmaking is all about making money. If you make your investors’ money, you get to make another movie. Too many directors are unaware that investors usually don’t care about your vision, or your inspiration. They care about how your movie is marketable.”

Another controversial opinion of the producing icon is his thoughts on film school. Despite having graduated from Montana State University he actively downplays it. “I learned next to nothing from my time in film school. Nearly all of my education came from producing movies in my own time. If you want to be a filmmaker, just start making films. The only reason I went to school is because I had to go to college anyways, my parents wouldn’t have had it any other way.” Admittedly Omar may not be the best person to ask. He himself has admitted to hating most independent film producing, and has moved into different forms of content.

Omar has begun a new venture, seeking to expand his success stories to web content, having started the webseries ​Captain’s Log,​ which can be found at their YouTube page of the same name, and soon at the now under construction captainslog.tv. The content aims to be a fan central brand, helping to explain and explore new events in the fandom. The webseries will also be a place of fan discourse and celebration. Omar has stated that he intends to host numerous series, some including some surprise guests in the near future.
So far the channel has garnered nearly nine thousand subscribers despite having only been around for ten weeks. When asked about why he founded the channel, Omar said he was aiming to produce more relaxed content. “…most of my life has been big franchises, fandoms, YouTube, and gaming. Making this kind of content is what I’ve always wanted to produce. I really do enjoy film producing, but I’m not a big art film guy.”

Despite this, Omar’s experience is nothing to scoff at and to many, the advice should be taken to heart. For more from Omar feel free to reach out to his channel or website. 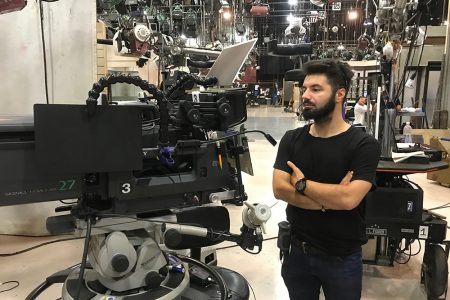