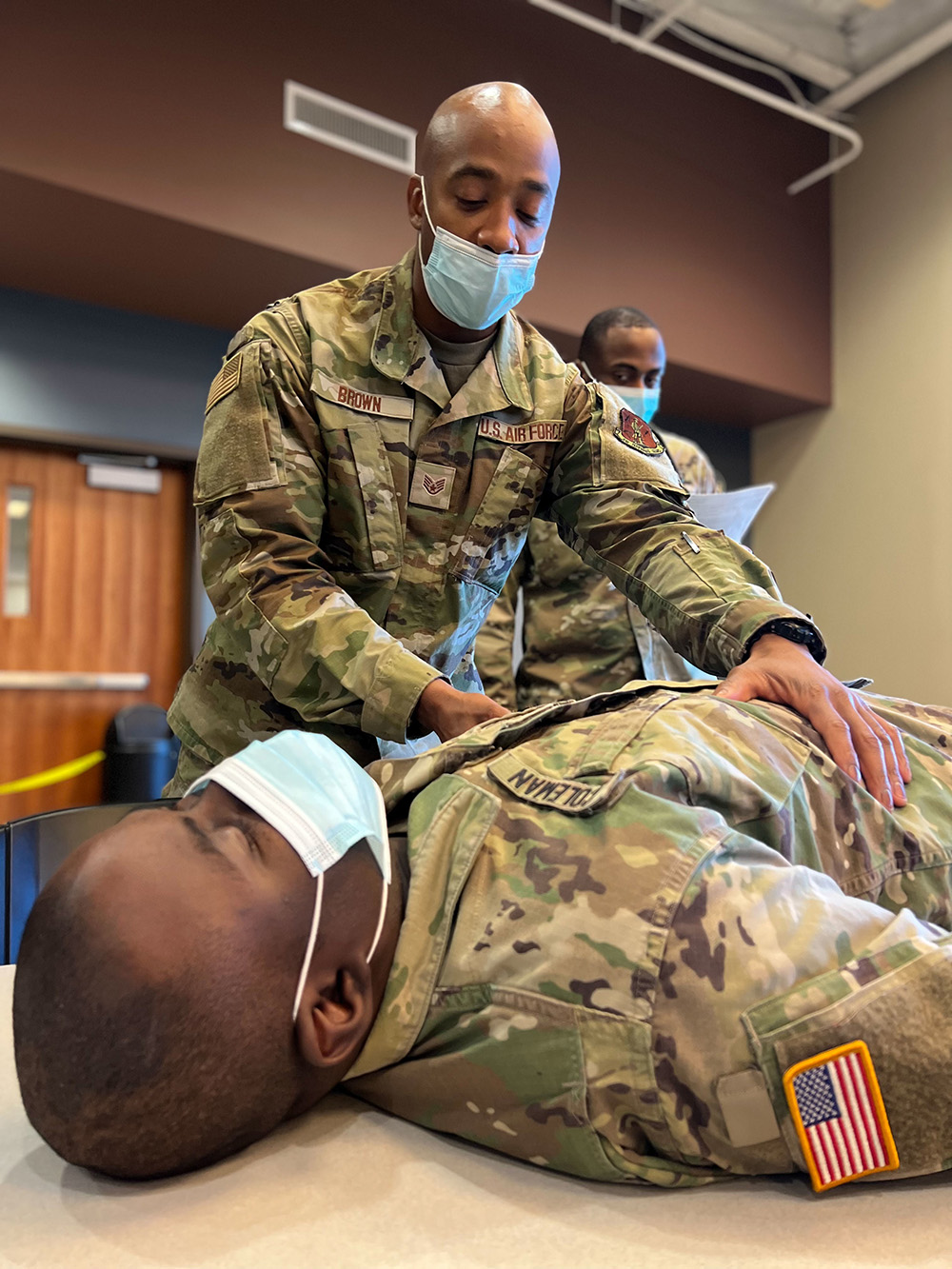 None of the 25 Soldiers and 12 Airmen are military medics; they’re volunteers halfway through a 180-hour program designed to turn National Guard men and women into emergency medical technicians.

“The trainers that we have are making sure we are equipped for the test and actual practical stuff in real life,” said Air Force Staff Sgt. Kenneth Brown, an air transportation specialist assigned to the 106th Rescue Wing and a police officer in civilian life.

The program, a joint effort of the New York National Guard and the New York State Department of Health, will provide 400 men and women with medical training they can use while on state active duty missions.

“I want to give these guys kudos,” instructor Andy Bershad said. “I’m very impressed with the professionalism and ability for these military students to absorb complex medical instruction at the rate the class is being taught.”

On Jan 18, another class of 40 troops was also underway at the Lexington Avenue Armory in Manhattan. Plans are in place to run nine more classes in New York City, Albany, Syracuse and Buffalo.

“The Department of Health and our New York National Guard have been working side-by-side to fight this pandemic since Day One, and I am proud to see this innovative plan between the two agencies come to fruition. When times get tough, New Yorkers put their heads together and find solutions,” Hochul said.

The Soldiers and Airmen are all on federal COVID-19 response orders. Those who pass the course will be certified by New York state as EMTs for three years.

The genesis of this training began in late December when the governor turned to the New York National Guard to help fill staffing shortages at nursing homes across the state.

Without enough staff, nursing homes and long-term care facilities could not accept as many patients. So people who could be released from hospitals, freeing up beds for COVID-19 patients, could not move into these facilities.

The New York National Guard was asked to provide Army Guard medics and Air Guard medical technicians to work at those facilities.

But of the New York National Guard’s 536 medical personnel — 372 Army Guard and 164 Air Guard — only 120 were not working in a medical field in their civilian job. So those were the Soldiers and Airmen who went on duty.

Taking Guardsmen from their civilian medical job, putting them in uniform and moving them to another health care workplace didn’t make any sense, explained Army Brig. Gen. Isabel Rivera Smith, the director of joint staff for the New York National Guard.

“They’re very excited about this course because it will give them an additional skill set to be able to use outside of the National Guard if they so choose to,” Smith said.

“I have broader knowledge of everything now, so that is going to be helpful,” said Alieva, an immigrant from Uzbekistan.

“It’s a great opportunity and I am glad to be here,” Zerella said.

Being able to help was what made Army Staff Sgt. Tyrone Price, a member of the 1569th Transportation Company and the class leader, sign up for the course.

A transit railroad motorman in civilian life, Price said his goal is to be prepared for emergencies.

“I just want to help out the best way I know how and the most professional way I can,” he said.

Army Spc. Robert Coleman, a member of the 719th Transportation Company and a postal worker in civilian life, said the class was important.