New listings of newly-built homes dropped 4.1% year over year to a seasonally-adjusted rate of 74,000 in August, reversing course after a 3.8% gain in July, according to a new report from Redfin. Meanwhile, new listings of existing homes grew 5.2%.

“There’s plenty of demand for new homes, but builders are facing a unique and costly set of hurdles as they attempt to satisfy that demand,” said Redfin chief economist Daryl Fairweather. “Listings of new homes aren’t bouncing back as quickly as listings of existing homes because, unlike individual homeowners, construction companies have to deal with lumber and labor shortages during the pandemic. They’re also competing for labor and materials with folks who are renovating their houses during quarantine. The lack of new listings is keeping builders from reaching their full potential in terms of home-sales growth.” 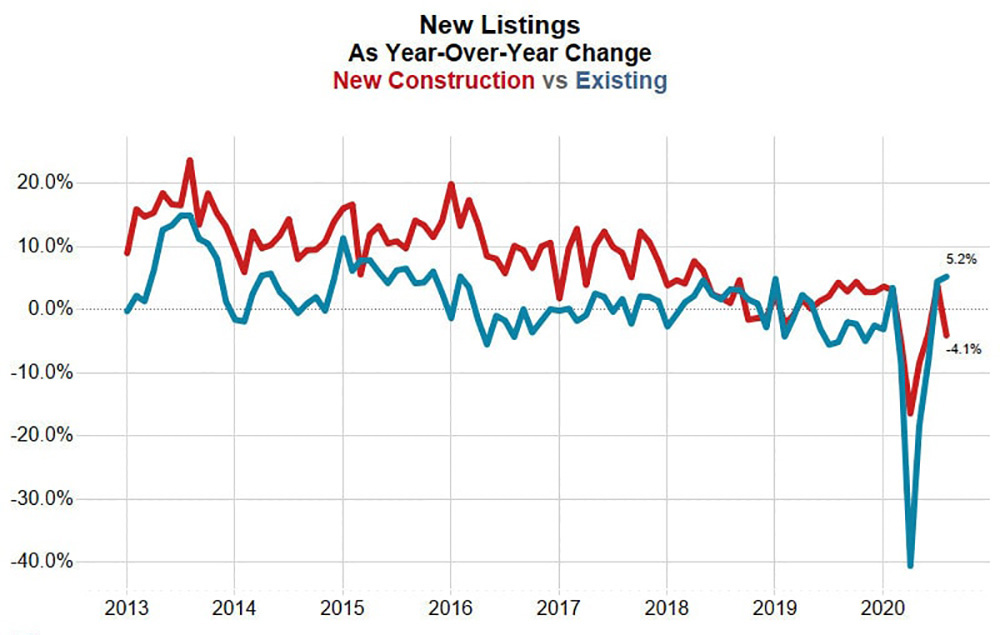 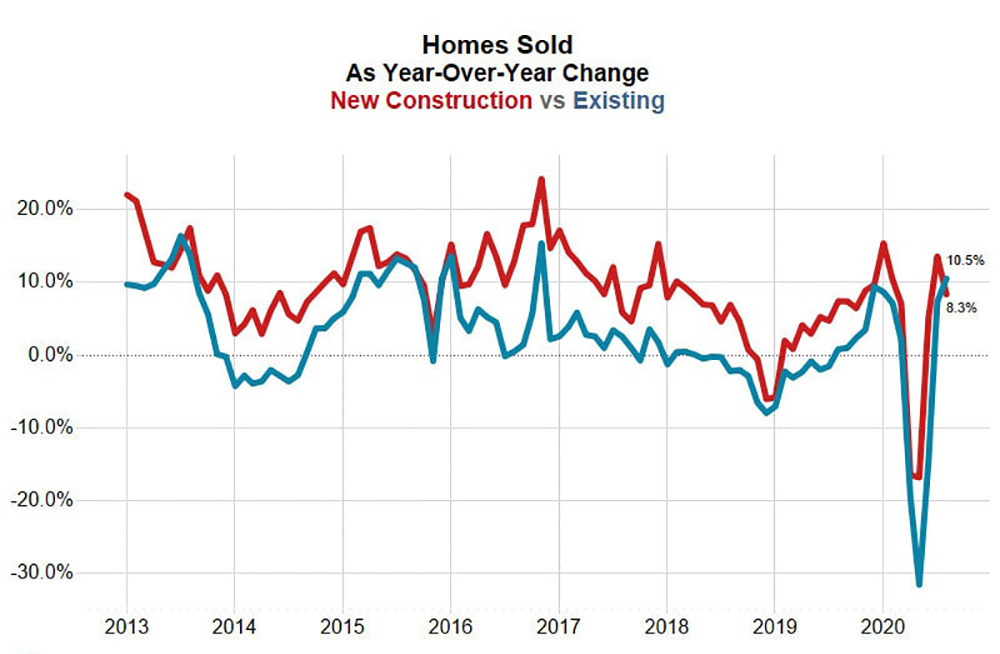 The supply of newly-built homes for sale sank 33.6% year over year in August to 185,000, while the number of existing homes on the market plunged 38.3%—the largest declines since at least 2013. 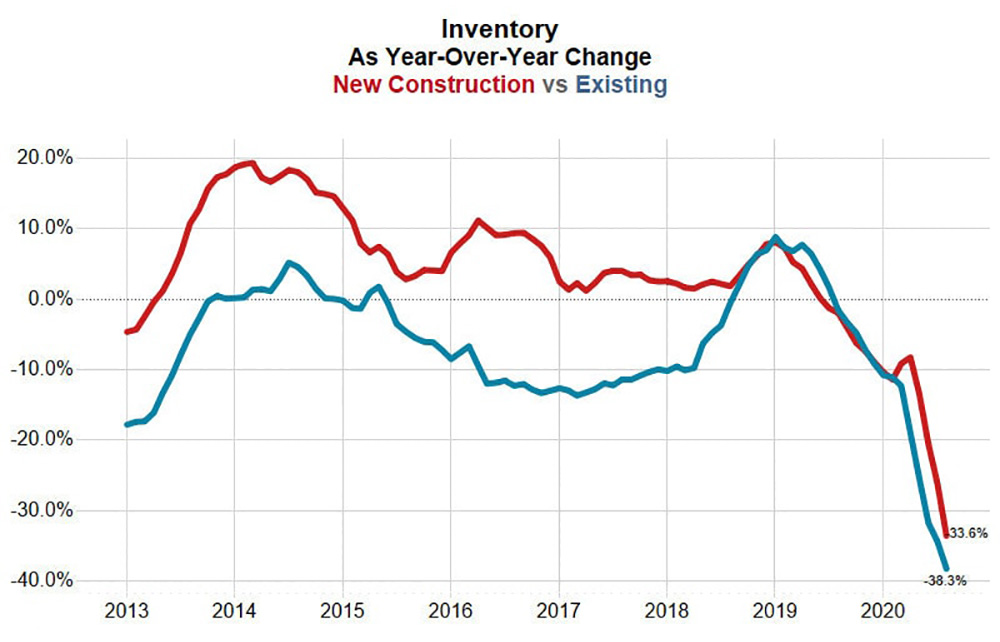 The acute dearth of homes for sale, paired with strong homebuyer demand due to record-low mortgage rates, is driving up prices. Newly-built homes sold for a median of $378,000 in August. That’s 4.1% higher than a year earlier, exceeding the pre-coronavirus (February) growth rate for the first time. Meanwhile, existing home prices rose 12.1% to a median of $316,000. Existing homes are typically more affordable, and consequently more desirable for many Americans, explaining the relatively high price growth. 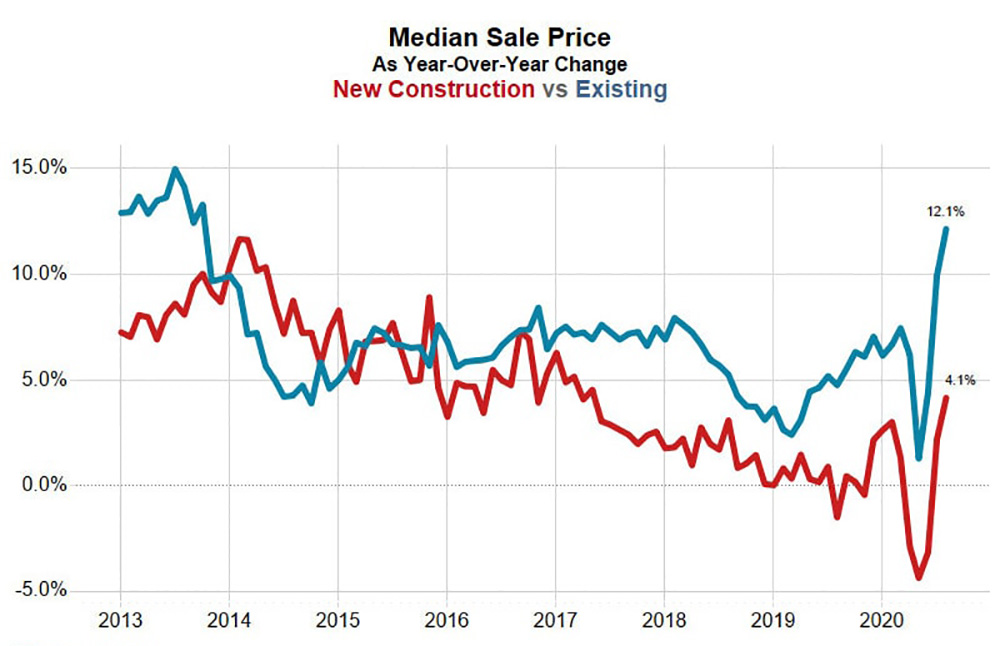 “Prices will keep going up if we don’t see a meaningful increase in the supply of new homes on the market,” Fairweather said. “Unfortunately, there are no signs that such an increase will occur anytime soon.”

Homebuilding activity slumped in August, the U.S. government reported last week. The number of housing starts dropped 5.1% from the prior month, while housing completions slipped 7.5% and building permits fell nearly a percent—intensifying the existing housing shortage.

Homebuilders seem to be optimistic about the future; builder confidence rose to an all-time high this month as record-low interest rates and a shift to the suburbs during the pandemic fueled homebuyer demand, according to the National Association of Home Builders. Still, the NAHB flagged several concerns, noting that lumber prices have skyrocketed more than 170% since mid-April, adding more than $16,000 to the price of a typical new single-family home.

“Historic traffic numbers have builders seeing positive market conditions, but many in the industry are worried about rising costs and delays for building materials, especially lumber,” said NAHB Chairman Chuck Fowke. “More domestic lumber production or tariff relief is needed to avoid a slowdown in the market in the coming months.”