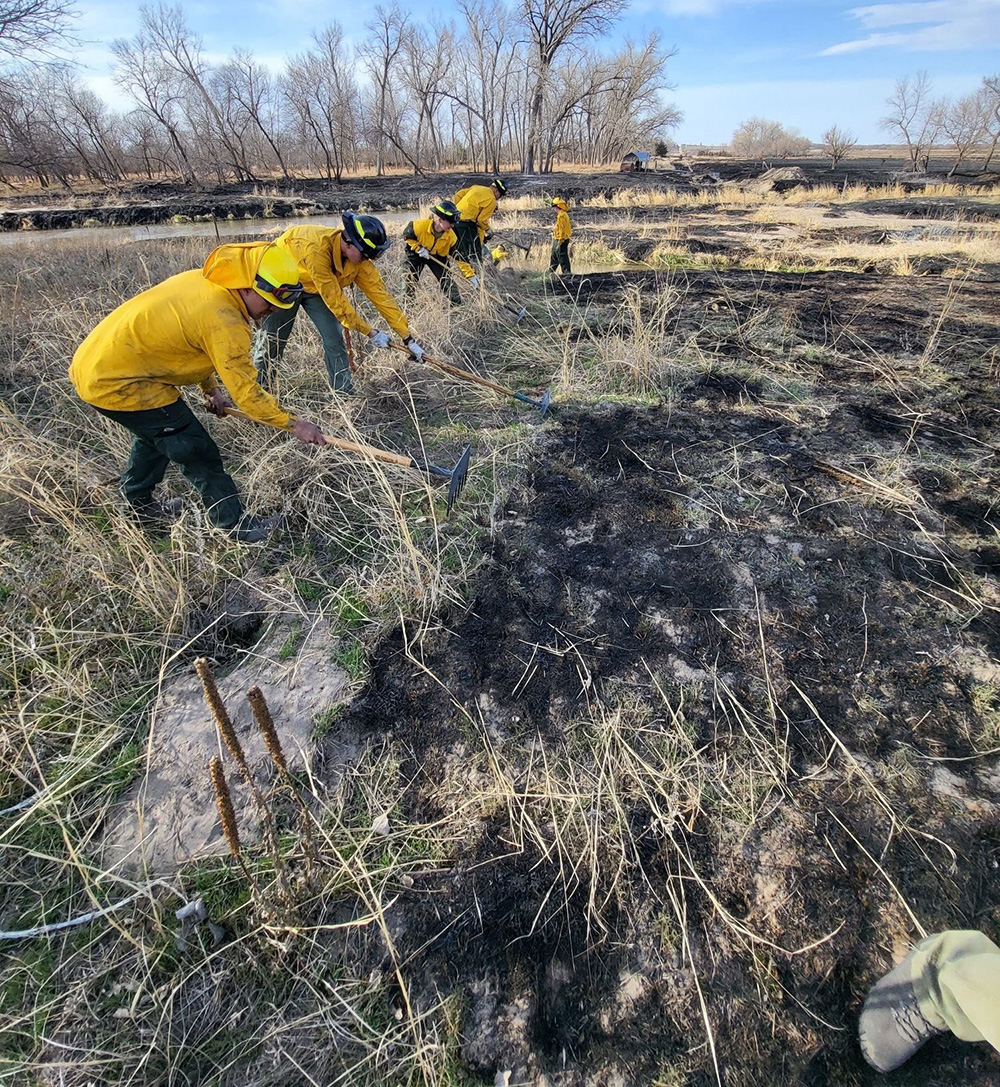 The Nebraska National Guard activated 38 Airmen and Soldiers to help battle wildfires from the air and ground in Gosper and Furnas counties April 8-12.

Two UH-60 Black Hawk helicopter crews, a 25-person wildland fire crew and support vehicles deployed to fight fires that had burned more than 30,000 acres and destroyed or damaged dozens of homes and other structures, fueled by drought and strong winds.

“This fire made several 180-degree shifts in direction, multiple times each day, giving it access to new fuel,” said Capt. Joshua Miller, commander of the 755th Firefighting Team (Headquarters), Nebraska Army National Guard. “Driving to the fire was also dangerous. On the road, it would go from good visibility to near-zero visibility with a gust of wind and smoke causing a ‘brownout.’”

The strong winds and smoke likely contributed to a deadly vehicle crash April 7, the day before the National Guard activation, when an SUV was struck head-on by a truck hauling water. Both vehicles were involved in the wildfire response. Darren Krull, chief of the Elwood Volunteer Fire Department, died at the scene, and Phelps County Emergency Manager Justin Norris was hospitalized with life-threatening injuries.

“As soon as we reported to the Arapahoe fire station where incident command was set up, we turned around and got to work out on the fire lines,” Miller said.

Some of the local volunteer firefighters had already been battling the wildfire for two days when Guardsmen arrived.

The Guard’s mission lasted five days. The helicopter crews made more than 150 water drops on smoldering hot spots, and the hand crews at work on the ground established 30-foot-wide fire breaks to deny the fire any additional fuel to spread.

The joint team of Air and Army Guard firefighters had just conducted wildland fire training in March at the Greenlief Training Site near Hastings, completing initial or refresher training for their red card certification.

Miller said the Guard members were eager to deploy and put their training to use to assist neighbors in a time of need.

“It was tough physically and mentally, but being able to lend a hand and support the citizens of Nebraska shows the importance of the National Guard,” said Senior Master Sgt. Rene Arriola, 155th Air Refueling Wing base fire chief.