Austin thanked the secretary general for all he’s done to hold the alliance together and modernize it. “NATO’s power comes not just from military might, but from its unity and sense of common purpose,” Austin said. “You have been an outstanding champion of those strengths. And we’re going to keep this alliance resilient, resolute and united.”

The secretary also thanked Stoltenberg for helping lead the alliance through the withdrawal from Afghanistan and evacuation from the Afghan capital of Kabul last month. Austin noted that after the al-Qaida attack on the United States in 2001, the alliance invoked article 5 of the NATO Treaty — an attack on one country is an attack on all. “NATO entered Afghanistan as a united alliance, … and 20 years later, NATO left Afghanistan as a unified alliance, thanks in large part to your dedication,” he said.

Austin praised Stoltenberg’s NATO 2030 plan that allied leaders agreed to during the Brussels Summit in June. “Allied leaders launched a bold set of initiatives to ensure that NATO continues to provide security to all of our citizens through 2030 and beyond,” Austin said. “We need continued investment in NATO’s deterrence and defense, as well as a revised strategic concept that will guide the alliance’s approach to the evolving strategic environment.”

When Stoltenberg took office in 2014, some critics said NATO was outmoded and unnecessary. Events since then have proven that’s not true. “NATO is as important as ever because we face a more competitive world,” Stoltenberg said. “We see Russia responsible for aggressive actions. We see more recently China is using its economic and military might, and we also face cyber threats, persistent terrorist threats, and also the security impact of climate change.” 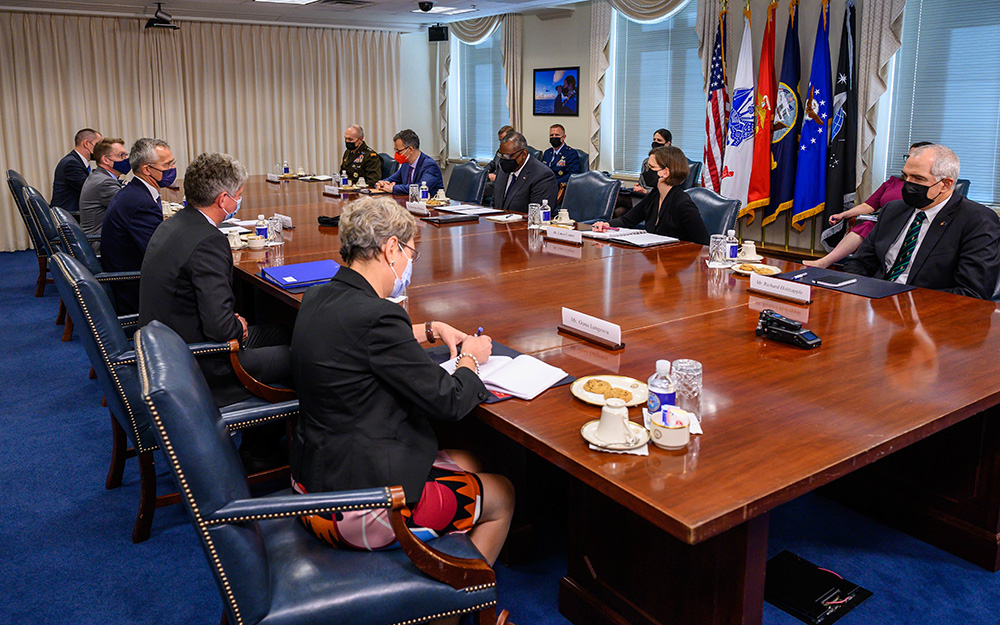 There is no country that can face these threats alone, the secretary general said. “We have to stand together, North America and Europe in NATO, and need to adapt the alliance to [the] changing security environment,” he said. “And that’s exactly what we are doing.”

The allies have bought into this picture. He noted that Canada and the European allies have added an extra $260 billion to their budgets since 2014. More nations have met the alliance goal of spending at least 2 percent of gross domestic product on defense.

Even though the operations in Afghanistan are over, they were not in vain, Stoltenberg said. “For 20 years, we were able to prevent any type of attack organized from Afghanistan against our countries,” he said. “And we will continue to work together to make sure that we preserve the gains made in the fight against terrorism.”

The lesson from Afghanistan and from the uncertain times is the need for unity, he said. “The crisis in Afghanistan does not change the main message: the need for Europe and North America to stand together in a strong NATO,” he said.

The two men will meet again during the NATO Defense Ministerial later this month.