When Air Force Gen. Richard B. Myers first heard of a plane flying into the World Trade Center on Sept. 11, 2001, he wondered how someone, on such a beautiful cloudless day, could do that.

Myers, a career pilot, who flew Wild Weasel missions over Vietnam hunting for enemy surface-to-air missiles, was on Capitol Hill that day preparing for a confirmation hearing to make him chairman of the Joint Chiefs of Staff.

When the second plane hit the other World Trade Center tower, he knew it was an attack.

Myers retired from the military after serving as chairman in 2005. He is now the president of Kansas State University in Manhattan, Kansas, and he spoke about his experiences on September 11, 2001, in an interview.

Although Myers was the vice chairman, on that day he was serving as acting chairman as Army Gen. Hugh Shelton was over the North Atlantic heading to NATO meetings in Europe.

“I got back and there was some talk about going to the continuity of government site, but I asked if the (National Military Command Center) was operating and we just headed there.”

So, one side of the Pentagon was on fire, while on the other side of the building America’s defense leaders were putting into place defenses against further terrorist attacks in the United States, on U.S. military bases overseas or against allies and partners.

“We knew pretty quickly that al-Qaida was behind the attacks,” Myers said. 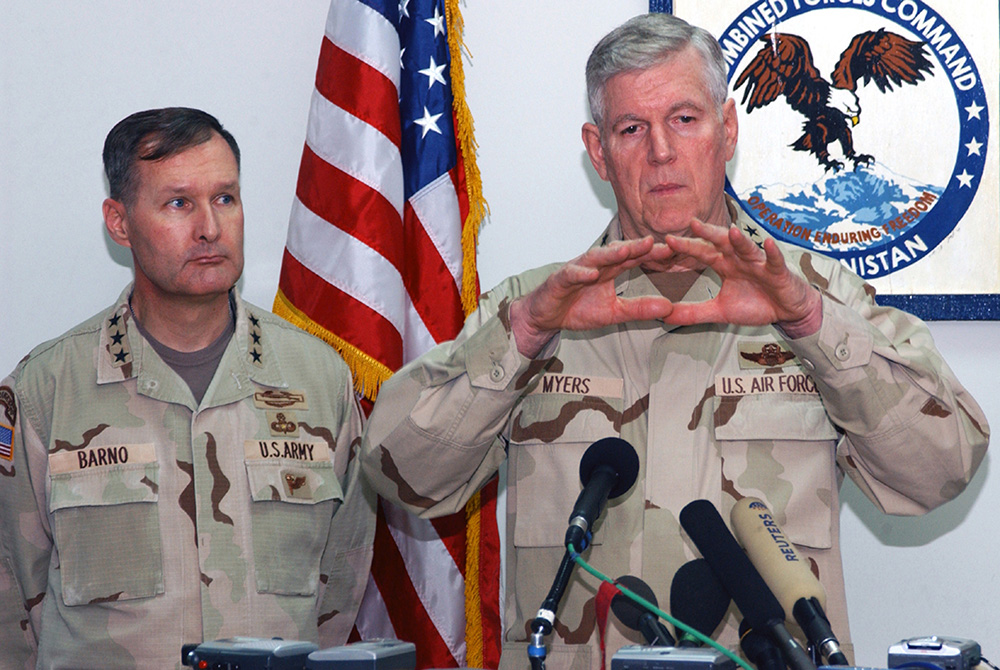 Air Force Gen. Richard B. Myers, then-chairman of the Joint Chiefs of Staff, discusses the big picture regarding the relationship between U.S.-led coalition forces and the government of Afghanistan during a joint news conference March 16, 2005. He is standing with Army Lt. Gen. David Barno, commander of Combined Forces Command-Afghanistan. Myers was making his sixth or seventh visit to Afghanistan since December 2001, while Barno had served nearly 18 months in Afghanistan. © Sgt. 1st Class Darren D. Heusel

The United States knew Osama bin Laden was a danger and was looking for ways to get him before 9/11. “The [problem with] our intelligence at the time was we knew where he was, and where he had been, but we never knew how to predict where he was going to be,” Myers said.

Looking back on the events of 9/11, Myers is proud of the way service members and DOD civilians responded to the attack. Even as half of the building still burned, thousands of Pentagon employees queued up to enter the building the next morning to do what they could to move forward.

That weekend at a Camp David meeting then-President George W. Bush gave the order to bring those who launched the attack to justice. “That was our marching order,” Myers said.

Looking back two decades later, Myers thinks there are still lessons to be learned. The main one he stresses is the need for any effort like this to be a whole of government approach. “One of the things that occurs to me is … that we’re over reliant on the military instrument of power,” he said. “Every problem turned out to be a military problem.”

The State Department, the Treasury Department, the Department of Homeland Security, the intelligence agencies, and more need to meld together to address any threat facing the United States, its citizens and national interests. “I think that was a huge mistake early on, not asking State and Treasury and Commerce, Justice, to participate,” he said. “We said from the beginning that the military, alone, was never going to solve the problem of Afghanistan. ”

“The War on Terror is really a war of ideas more than anything else,” he said. “The military can do only so much in that.”

He noted that the Founding Fathers were afraid of concentrating too much power in the federal government. “James Madison would be proud: We were not very efficient,” Myers said. “And we are not efficient when it comes to things like Afghanistan, where you need the whole of government, all of national power, to come to play on that.”

As an aside, Myers said he is always surprised by the connections that still exist from 9/11. When he was on Capitol Hill, he didn’t take an aide with him. He just grabbed a young Army intern Capt. Chris Donahue, to come along with him. Twenty years later, Army Maj. Gen. Chris Donahue, the commander of the 82nd Airborne Division, was the last American out of Afghanistan. “He saw the start and he saw the end,” Myers said.

Myers understands the importance of 9/11 on his legacy. His official portrait that hangs in the Joint Chiefs of Staff hallway in the Pentagon has a small picture of him standing in front of the burned out wedge of the building.