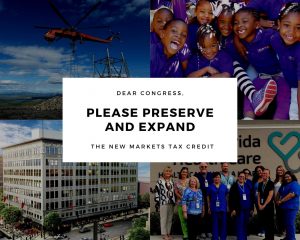 “As the New Markets Tax Credit nears its expiration at the end of 2019, we hope Members will take note of its broad support,” said Kermit Billups, President of the NMTC Coalition and EVP, Co-Founder at Greenline Ventures. “The letter was signed by nearly a thousand organizations, representing all 50 states, Washington, D.C. and Puerto Rico, and located in every type of community, from rural areas to urban neighborhoods, and everywhere in between. Why? Because they have seen firsthand the success of NMTC in revitalizing communities, creating jobs, increasing economic opportunity and improving lives.”

Established in 2000 in the Community Renewal Tax Relief Act (P.L.106-554), the New Markets Tax Credit is a bipartisan effort to stimulate investment and economic growth in low-income urban neighborhoods and rural communities. The NMTC was most recently provided a five-year authorization in The PATH Act. (P.L. 114-113) in December 2015. There is great bipartisan support for NMTC in Congress: 32 Senators signed on in support of S. 750, which was introduced by Senators Roy Blunt (R-MO) and Ben Cardin (D-MD); in the House, H.R. 1680 has 109 cosponsors, led by Reps. Terri Sewell (D-AL), Tom Reed (R-NY), and 24 members on the Ways and Means Committee.

The NMTC works by providing a shallow federal tax credit of 39 percent, taken over seven years, for investments made in census tracts where the individual poverty rate is at least 20 percent or where median family income does not exceed 80 percent of the area median. Last year, more than 80 percent of all NMTC investments were in communities exhibiting severe economic distress with extremely low-incomes, high unemployment, or high poverty. Over the past 15 years, communities have come to count on the NMTC as a source of low-cost capital for challenging projects that would not have been possible but-for the NMTC. Since 2003, the Credit has delivered well over $100 billion in flexible capital to farming towns and urban neighborhoods left outside the economic mainstream.

“Despite an exemplary track record in revitalizing some of the poorest communities in our country, financing over 6,000 businesses, hospitals, daycare facilities, and manufacturing expansions and creating some one million plus jobs, the future of the NMTC is in jeopardy,” said Bob Rapoza, spokesperson for the NMTC Coalition. “Without an NMTC extension, many of America’s urban neighborhoods and rural communities, struggling with high rates of poverty and unemployment, will lose access to billions of dollars for high-impact, community revitalization projects. No other the federal tax incentive is generally available to economically distressed rural and urban communities to promote economic revitalization making a permanent extension and expansion of the New Markets Tax Credit vital.”

For examples of how the NMTC is making an impact in each state, see the NMTC Coalition’s 2019 NMTC Progress Report, State Impact Map or check out its Project Database.