MEET YOUR STAR, the world’s first digital platform that enables fans to chat live with their favorite stars and talents via one-on-one video connections, has launched today. The pioneering platform creates a split-screen video recording of each conversation between a user and star, which the user can share on social media once the star releases the video. “We developed a revolutionary technology that enables an entirely new form of communication between stars and fans,” says Georg Kindel, founder and CEO of MEET YOUR STAR, headquartered in Vienna, Austria, and New York City. “Due to the global pandemic, many stars cannot appear on stage or work on film sets right now. This platform gives talents the opportunity to inspire others from the comfort of their homes, to offer a once-in-a-lifetime experience to their fans and to create an entirely new revenue stream, while supporting charitable causes in the process.”

“While we can’t go to the theater, attend concerts or shows and see our favorite stars live in action right now, MEET YOUR STAR brings them directly into the homes of their fans,” explains MEET YOUR STAR partner and COO Christina Zappella-Kindel. MEET YOUR STAR also offers an additional service for booking personalized video shoutouts. 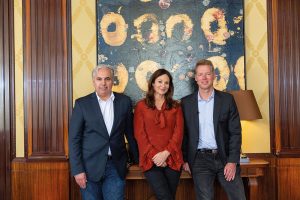 Patrick Knapp-Schwarzenegger as partner and investor, US rollout in early 2021

Hollywood attorney Patrick Knapp-Schwarzenegger, whose clients include Nicolas Cage, Jason Statham and Jackie Chan as well as his uncle Arnold Schwarzenegger, joined MEET YOUR STAR as partner and investor. Together with Kindel and other industry partners and investors, he will grow the platform into a major venture in the US in 2021. MEET YOUR STAR launched with a focus on German-speaking stars in Europe, a 100-million-person market. The US rollout is set to begin early next year.

A veteran in the entertainment industry, MEET YOUR STAR’s founder Georg Kindel’s previous projects include a decade-long partnership with former world leader and Nobel Peace Prize laureate Mikhail Gorbachev. Gorbachev and Kindel established and hosted the World Awards and Women’s World Awards together as events televised globally from Hamburg to New York. The illustrious group of award winners with whom Kindel has worked for these shows includes Paul McCartney, Michael Douglas, Susan Sarandon, Richard Branson, Whitney Houston, Donatella Versace and Morgan Freeman, among others. The TV events featured performances by stars like Stevie Wonder, Chaka Khan, Kelly Clarkson and Cher. Austrian real estate mogul Gunter Kerbler, whose investment portfolio includes real estate holdings and tech and media ventures, is a lead investor for the newly launched platform. MEET YOUR STAR operates an office in New York (temporarily closed due to COVID-19) and will open its US headquarters in Los Angeles in early 2021.

MEET YOUR STAR introduces a unique new concept: part of the proceeds generated by each video chat and video shoutout will be donated to a charitable organization chosen by the star. The star also decides which percentage of their fee they wish to donate (minimum 10%). Founder Georg Kindel: “This is part of the DNA of our new venture. We aim to inspire people and to facilitate concrete help for those who urgently need it.” At the time of its launch, MEET YOUR STAR had already partnered with some of the largest charities in Europe, including Caritas, Cancer Relief, Doctors Without Borders, Hilfswerk International, the Maltese Help Organization, Global 2000, Christoffel Mission for the Blind and the Jane Goodall Institute. MEET YOUR STAR is the official partner platform of LICHT INS DUNKEL (Light into the Dark), one of Europe’s largest charity campaigns, which collects roughly US$20 million every Christmas time to aid people with disabilities and families in need. For the first time, a telethon—which was held annually over the last 47 years as an important part of the charity’s fundraising activities—will be replaced partly by MEET YOUR STAR and its revolutionary concept of connecting stars and donors via a one-on-one video connection.