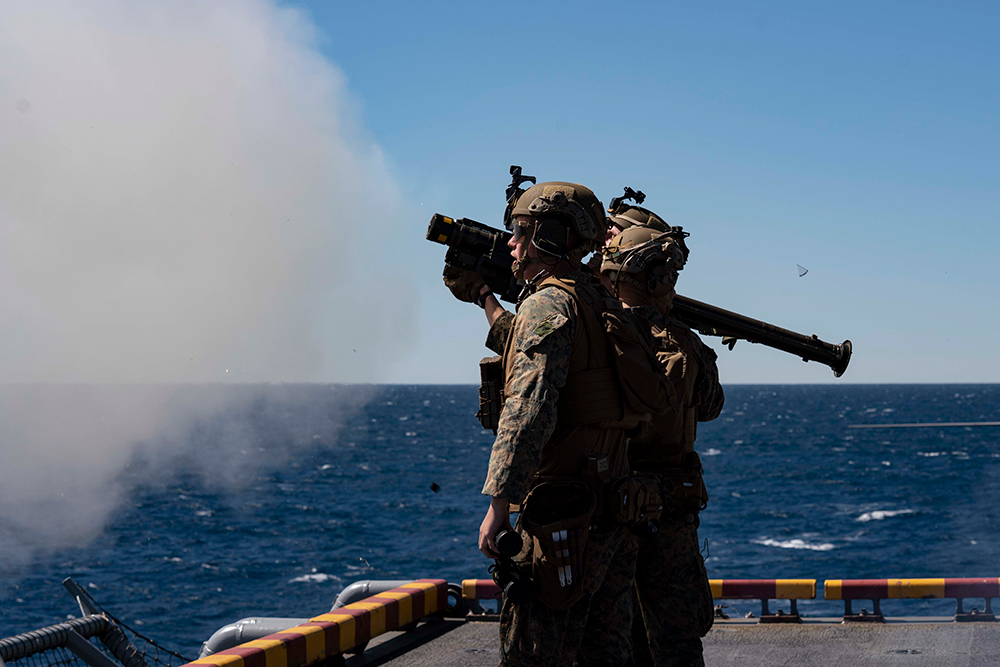 “Working with 110 Battery was a valuable experience that allowed us to learn from each other, which strengthened a bond that will undoubtedly be passed to future MRF-D deployments,” said 1st Lt. Alexander Bazanos, the platoon commander for the MRF-D LAAD detachment. “Working with our Australian air defense counterparts opened the door for creating TTPs for future MACG-38 and ADF integration.”

Air defense capabilities are a necessity for Marine Corps operations in the Indo-Pacific, and around the world. After several decades of competing in areas where friendly air superiority seemed nearly a guarantee, the operating environment changed. In this environment, air defense assets are critical and enable maneuver. Integrating allied air defense capabilities will further increase our ability to maintain freedom of maneuver.

“We will fight in defense of our allies and will operate in close alignment with them, from their territories, alongside their ships and aircraft, and in cooperative and even integrated formations on the ground,” provided Gen. David Berger, the Commandant of the Marine Corps, in his 2019 planning guidance. “Our forward deployed forces will continue to enhance the interoperability of our tactics, techniques, and procedures, while our capability developers enhance the interoperability of our systems.”

“Working with 110 Battery was a valuable experience that allowed us to learn from each other, which strengthened a bond that will undoubtedly be passed to future MRF-D deployments.” – 1st Lt. Alexander Bazanos, the platoon commander for the MRF-D LAAD detachment.

DIAMOND STORM 22 was an Australian-led Air Warfare Instructor Course that incorporated some of Australia’s top pilots and special operations forces. In addition to providing battlespace awareness with the MACG Detachment, MRF-D supported the exercise with MV-22 lift, transportation, and maneuver.

“The Air Warfare Centre and 88 Squadron, equivalent to our Marine Aviation Weapons and Tactics Squadron, put together a world class exercise that focuses on detailed integration of offensive air support, offensive counter air, suppression of enemy air defenses, fixed wing delivered close air support, assault support, and airborne command and control,” provided Capt. Zac Brown, a Weapons and Tactics Instructor and the Pilot Training Officer for the MRF-D Air Combat Element. “MRF-D ACE participation in this exercise allowed us to operate, force on force, against a thinking adversary with a comprehensive and modern integrated air defense system within a contested electromagnetic spectrum environment during the conduct of long range combat assault transport missions.”