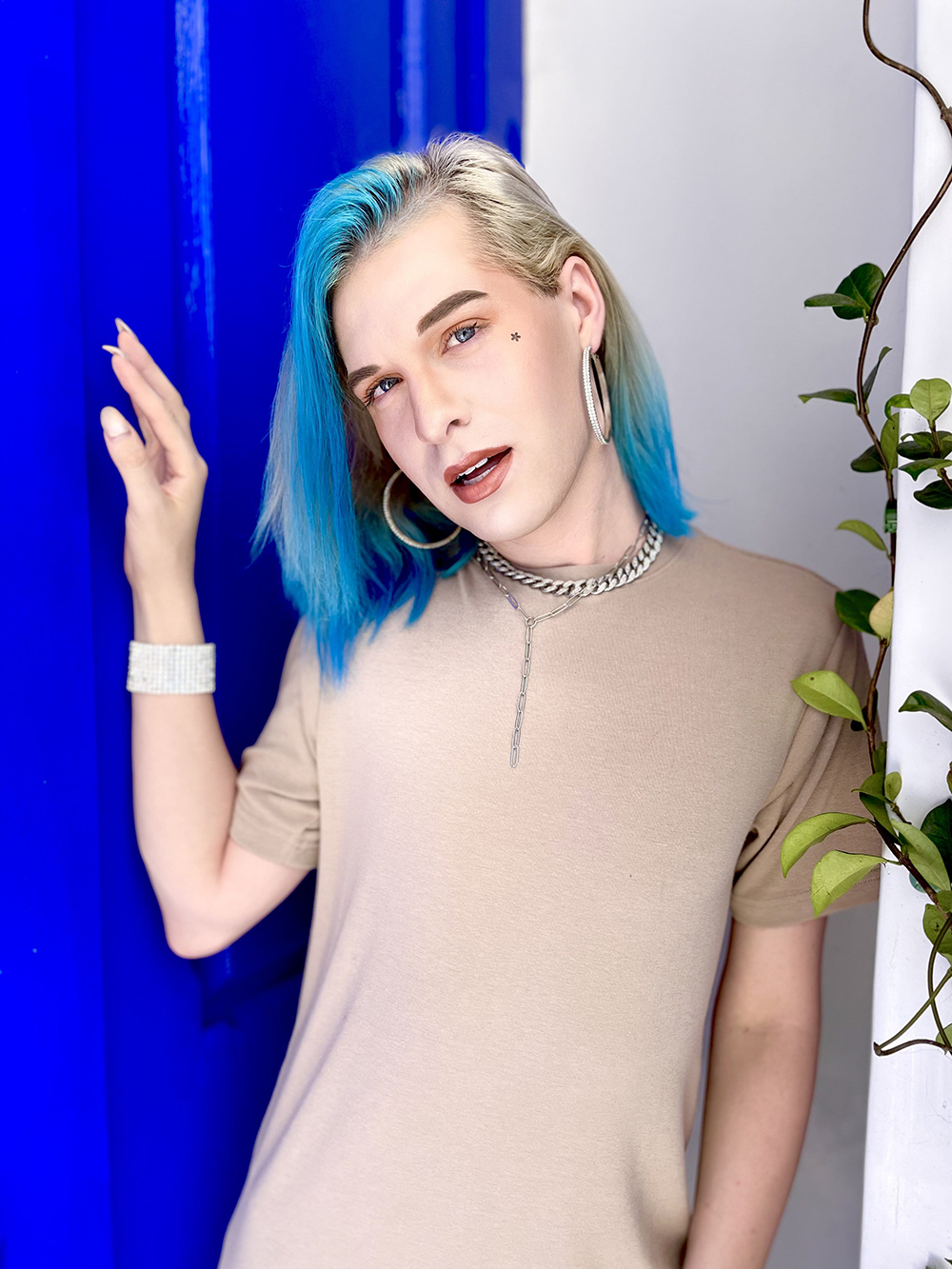 Mac Glitzy the non-binary Instagram influencer is gradually making key changes in the pop music and entertainment industry as we know it creating commercial pop representation for the transgender and non-binary community. Glitzy’s colorful pop aesthetic is in no doubt eye-catching and followed up by their catchy earworm songs like “Butterflies” is sure to have you humming along to the empowering hyper-pop mix.

There have been many non-binary artists finally being heard over the past several years such as Dorian Electra, Pablo Vitar, & Arca to name a few, and newly identifying mainstream recording artists such as Sam Smith & Demi Lovato. Mac Glitzy’s approach as a gender non-conforming individual navigating the music game is different in archetype that their music is transitioning from hardcore underground to vibrant pop, something the whole family can enjoy, whether you are 5, 15, or 50 years old there seems to be an alluring message and vibe to a Mac Glitzy track that you can do anything you believe in with a new outlook on life while navigating the common challenges we are faced with of mental health, adversity, failed relationships.

Could Mac Glitzy become a pop music head in the near future? Well with so many sub-genres and niche music choices springing up from platforms such as Soundcloud and TikTok over the latter half of the 2010’s I don’t see why not. We have seen a pattern of big music industry labels plucking aspiring artists to represent a more radio-ready top 40 pop version of these growing sub-genres. Such as Katy Perry for 2008’s reimagined Pop Punk, Post Malone for 2015 answer to Emo-Rap, or Travis Scott to rep Trap music fans for example. The pop music heavy hitter formula has changed in that we are seeing more tailor-made artists to represent each individual genre of music than an overall singular pop sound on today’s radio and billboard music spots. Glitzy is reportedly to be in the process of recording their first studio works in Burbank CA with Grammy-nominated producer/engineer Eric Emery so I am really interested to see where this will take Mac Glitzy as an artist to next in their career.

Glitzy’s music has begun to evolve since they first started uploading to the Soundcloud platform and Instagram with the Soundcloud Emo-trap collective group RefryWorldWide out of Sacramento CA in 2018/2019 with Soundcloud rappers and founders of the collective Emo Flytrap & Foreign Hype. The more polished and refined sound and look coming from the artist seems to be prevalent when they began working in 2021 with LA hip-hop production company No Face Films with creative director Ayesha Fernandez, Cinematographer Jose Quintanilla, photographer Ralph Mariano and releasing through Southern California music distributor Hollywood Gothic Productions.

Mac Glitzy’s larger than life glam pop music career is definitely one of the interests coming from humble beginnings known then as Mackenzie Allen Bucolla Roberts in the rural rust belt of West Virginia, growing up they were often subject to bullying by peers for being LGBT, androgynous in appearance, and Italian American where they attended Magnolia Highschool, WV Governors School of the Arts, & West Liberty University where they studied Musical Theatre. Glitzy moved to Los Angeles CA in 2016 to pursue their music career where they would live out of motels, their car, run-down apartments in east Hollywood while making ends meet doing modeling gigs, cleaning office buildings, working retail, and featured acting roles to earn money to pay rent and invest into their music career. They would soon earn the name Mac Glitzy from dressing up and attending Hollywood nightlife events. In 2019 Glitzy rose to popularity on the social media sites Instagram/Soundcloud with a dedicated queer and emo following.

Mac Glitzy is an artist and personality to keep on your music radar.