Front Page / People and Culture / Light and Legacy: The Art & Techniques of Edward S. Curtis, Is One of the Largest Curtis Exhibitions to Date

At the close of the 19th century, many Indigenous Peoples in the United States continued to adhere to traditional ways of life despite the tremendous pressures of modernity. Visionary Seattle photographer Edward Curtis saw the importance of honoring Native Americans on film. Over three decades, Curtis created thousands of images, audio recordings, and the earliest motion pictures of Native Peoples, all while making tremendous contributions to the art and science of photography. 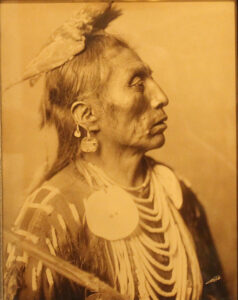 The exhibition opens to the public on October 19, 2021, and will run through late spring 2023. It is co-curated by Dr. Tricia Loscher, Assistant Director for Collections, Exhibitions and Research at SMoW and Tim Peterson, Scottsdale’s Museum of the West’s Trustee and Western art collector. “Based upon years of collecting Curtis’s artwork, Peterson has used his discerning eye in helping to curate this exhibition. On display will be photogravures; original copper plates; orotones; platinum prints; silver bromides; silver gelatins; cyanotypes; glass plate negatives; and recordings of Native music,” states Loscher. Peterson adds, “The exhibition lays out in two parts. The first will feature at least four portraits, one dwelling, and four to six cultural images from each of the first 20 volumes of The North American Indian. Curtis was a wizard in the darkroom; the second part showcases his skill. On display will be bottles of minerals used to develop his prints and a replica of his camera.”

Pulitzer Prize-winning Kiowa author N. Scott Momaday observed: “Taken as a whole, the work of Edward Curtis is a singular achievement. Never before have we seen the Indians of North America so close to the origins of their humanity, their sense of themselves in the world, their innate dignity and self-possession.”

Light and Legacy: The Art & Techniques of Edward S. Curtis is one of the largest Curtis exhibitions to date. Curtis’s endeavor consumed him; his life’s work nearly vanished into history. In the 1970s, in a Boston bookstore warehouse, his art came to light once more. “Today, Edward Curtis’s vision lives on. We are proud to have created this magnificent exhibition,” said Mike Fox, Director and CEO of SMoW. “We thank our curatorial team for their dedication, and our generous sponsors who made it possible.”