This special exhibit offers collectors an amazing opportunity to acquire some of the most important works of art that LeRoy Neiman would ever create. Celebrating the 100th year anniversary of his birth, which will be this June, this is the most complete retrospective of LeRoy Neiman – ever.

This all-encompassing exhibit features original works in a variety of media, sizes, and price ranges and showcases the full breadth of Neiman’s oeuvre. Although he pioneered the world of sports art his brush and pen went far beyond that. He captured moments in sports history like no artist had and created highly collected portraits of famous athletes, raising them to the level of other notable figures in his portraiture from world leaders to celebrities and musicians. Some of his most sought-after works, however, are from his African Safari collection including the animal portrait and resting animal series. Over 300 pieces are featured and available for sale to the public in this must-see collection. 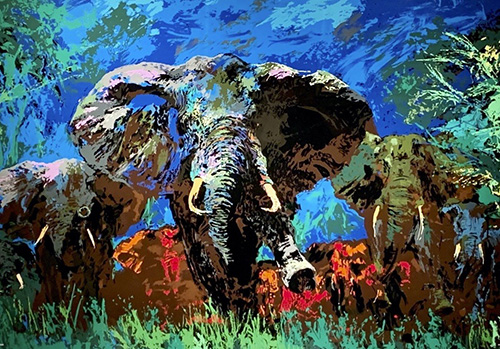 The most widely recognized American sports and leisure artist in history, LeRoy Neiman taught us to cherish and memorialize the beauty in a fleeting moment. Throughout his lifetime, Neiman was awarded a multitude of awards including the Lifetime Achievement award from the Muscular Dystrophy Association, the Award of Merit from the American Athletic Union; and the Gold Plate Award from the American Academy of Achievement. Neiman retired from his publisher in 2010, two years before passing away. American Fine Art was fortunate enough to purchase the remaining inventory from his publisher and has continued to be the ultimate destination for Neiman artworks.