Erich Rüthers: Katie, we know you are incredibly busy, so thank you for your time. Tell me about your career and your journey here to LA? It’s certainly been an incredible journey. Where did it all start?

Katie Horbury: Thank you, it certainly has. I was born in a tiny sleepy town called Pontefract in West Yorkshire, England. The town wasn’t exactly thriving, and the more I saw of the world on TV, the more I set my sights on living and working in London, Australia, and of course the United States. The music, movies, and TV industries were booming and a HUGE part of my culture. I was obsessed with teen TV shows like Saved by the Bell and California Dreams, and gutted when I got to high school and it was nothing like I had seen on TV, haha. The desire to work on TV in the U.S was instilled in me from this young age though, and there was never anything else I wanted to do.

I studied Media and TV production at university and was incredibly inspired and motivated by being in the TV making environment. Even working in our little mocked up studio floor and control room, as well as the old school recording studios and edit suites, I felt the buzz of what being part of creating real TV could be like, and I lived for it. I then got an opportunity to work on the auditions of X-Factor UK for a work experience placement. My job was literally to stand outside the door and allow the auditionees in one at a time. Not the most challenging task, haha, but just being in that environment and able to see all the producers, Simon Cowell and Sharon Osbourne (+ dogs) running around chasing stories was enough to know I wanted to be one of those producers. At that point, I thought I was well on my way to making it. Surely having one of the biggest shows on my resume before finishing university was enough to get me a real job right? WRONG! 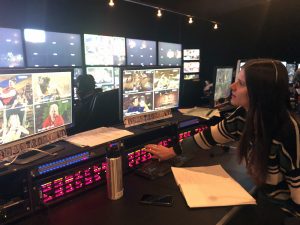 A year later, I was still living at my mum’s house hunting for a job in TV. Applying, grafting, begging, sending literally hundreds of emails and jumping at any chance I got to work on any kind of TV show possible. I trawled the internet and found all sorts of ways to get hold of contact details of the people who I wanted to work for. At the time I was working a part-time job in a petrol station, spending much of my days wondering if I am going to grow old and die working in this same petrol station. Please no!!! Then finally a friend put me forward for a job on a show she was working on at ITV – by far the biggest commercial network in the UK. Nothing was stopping me. The job was only 5 weeks long, but to rent a flat in London means committing to a 6-month minimum contract – to my mum’s horror, I took the chance and off I went. I never looked back.

London was mental. A crazy place that never ever ever stops. Exactly what I was looking for. I lived with friends who worked in TV, Advertising, PR, Music (yes it was a full house) and I just absolutely loved being surrounded by so many creatives. The most exciting event that ever happened in my home town was when the local news filmed at Pontefract castle and we were able to spot the back of my brothers head in the crowd. So having the bright lights of the hustling and bustling city on my doorstep was absolutely the place for me and I wanted to experience every single bit of life possible.

I spent the rest of my 20s casting and working as a location researcher and assistant producer on shows like Hell’s Kitchen, Come Dine With Me, The Only Way Is Essex, Don’t Tell the Bride and also traveled to Sydney to work on Masterchef Australia and children’s TV show Hi-5. Upon returning to the U.K I decided producing and not casting was where I wanted to be, and after a grueling 2 years, I got my first producer job on Big Brother and Celebrity Big Brother. Working on that show taught me everything I needed to know and to this day I am so thankful that the opportunity came my way. I was able to Produce in the control room, on the story team and the edit, which is a rare opportunity to learn so much from one show. I went on to produce many of the UK’s biggest reality TV shows including I’m a Celebrity Get Me Out of Here!, Celebs Go Dating, X-Factor, and Ex on the Beach, but I had always had LA in my sights and moved here at age 33. I worked on Paradise Hotel for Fox, Wrap Battle for Freeform and was halfway through the latest series of Masterchef when COVID-19 hit and the entire film and TV industry completely closed down. A very trying time for the whole world, especially those who have lost loved ones to such a terrible disease.

Q: It certainly is a trying time for everyone, how are things looking now careerwise?

A: Well I am definitely one of the lucky ones and very thankful for the position I am in at the moment. While my role on Masterchef had to be cut short and like most others, I haven’t been able to work since April, but I am looking forward to starting my next gig on Love Island this summer. Making a TV show like Love Island is going to look very different though, with so many safety precautions being taken extremely seriously, which I am obviously very happy about. It’s a very uncertain time for all industries at the moment, but I am sure that with all of the creative genius minds that we have in our industry, we will find a way to get the best out of the situation and come back from it stronger than ever!

Q: You must be looking forward to getting back to work? How was lockdown for you?

As a creative, I am used to working long hours and having a million and 1 things to do at once, and I have always loved that ‘life in the fast line’ vibe. So adapting to staying at home was far from easy. But absolutely necessary to save lives. I found the time to be beneficial in teaching myself to relax more, get enough sleep, exercise, and all of the benefits of those things a workaholic is usually deprived of. What I have loved though is seeing all of the creativity that has come out of this. From the hilarious TikTok videos to the memes and all the clever advertising campaigns, it’s lucky that we have social media as a platform to see all of this. It’s much less isolating than I imagine it would have been without all of the amazing technology that we have access to today.

Q: Apart from COVID-19, what were the challenges you’ve had to overcome? 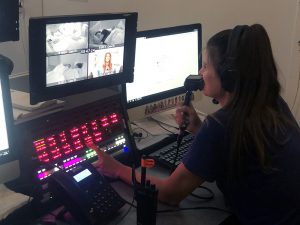 A: Ahh so many. It’s a fiercely competitive industry with as many cons as there are pros. The biggest challenge for me though has to be accepting that I can’t do it all. I have always had this feeling that I want to experience absolutely everything (well, apart from the negative stuff) that the world has to offer. So early in my career, I dreamt of being a producer, and editor, a director, a floor manager, an executive, haha – the list goes on. There comes a point where you just have to choose a path and go for it. I eventually chose to become a producer because I can be involved with as much of the production as possible and always learn new skills, but making that huge decision felt like closing doors, which has never been an easy task for me.

A: Oh my goodness so so many. I’ve worked with pretty much every A-list actor and actress at the BAFTA award ceremonies, which was obviously fun, but it’s seeing those golden moments of comedy broadcast on TV that I find the most rewarding. Working on the infamous ‘David’s Dead’ episode of ‘Celebrity Big Brother’ is certainly one of my best memories. Everything that happened that day made the episode so shocking, could only ever happen in the setup of Big Brother. It was like a comedy of errors that just kept on giving and giving. I am so proud to have been able to produce, and to be the voice of Big Brother, because I watched that show when I was in high school and desperately wanted to be part of the production, but at the time I didn’t really think getting into that world would be a possibility. I certainly never thought I would get there as quickly as I did. There is an absolute genius team behind that show, and belly laughing through the nostalgia of any ‘Best of Big Brother’ type show that is to air, is absolutely a career highlight for me.

Q: Any tips for anyone in your shoes in high school thinking the same as you did?

A: Absolutely. Firstly if you know in your gut that this is what you want to do, and you are willing to work your ass off to get there, then firstly I would say to never ever ever let anyone tell you that you won’t make it. You’ll probably hear a lot of comments like you don’t know enough people in TV, it’s too competitive, too challenging, too cliquey and all that jazz. Ignore it all. The road certainly won’t be easy, but the more you want it, the more motivated you will be by every little step closer that you get. You’ll find creative ways to get noticed, and the more it works the better it gets. Enjoy that journey, as you will meet so many like-minded people and make so many amazing friends along the way, that every part of the struggle will be totally 100% worth it. 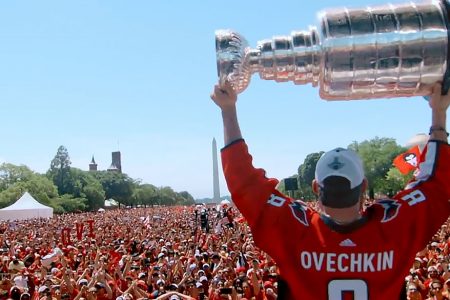 A Moment Of Feels 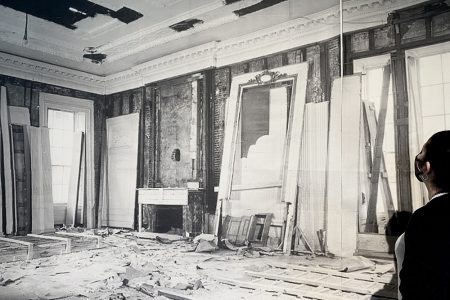 Artist Laura Insua and the Archeology of Power 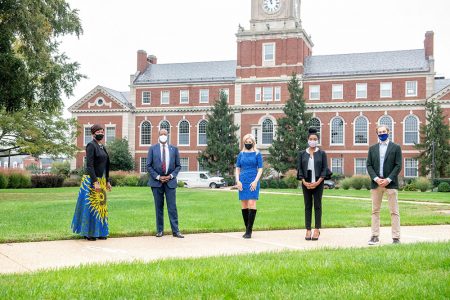 Howard University Receives $1 Million Gift From Heather and Jim Murren to Launch the Center for Women, Gender and Global Leadership