Yue Wang was born and raised in Chengdu, China before leaving to study and earn her first degree in Bulgaria, soon after she would discover her passions for filmmaking and moved to the United States and planted down in the star studded city of Hollywood where she began her career in entertainment as a Chinese female producer. Sounds like an adverse and hard road already, but somehow Yue makes it seem easy. So, we sat down with Yue in between her busy schedule to find out her thoughts and methods on success.

Erich Rüthers: First off, how long has it been since you moved to the United States?

Yue Wang: It’s been a little more than 3 years. Still only a short time. 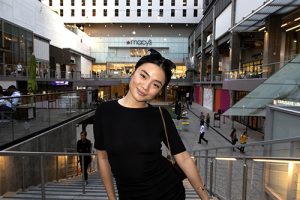 Q: You originally moved here from China, very different than LA, to chase after your dream. What does it feel like to finally be here at the Entertainment Capital of the World?

A: There is not much comparison really, growing up in my hometown I was a teenager who is, growing up under parents’ wings. Now I’m living in LA in my 20s working for my dream. Equally fantastic, in very different way. LA is the world center of cinema, center of entertainment. The city is diverse, full of opportunities and possibility, as an international female professional in entertainment, I just don’t know anywhere else that could possibly be better for me to further pursue my career. Ever since I was a little kid filmmaking has been fascinating to me. I loved watching TV even before I could really understand anything it’s showing. I didn’t quite understand or realize my enthusiasm towards it until later on. I love working in film, enjoy being part of this industry. Everyone around me is hard-working and inspiring, it is empowering and motivative being in such environment.

Q: Since you’re not from the United States, do you find yourself facing more challenges in LA?

A: Absolutely. But again, that’s a given. As an international working in entertainment in LA, struggles are obvious. Any international filmmaker would face the same issues when they are striving in a foreign country. I often ask myself – why would anyone choose to let me produce their projects, why would anyone choose to financially invest in my talents. Unlike a normal 9-5 job, building a career in entertainment requires not only professionalism, but also connections, connections that’s much harder to make as a foreign professional. It was quite hard for me to get a hold on things when I first moved out here, I didn’t really know a lot of people. Though I was extremely motivated and were ready for any challenge, the reality was I didn’t know where to put them in use. Blindly knocking on different doors (metaphorically and literally) could be frustrating sometimes. To be able to answer myself those questions, I work harder every day, I push harder on each project, I work smarter, and keep learning. It’s a never-ending cycle really, because even after you make it, you still need to keep growing. Myself, I need to tell people that I’m just as good as a local if not better, which can be hard. Not being a local in this industry in Hollywood is always a challenge for me, but it’s also the best motivation. As struggling as it was, the challenge was also expected, and luckily it has been dealt well with. 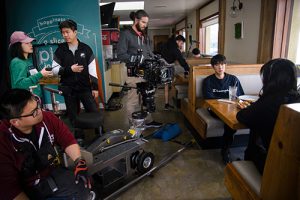 Q: How has your career and journey been since moving to LA?

A: My career path is exciting and satisfying to me. As a young and competent professional, I managed to quickly find my niche in the industry. I’ve done quite a few Chinese-American co-productions along the way. All of them are broadcast in China, and most of it can be found online internationally. My first-time production experience was in 2015 in Bulgaria. As a recent graduate I worked on the reality show “Master Chef” as a coordinator, then after I moved to LA in 2017, I worked with Jiang Liu, one of the best TV directors in China on the TV series, “The Way We Were” which stars two of the most popular actors in China, Yan Tang and Jin Luo. In late 2017 I was already producing my first feature, “Beneath the Banyan Tree” starring 3-time Golden Horse Award-winning actress, Ah-Lei Gua. Things only got better with bigger productions such as “The Rap of China ” in LA’s episodes where I produced season one and two, which featured guest judges, Migos and Kris Wu. In the summer of 2018, I was fortunate enough to work on a very important and moving film with Academy Award-winner, Helen Mirren at Universal. After producing the recent season of “The Rap of China”, I’m now going back to narrative storytelling, my last film, “Mother” has already gone on to win/nominated for over 20 awards worldwide and will be releasing very soon. Right now, I’m producing a new feature film”, which is a beautiful coming of age LGBTQ story set in California during the early 90s. I can’t express enough my excitement for this movie, I truly believe in it and looking forward to sharing it with the world.

Q: Many of your films focus on important and emotional topics such as family, disability, gender, tolerance, and understanding. Is drama always your go to genre?

A: All kinds of films actually. I love making comedies, it’s always so much fun on set with that energy! Really though, I love working on all kinds of films. The excitement and joy of completing the film, the process of bringing a story to life, the teamwork that ties everyone together; it all gives me goosebumps regardless of the genre. When I watch films, I guess I love thrillers, dramas, and comedies the most. I like watching films that either gets you to think about it for a long time after seeing it, or the ones that just give you a wonderful and enjoyable time, even though you may never think about it again. They are different, but equally good. I guess that’s how I also see it when working or picking a project. They are different, but all are great experiences and opportunities. 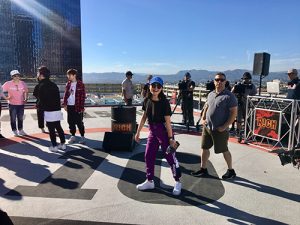 Production “The Rap of China”

Q: A big talk piece lately has been inclusion and diversity, do you think that’s helped your career?

A: Inclusion and diversity make a film, a FILM. I can’t express how important it is when it comes to filmmaking. As dramatic and theatrical as film is, film stories come from real life, from the real world, and real world is diverse with people no matter their age, gender, health, race, religion, or sexual preference. I’m all about equality for everyone. If you are the best choice for the role/position, then you should be yours. It’s a given to me. It’s sad how we have to keep announcing and keep raising awareness of something that should have been a norm. I loved “Three Billboards Outside Ebbing Missouri”, definitely one of the best films in the past 5 years. When Frances McDormand accepted her Academy Award for her role, she said the words INCLUSION RIDER. Since then Hollywood has made a little change a little push here and there. So, it does help, and it does make things better. Just look at the success of “Crazy Rich Asians” or “Black Panther”, and personally I loved “The Farewell” starring Awkwafina and directed by Lulu Wang, that’s another film that really needs to get the attention it deserves. All of this is inclusion. We’re seeing it grow and that’s a good thing, because it means good films by good people for everyone.

Q: Do you have any advice for other filmmakers, international or not?

A: If you truly love it – go for it, give whatever you have to follow your passion, chase your dream, there’s never a “fail” in pursuing dream, but only, “give up”. I won’t be gentle about it. If you have a second of doubt of whether you truly want it – forget about it. Filmmaking is the hardest, most exhausting and stressful thing I’ve done in my life. So much sweat and stress, so much struggle and uncertainty. The only thing that makes me want to do it again and again is my love for what I do; my passion for film. So, my advice – make sure your heart truly wants it and then go. Today almost anyone can make a movie, but it’s that passion, love and understanding of entertainment that makes you a filmmaker. It doesn’t matter where you are from.