The national median home price posted the second-largest annual increase on record in October, when it rose 14.2% year over year to $335,900, according to a new report from Redfin (www.redfin.com), the technology-powered real estate brokerage. These near-record gains are fueled by an extreme imbalance between homebuying demand and the supply of homes for sale. Home sales surged 24% from a year earlier—the largest gain on record—while new listings were up just 12%.

“October very well may have been the hottest the housing market gets this year,” said Redfin chief economist Daryl Fairweather. “Buyers who stepped away from the market at the beginning of the pandemic had been making up for lost time, which sent prices skyrocketing. But given that we are entering a winter wave of the pandemic, housing demand will likely lose a bit of steam until 2021, cooling the market from red-hot to just hot. If you are a seller, it’s probably a good idea to wait until the new year to list your home, but if you are a buyer, right now is a short window of opportunity where competition likely won’t be as intense as it was in October.”

“The market has definitely slowed in just the last couple of weeks, said Atlanta Redfin real estate agent Ronisha Carson. “Affordable homes are still seeing multiple offers, but more expensive listings are receiving less interest from buyers. Even though homebuying activity has slowed down, I have had three sellers reach out to me just this week to get on the market. Last year we saw a spike in demand in January and I think we will see that again in 2021.”

Median prices increased in all but one of the 85 largest metro areas Redfin tracks. The only metro area where prices fell from a year earlier was Honolulu (-0.8%). The largest price increases were in Bridgeport, CT (+39%), Memphis, TN (+30%) and Newark, NJ (+24%). 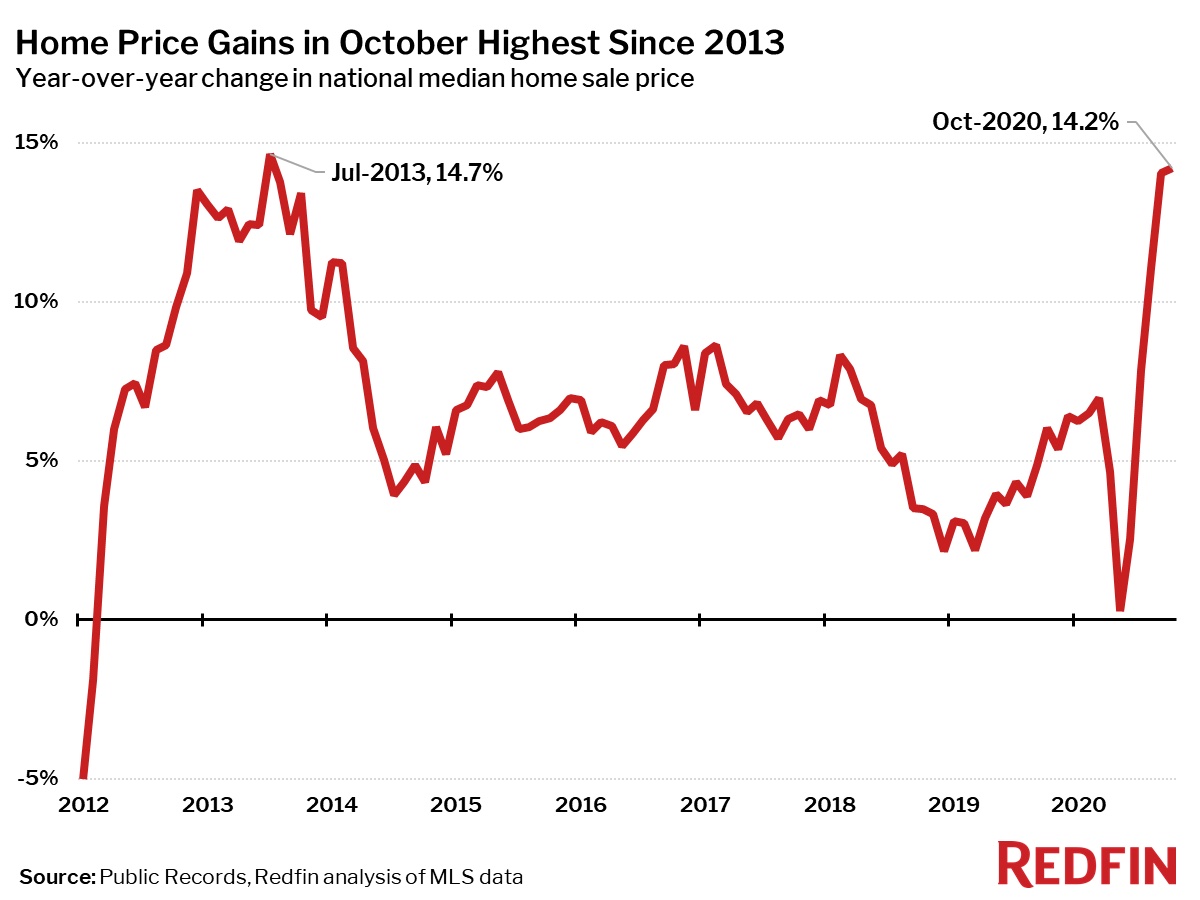 It’s likely that the big price gains in Bridgeport and Newark are due to the rush of people moving out of New York City in search of more space now that remote work has become more commonplace.

Home sales were up 24% in October from a year earlier on a seasonally-adjusted basis, the largest increase on record (this Redfin data series goes back through 2012). 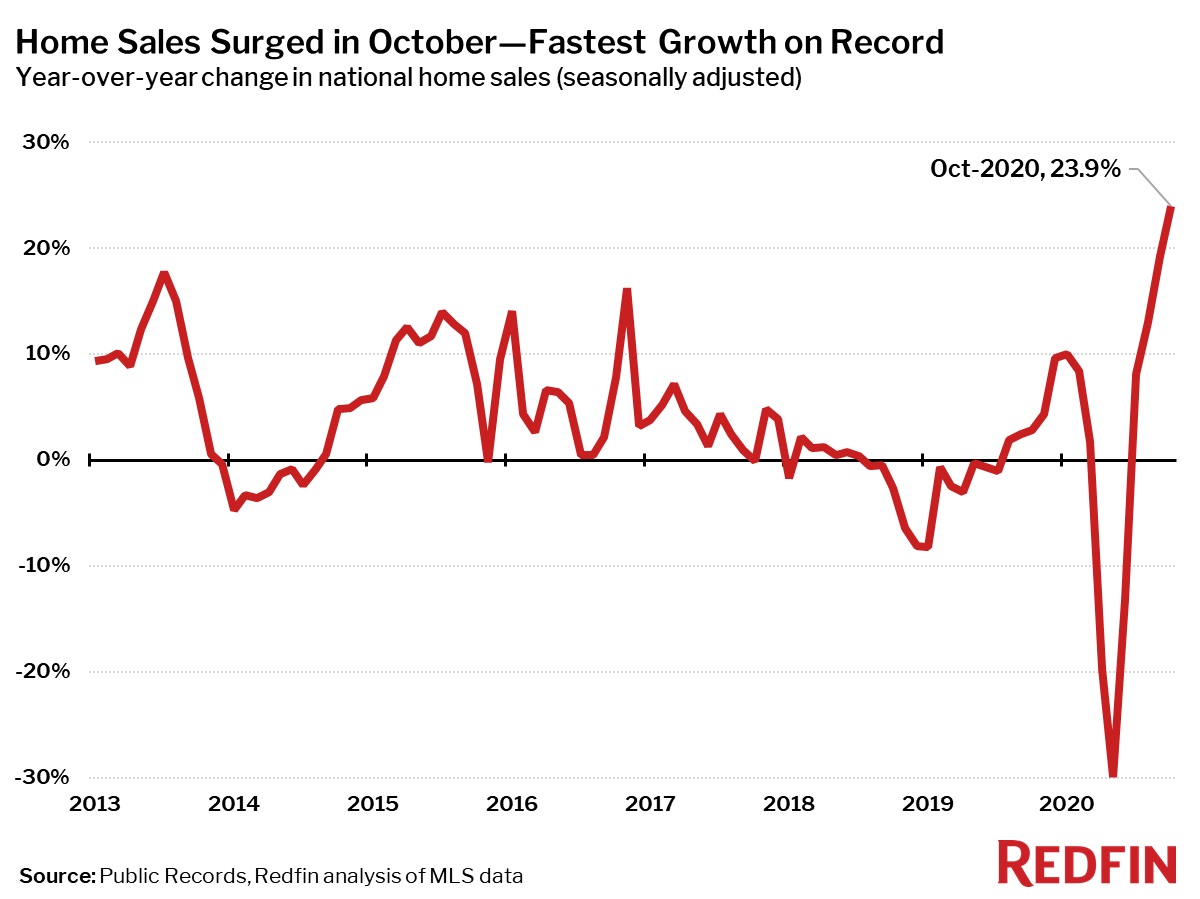 Active listings—the count of all homes that were for sale at any time during the month—fell 22% year over year to their lowest level on record in October, the 15th-straight month of declines. 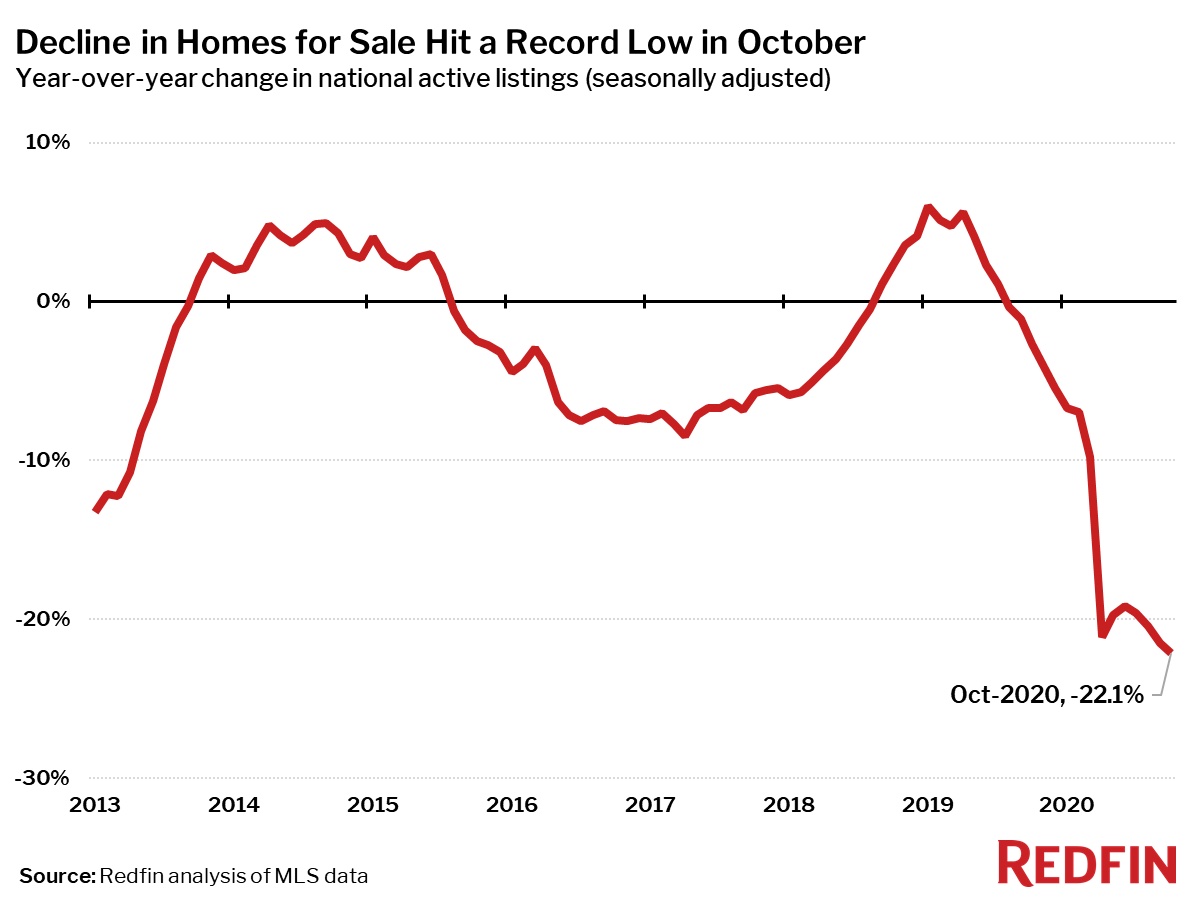 Only three of the 85 largest metros tracked by Redfin posted a year-over-year increase in the count of seasonally-adjusted active listings of homes for sale: San Francisco (+48%), New York City (+25%) and San Jose, CA (+4%). The number of homes for sale are building up in these markets thanks to big gains in new listings (all over 40% year over year) coupled with more mild increases in home sales. 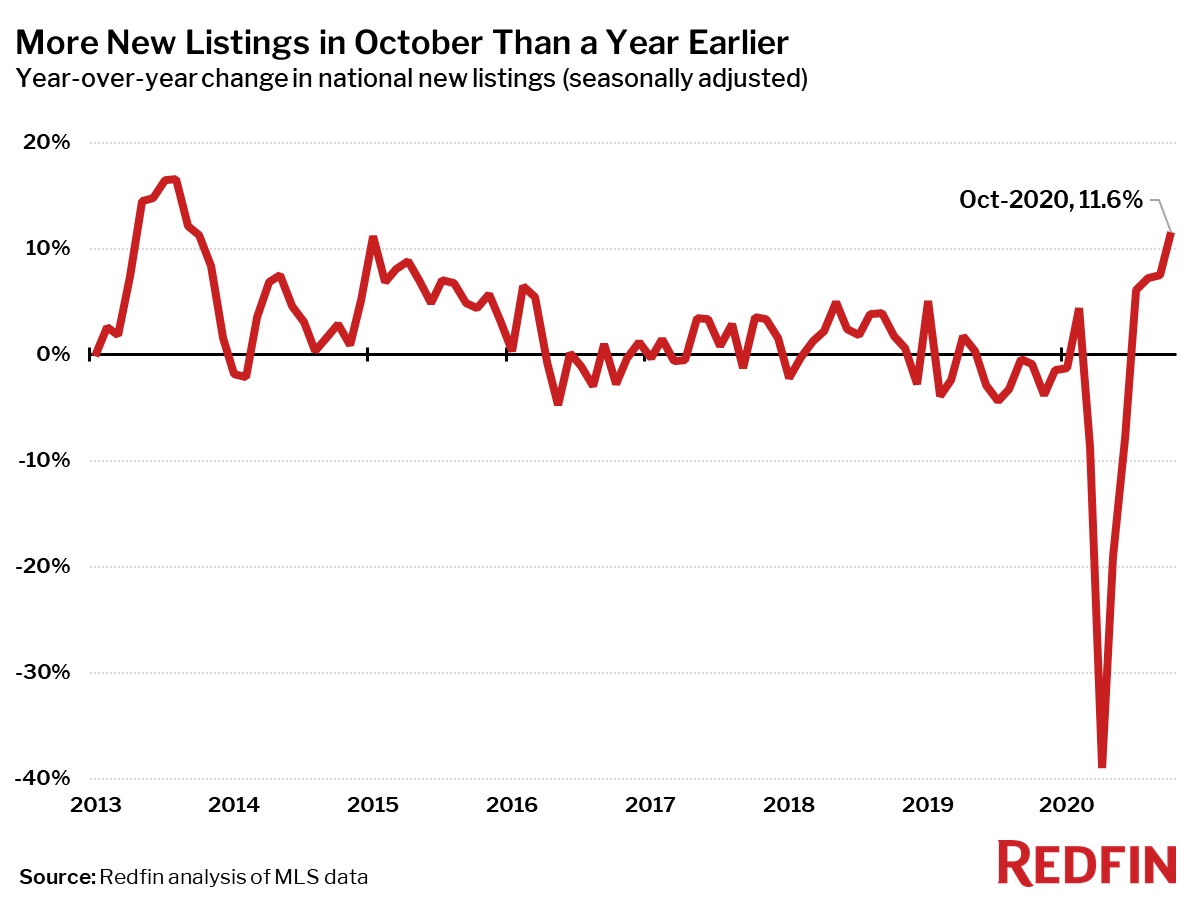 Measures of competition such as time on market and the share of homes sold above list price hit new records in October as they once again bucked the usual seasonal trend. This ongoing market dynamic is the result of a severe imbalance between the number of homebuyers and sellers in the market.

The typical home that sold in October went under contract in 28 days—16 days less than a year earlier, and a new all-time low. 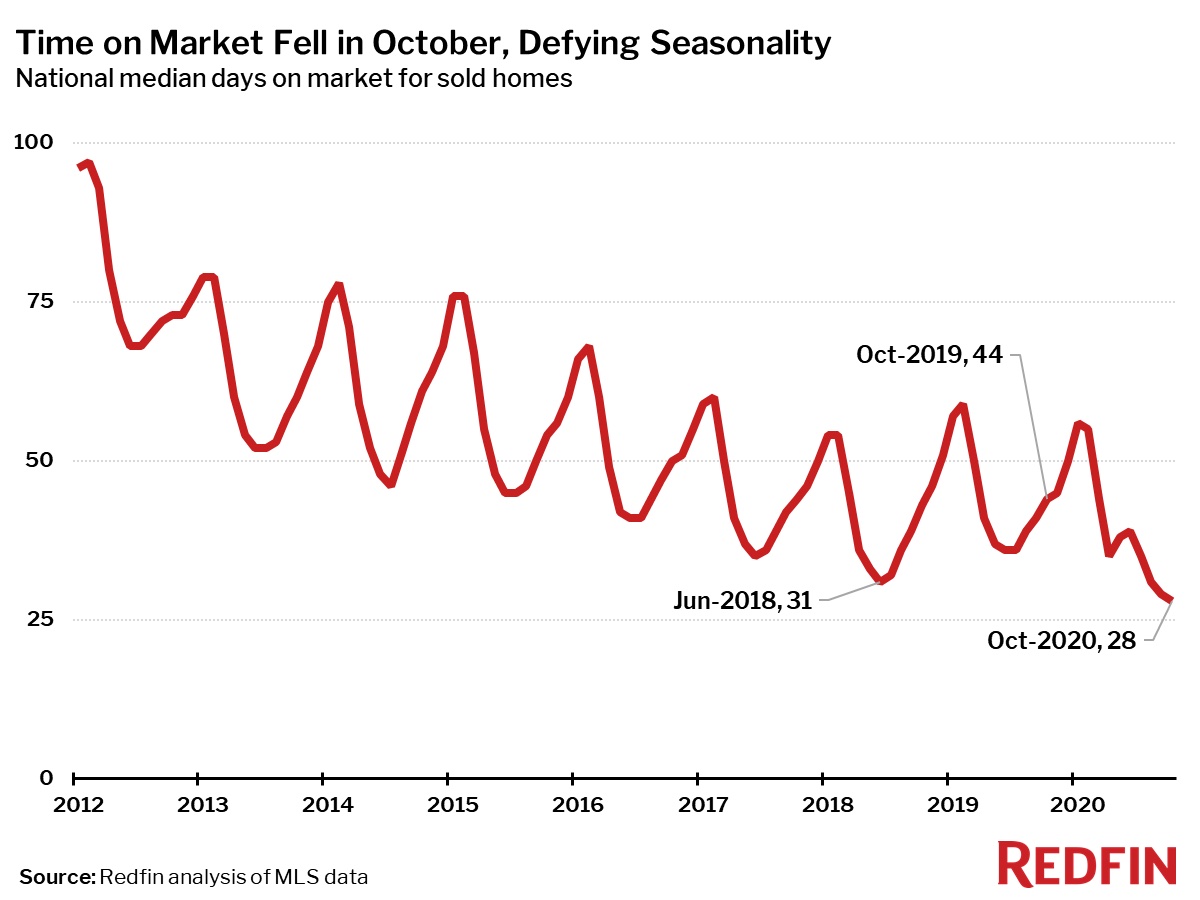 Typically by this time of year, the market is well into a seasonal pattern where homes spend more time on the market and the share of homes that sell above list price declines. This year, seasonality is out the window as the market stays hot despite the ongoing pandemic and recession.

In October 35% of homes sold above list price—the highest level in Redfin’s data, which goes back through 2012—up from 22% a year earlier. 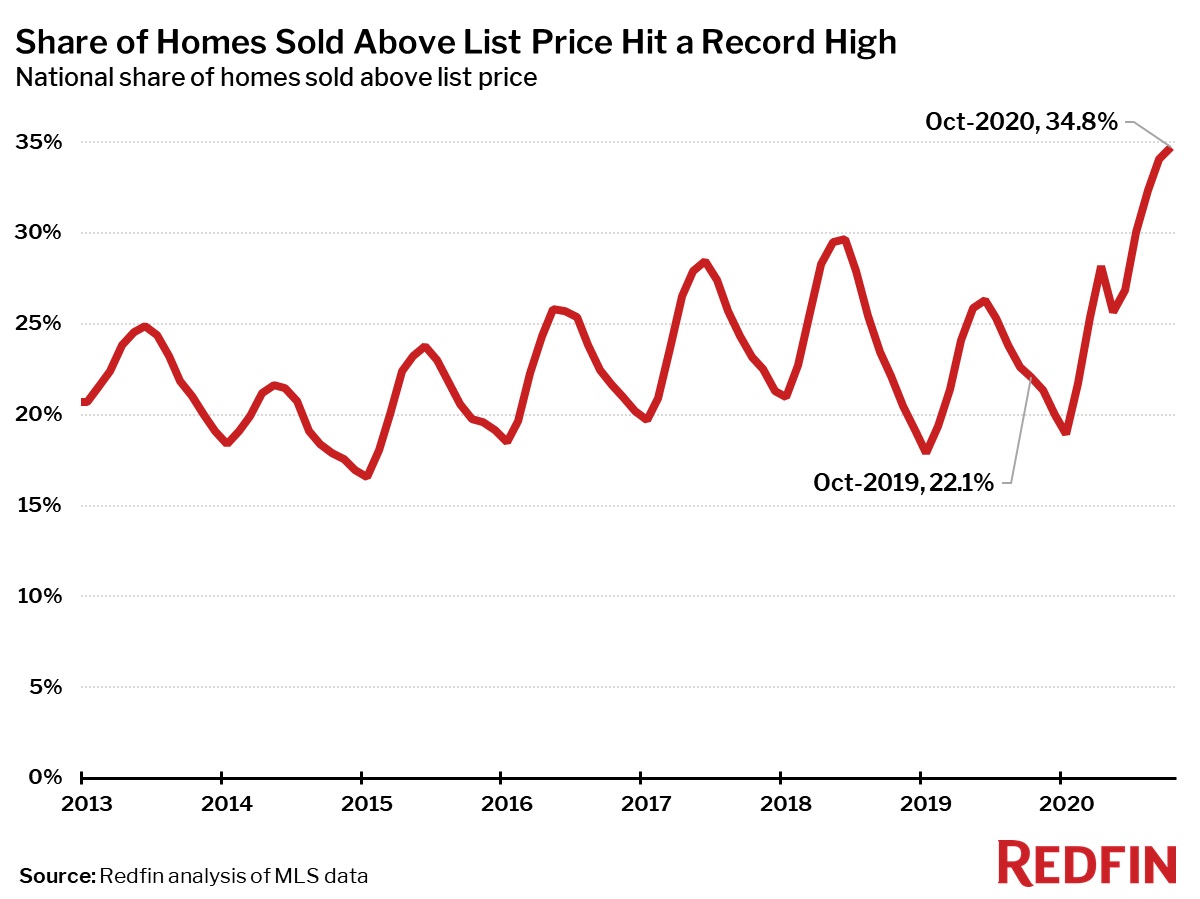 All Homes for Sale