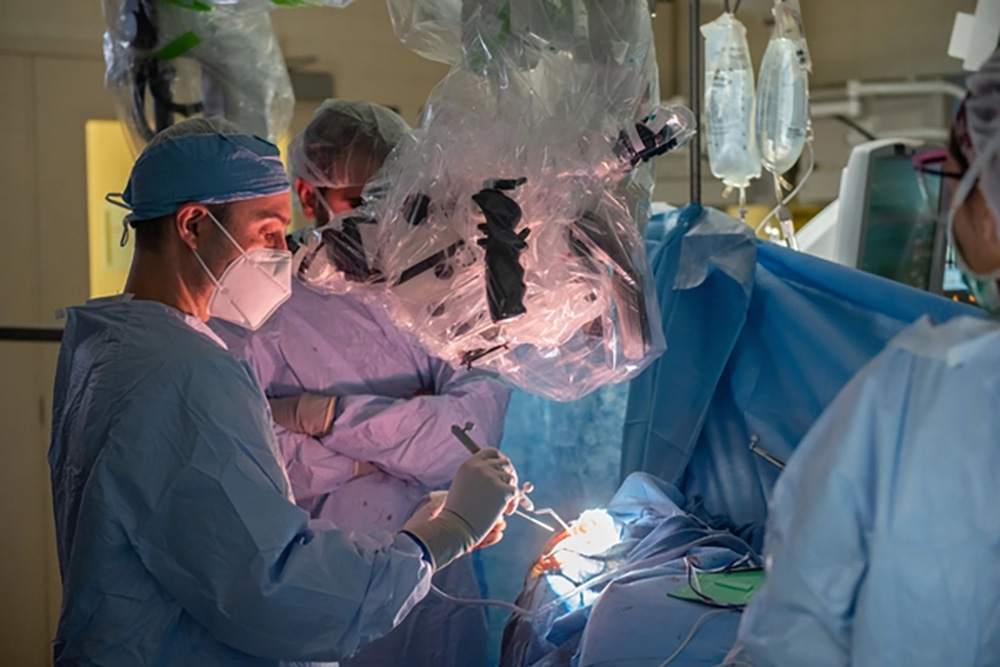 Surgeons at Henry Ford Health System have treated a patient with a recurrent brain tumor by delivering a dose of radiation directly to cancer inside the brain, a novel approach that could delay or prevent future tumor cells from regrowing.

It was the first case performed in Michigan using GammaTile® Therapy, which is a Surgically Targeted Radiation Therapy. The patient, Thomas Groves II, 41, is a resident of St. Clair, Michigan, who’s had three glioblastoma tumor recurrences since being diagnosed with brain cancer on Mother’s Day weekend in 2018.

“The current standard of care for brain tumors is tumor resection, often followed by radiation, chemotherapy or a combination of both,” said Adam Robin, M.D., a neurosurgeon at the Hermelin Brain Tumor Center, which is part of the health system. Dr. Robin performed the surgery on Nov. 19 at Henry Ford Hospital in Detroit.

“Approximately half of patients treated for brain tumors experience tumor recurrence within a year. In his most recent surgery, Mr. Groves was treated with a form of surgically targeted radiation therapy, which targets residual tumor cells with radiation before they can significantly replicate. Our hope is this therapy will delay or prevent the tumor cells from replicating and forming a recurrent tumor.”

According to Henry Ford radiation oncologist, Mira M. Shah, M.D., external beam radiation therapy is usually delivered no sooner than 2-3 weeks after surgery to allow healing of the surgical incision. In this new approach, the radiation is delivered directly inside the brain. GammaTile is a type of brachytherapy – internal radiation, which delivers a therapeutic dose to the tumor bed at the time of surgery. The dose delivered is such that radiation to the target is maximized and surrounding healthy tissue is unharmed. This method of treatment is a critical consideration in situations where patients have already received prior external beam radiation therapy, during which large areas of normal tissue have been exposed to radiation.

GammaTile Therapy features a bioresorbable, conformable, 3D-collagen tile and uniformly spaced radiation sources, which is placed directly at the site of the tumor cavity after the tumor is surgically removed. Ninety percent of the radiation dose is delivered in 33 days. After 100 days, the GammaTile radiation sources are considered completely free of radiation. On average, the placement of the therapeutic tile takes approximately 5 minutes.

Groves and his fiancé remain optimistic about his fight against glioblastoma and the hope this new therapy brings for his future.

“My word to everyone who has cancer is to never give up,” said Groves, father of his 16-year-old son, Kayden. “Never lose hope, never surrender your spirit and always stay positive. We are here in this situation together and anything is possible. We have to keep moving forward.”

To learn more about brain tumor treatment at Henry Ford, or to request an appointment with a Hermelin Brain Tumor Center expert, visit henryford.com/braintumor.