Nationwide, 49.7% of home offers written by Redfin agents faced bidding wars in December, according to a new report from Redfin, the technology-powered real estate brokerage. While that’s down from a revised rate of 55.9% in November, it represents the eighth straight month in which about half of Redfin offers encountered competition. An offer is considered part of a bidding war if a Redfin agent reported that it received at least one competing bid.

American homebuyers have faced fervent competition during the coronavirus pandemic, resulting from a jump in relocations made possible by remote work, a severe housing shortage and record-low interest rates. In the first week of 2021, the rate on 30-year fixed mortgages sank to 2.65%—the 17th all-time low in less than a year.

The housing market usually slows down significantly during the winter months as families take time off for the holidays and avoid the cold weather, but that wasn’t the case this year. Home prices increased 13.1% year over year in December, and home sales grew 16.2% on a seasonally adjusted basis.

“The housing market is unseasonably hot—it’s behaving like it normally does in the spring, with plenty of demand from homebuyers,” Redfin chief economist Daryl Fairweather said. “Typically, the vast majority of homes for sale in December are homes that have been sitting on the market because they’re overpriced or there’s a problem with the property. This December, with so many Americans moving, scores of desirable homes hit the market—but not enough to satisfy insatiable demand from homebuyers. The result? Fierce bidding wars.” 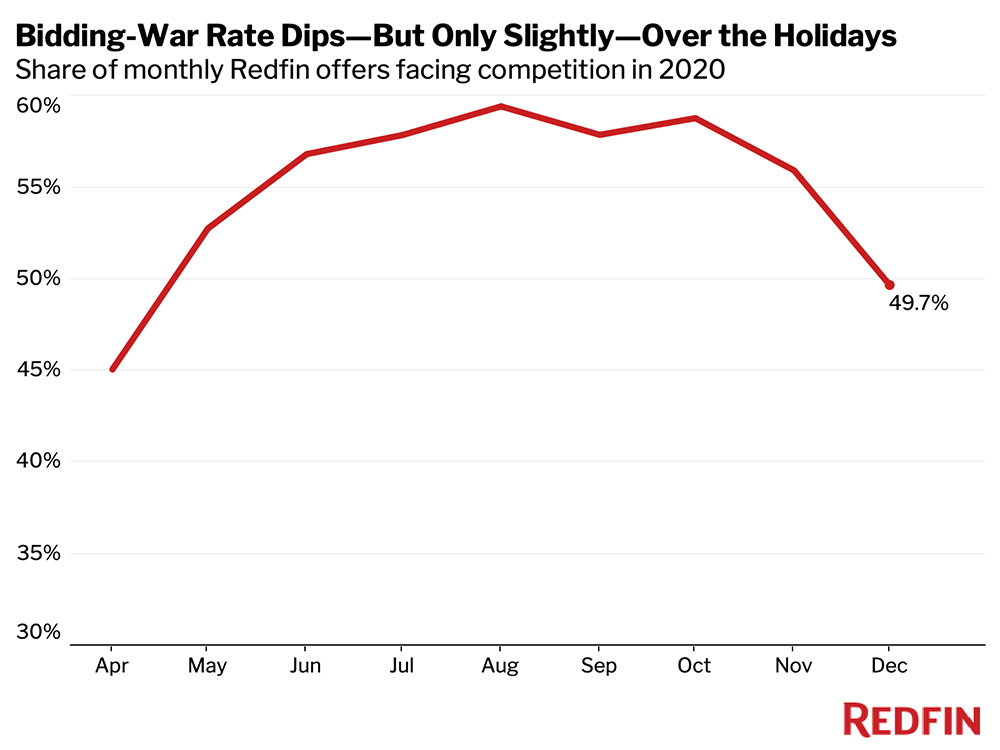 Salt Lake City and San Diego Were the Most Competitive Markets

“In Salt Lake City, every property gets into a bidding war unless it’s really overpriced,” said Ryan Aycock, Redfin Salt Lake City’s market manager Ryan Aycockin Salt Lake City. “One of our agents just helped a buyer put in a bid for a $329,000 four-bedroom home in Taylorsville that received 19 other offers. To win, you have to offer 5% to 10% over the asking price and waive all of your contingencies. Buyers are very frustrated. They’re competing with out-of-state money. We had a client from Palo Alto who bought a 4,500-square-foot home on a half acre for $600,000, and his mortgage payment was less than what he’d been paying in rent for his tiny California condo.”

An acute shortage of homes for sale, along with booming demand, is fueling Salt Lake City‘s intensely competitive market. Home supply in the metro was down 56.8% year over year in December, while home sales were up 14.6%. The lack of homes for sale is partially due to an especially severe shortage of new listings, which were down 44.3% year over year in Salt Lake City last month. That compares with a 13.6% gain nationwide.

Million-Dollar Homes Were the Most Likely to Attract Bidding Wars

“Luxury homes in Utah are getting into bidding wars more frequently than they were before the pandemic,” Aycock said. “This is partially because folks are moving here from expensive cities and bringing their salaries with them, and partially because there are a lot of move-up buyers taking advantage of low mortgage rates and purchasing larger homes. Plus, a lot of people have actually saved money during the pandemic.”

Competition for high-end homes is on the rise in part because so many affluent Americans have been relocating during the pandemic. Sales of luxury homes surged 61% in the fall, far outpacing the 7% increase in sales of affordable homes, a recent Redfin analysis found. Similarly, demand for second homes has skyrocketed 100%—further evidence of the country’s “K-shaped” economic recovery.

Single-family homes were the most likely property type to attract bidding wars in December, with 53.6% of Redfin offers encountering competition. That compares with a bidding-war rate of 46.1% for townhouses and 33.9% for condos.

The single-family home has been the hottest property type during the pandemic because it typically offers more space and privacy—essential features for many families that are working from home and engaging in remote learning. With shared amenities and close quarters, condos haven’t fared as well.