Although Makaley Montano ’24 has lived in Redlands all her life, studying local history has opened up a new world. “I never learned about the Black history here—I never even knew it existed,” says Montano, who is currently enrolled in a course called Black History of the Inland Empire as part of her studies at the University of Redlands.

Montano is one of 20 students in the course interviewing dozens of local Black elders and recording valuable oral histories to better understand the region’s evolution. “We learn about Black history and help bring it to life through newspapers, census records, podcasts, maps, and watching and conducting oral histories,” she says.

Jennifer Tilton, professor of race and ethnic studies, teaches the Black History of the Inland Empire course. “Students tell me when they grow up in Redlands, in school they learn about white orange grove owners,” she says. “They don’t learn about the Black or Mexican families who have been in Redlands since its founding and helped build the city. The only Black history students learn is a really simple story of slavery and Martin Luther King Jr. in the South, but they don’t learn anything about the vibrant Black communities that existed right here.” 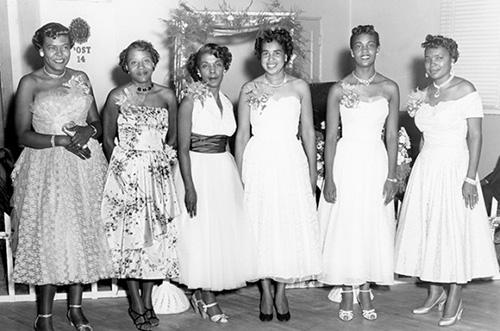 The ambitious oral history initiative is being relaunched through a partnership between Tilton and the Cal State San Bernardino (CSUSB) John M. Pfau Library, with additional funding and support from the University of California Riverside Public History Program. The library manages the “Bridges That Carried Us Over: Archiving Black History” project, an archive established in 2007 by the Honorable Wilmer Amina Carter, who represented California’s 62nd Assembly District from 2006 to 2012, and her late husband, William Henry “Ratibu” Jacocks.

Tilton and her students are working to reinvigorate the archive project along with support from several civic and religious organizations including Congregations Organizing for Prophetic Engagement, NextGen United, Black Voice News, UC Riverside Public History program, and Second Baptist Church. Students are working with these community partners to conduct new interviews to help tell the full range of diverse stories of Black communities in the 20th century. They are also helping to transcribe some of the 50 interviews conducted by Carter and Jacocks with community leaders. Completed interviews are available to the public at CSUSB Scholarworks.

“Our long-term goal is to use the oral histories and other community archives to change the ways we teach history in K-12 schools throughout the Inland Empire,” says Tilton. “We are already talking with other teachers, historians, community leaders, and students about how we can create digital stories, StoryMaps, and curriculum that could be used in ethnic studies or history classes.”

Wisdom to help understand the world we live in

Because of the pandemic, Tilton’s class conducts oral history interviews virtually over Zoom. With the aid of younger, technologically savvy relatives, community elders can tell their stories safely. “They have so much knowledge, and they are stuck at home in isolation,” says Tilton. “This is a wonderful opportunity to get young people to talk to elders, learn from them, and get some of the wisdom that helps us understand the world we live in. They lived through a lot of changes.”

As the project continues indefinitely with future Redlands students delving into local Black history, Tilton knows the wealth of accounts about times gone by enriches contemporary society. “If we can figure out how to tell the full and diverse stories of all the people who built the cities we live in right here in the Inland Empire,” she says, “then I think we can figure out how to build fully diverse and inclusive communities today.”

Denise Spencer ’12, ’14 (MAM) coordinates training for the oral history project and conducts interviews alongside the students. “When you’re African American in this country, it’s a life struggle to feel a sense of belonging and connection,” she says. “These are the kinds of projects that tie us to the land and to America. This project will create an archive of the Inland Empire’s living history so we can hear the voices of the people for generations to come.”

“We belong; we are everywhere; and we contributed to this country. It’s important for all citizens to be aware of this history that has been silenced for so long.”

Learn more about studying Race and Ethnic Studies or History at the University of Redlands.