Along with the technological development present in all the aspects of our life, we keep increasing the number of elements we move to the Internet. Popular in the past, television or radio ads have been substituted by colorful banners on our favorite websites. From early childhood, we learn how to use devices such as telephones or computers, and as a result, a lot of our passions are born precisely there. GlobalWebIndex base has shown in one of its reports that from the group of study participants consisting of active internet users aged between 16 and 64 years old, 86% of them play games on at least one device. This results in the quickly growing popularity phenomenon of gaming, which has created an entirely new field – e-sport.

E-sport is a relatively new term, and a lot of people have no idea what it actually means or what does it entail, resulting in a lack of awareness regarding its scale. Games are not only funny animations on the screens of our smartphones. They are gameplays full of rivalry that need days, months, and years of preparations. They generate stadiums full of fans, live transmissions with hundreds of thousands, or even millions of spectators from all around the world.

Even though Asian countries can take advantage of the enormous advertising potential extracted from it, the other parts of the world are falling behind in that area. Statista website has published data showing how much the investments in this industry will grow in the upcoming years. 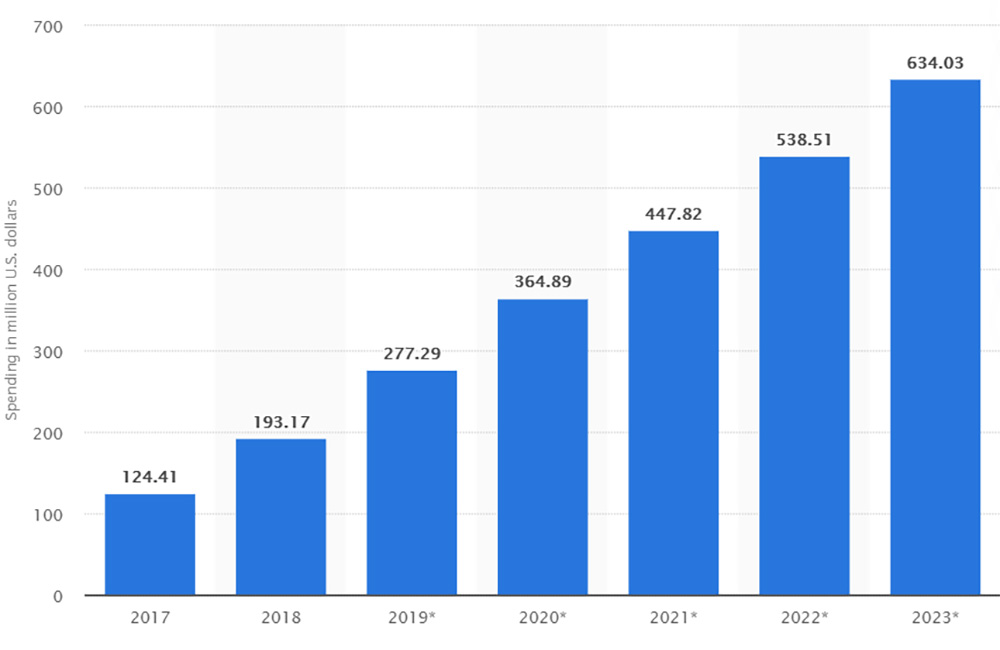 Sponsorship and advertising spending on eSports worldwide from 2017 to 2023. © Statista

To better picture the scale of events we are talking about, it’s worth recalling the League of Legends World Championship. The tournaments include gameplays between the best squads from the whole world and are taking place in various countries. In 2020, the finals were transmitted by over 21 different platforms in 16 languages, aggregating approximately (according to Riot Games data) 23.4 million spectators per minute (in 2019, the number was 21.8). In the peak moment, there were 44 million users simultaneously attending the event online. In total, the 5-weeks event (including all of the activities organized in between gameplays) was streamed for over a billion hours.

Games field in 2020
Facebook has recently published a report regarding marketing statistics in the games field in 2021. It was shown how the current pandemic had influenced the growth of interest in gaming, which led to record-breaking results of viewership on streaming platforms. One critical data revealed that most active players do not have anything against viewing ads during gameplay, which offers a new possibility for advertising products. They also declare that they play more often and dedicate more time to it. They want to be a part of a community, which has resulted in the creation of over 185.000 themed groups on Facebook in a period as short as eight months. From July to September 2020, the total number of streamed hours on Twitch.tv alone amounted to 4.7 billion (the previous year, it was 2.8 billion). The Streamlabs & Stream Hatchet report regarding the live streaming business in the III quarter of 2020 has concluded that the live streaming field has increased by 91,8% on the yearly scale. The statistics are very promising and prove that the fields of gaming and e-sport in their completeness can be one of the leading advertising areas among young people. 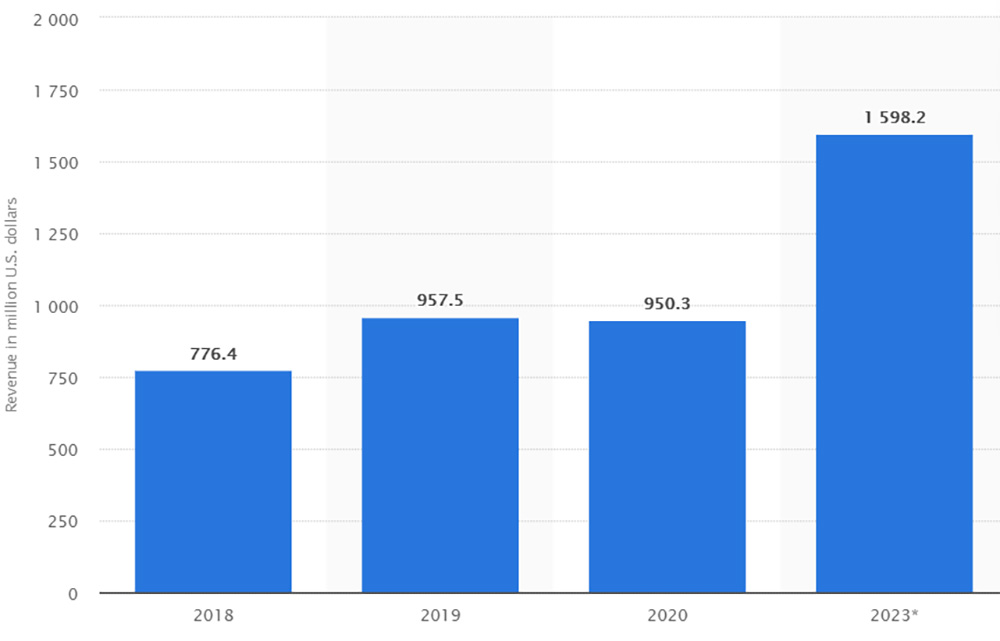 Why is investing in e-sport worth it?
When investing in e-sport, we manage to get to a particular sector of audience. That said, if our potential client fits into these demographics, we should consider entering that field. There, you don’t have to target the ads or spend time choosing the best among hundreds of industry-related websites. The ad will be drifting on its own and arriving exactly where the potential buyers reside. Electronic sport has its own “house” on the web, where most current digital marketing is present. It is there that the audiences share their remarks about teams, players, tournaments, or… sponsors. You need to know that e-sport, as a whole, is very extensive. We are talking about countless tournaments, live transmissions online, offline events, hundreds or thousands of articles, blog posts, or comments on various social media platforms. The ad arrives at all of the places that gather people interested in the topic. Sometimes even without our participation. It’s also worth taking a look at the numbers – the audience keeps increasing year by year. 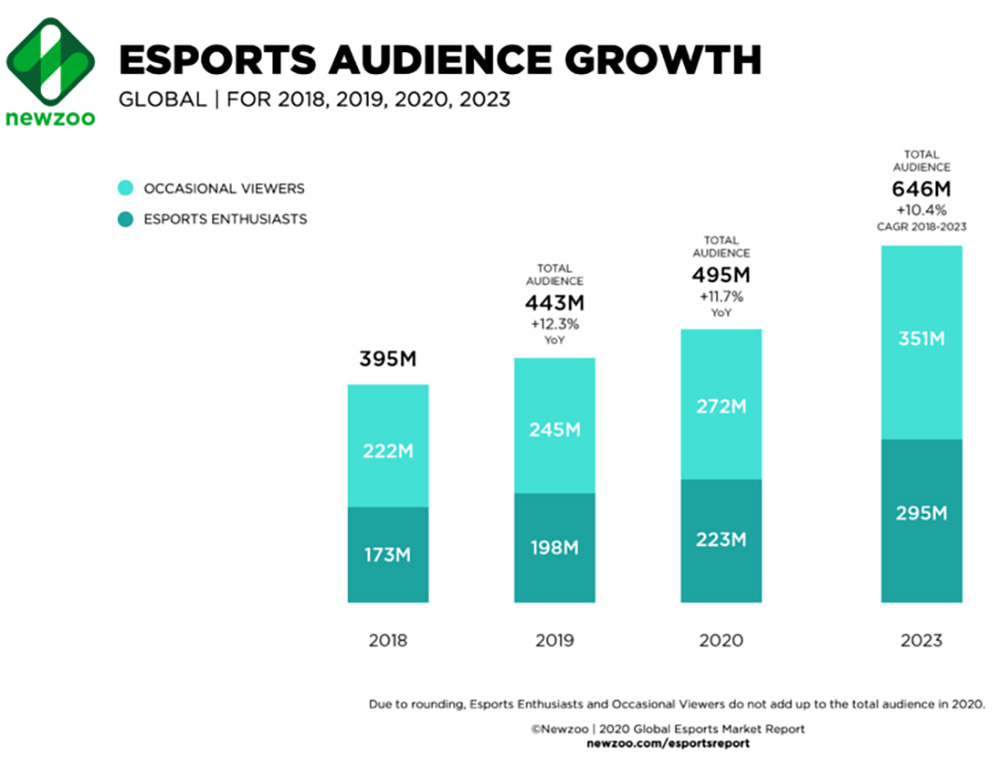 How to invest in e-sport?
Some of the brands have already understood how much they can gain from investing in e-sport. That includes giants like Coca-Cola, Gilette, Mercedes-Benz, BMW, or Red Bull. They are not trying to flood all of the channels with ads but rather become an inseparable element of the whole enterprise. This way, they most importantly are gaining two things – the trust and attachment to the brand, because they are directly supporting events necessary for the fans and recognizability. In 2019, even the luxury brand of Louis Vuitton, which at first glance doesn’t fit the ideal audience demographics of the brand, has joined the e-sport marketing field. In collaboration with Riot Games, they have created unique sets of accessories in the game and designed the winning trophy case. The study performed by Esports Group has shown that positive reactions regarding ads accompanying gaming initiatives (non-endemic enterprises) are reaching 79% (Fnatic organization). How to enter that world then? 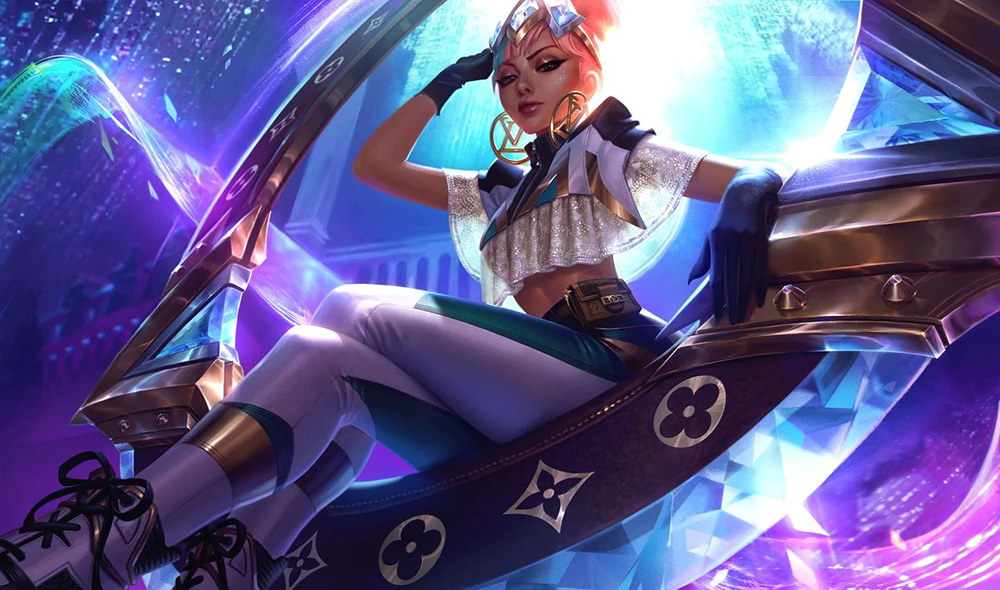 1. Organizing or sponsoring tournaments
One thing is sure – tournaments will constantly be raising interest. That includes both the local, national, and international ones. In their case, investing a tremendous amount of money is not always necessary. You can also collaborate with chosen gaming houses or gaming pubs. The possibilities are endless and depend only on the budget and will. If you prefer leaving everything to the professionals, consider co-sponsoring a more significant event. This way, all of the event planning responsibility will be laying on the organizer.

2. Sponsoring an e-sport team
Building one’s team or taking one under your brand’s patronization can lead to incredible results. It will let you get a prime ad on social media channels of all of the team players and streaming platforms. If you manage to build a strong team that will be even minimally successful, your brand will start appearing in massive transmissions and industry-related websites organically.

3. Influencer marketing
Collaborations with people from the gaming world who already have their trusted audience are great solutions when getting to a more specific group of recipients. The critical element at that moment will be defining our expectations and deciding who do we want to show our products or services to. By choosing a streamer, we are gaining an ad on platforms like (most importantly) Twitch, Youtube, and Facebook Gaming. Just like when supporting a team or organizing a tournament, thanks to these channels, we have the possibility of direct communication with our potential clients. The online chat presented in real-time makes it possible for the audience to lead a conversation with the creator/organizer. It gives the audience the feeling of belonging and of being part of something greater. All of this results in an attachment to our brand. In 2017, Nielsen published a report in which he stated that 64% of US citizens over 13 are actively playing. The Entertainment Software Association has shown that 49% of them spend a minimum of 3 hours weekly. With every year, the number of players is increasing, leading to the target group’s constant growth.

How to begin?
First of all, you need to understand the e-sport community and know that it is significantly different from what you are used to while creating Facebook or Instagram content. Only then will you be able to plan a marketing strategy for that advertising area indeed. This field is playing by its own rules. Something that usually you wouldn’t allow for while creating a typical campaign might result in a huge success – or vice versa. There is no place for corny advertising slogans here. Carefully define your target audience and check which area of e-sport might bring you the best long-term benefits. Analyze the available platforms. Which social media channels do they use? It could seem that everything that is connected to games will be the domain of the youngest audience. However, the studies of the Entertainment Software Association have proved that the under 18 years old age group only constitutes 21% of the players. The biggest age group, over 40%, consists of players aged 18-35. What’s more surprising is that those same studies have concluded that the number of women who eagerly enter that world increases year by year, and they now constitute 46% of all the players. These dynamic changes show that the market keeps changing and the audience, which we can gain access to.

The ideal situation would arise if you were the player yourself. It would show you the vast area of maneuver in planning the content of the ads. Being a part of the e-sporting world, you would understand better its components and the ways of getting into it. Brands like MasterCard are already taking advantage of it, creatively matching elements of their campaigns with the League of Legends tournaments sponsored by them.

Where else to promote your brand
As I mentioned before, we can easily find people connected with e-sport on different streaming platforms. However, that’s not all. The most popular social media channel for that field is Twitter. Almost every person, brand, or team connected with the gaming world has an account there. It allows them for direct communication with people interested in their activities.

Most importantly, one that wouldn’t be possible on other platforms. While browsing websites of the popular e-sport teams, it’s possible to notice that their content is significantly different from what we are used to. The most crucial part will be the so-called “flow” to match the reigning trends ideally.

E-sport is constantly changing. New tournaments, games, players, teams, and influencers are regularly making their debut appearances. Everything is dynamic. You need to therefore be up to date with all of the results of your campaign. Perhaps the area you invested in might not bring the desired results, and it’s worth considering an edit of your strategy.

Regardless of the e-sport or gaming area, you choose to invest in, you can genuinely obtain endless benefits. Access to a vast, young, and very engaged audience group will allow your firm to gain recognizability in an entirely new field. Choosing a rapidly growing technology industry, you have the guarantee that you will constantly be up to date. Remember, then, that these terms entail more than just careless moments spent behind a screen. E-sport is people. E-sport is the future.