Paula Williams Madison, an American of Jamaican origin, is a former vice president at General Electric, a former senior vice president at NBC and has spent more than 20 years at NBC Universal in various roles in the United States. Yet, the identity she is most proud of is the quarter of her background that reaches back to Crane Lake Hakka Village in China. Recently, she and her cousin Kim Yuet Lau appeared on Listen To Me, a language program broadcast on China Central Television’s CCTV-4 that features people of Chinese descent from all over the world. The program’s guests share the details of their journey across borders, races and cultures to discover their roots. 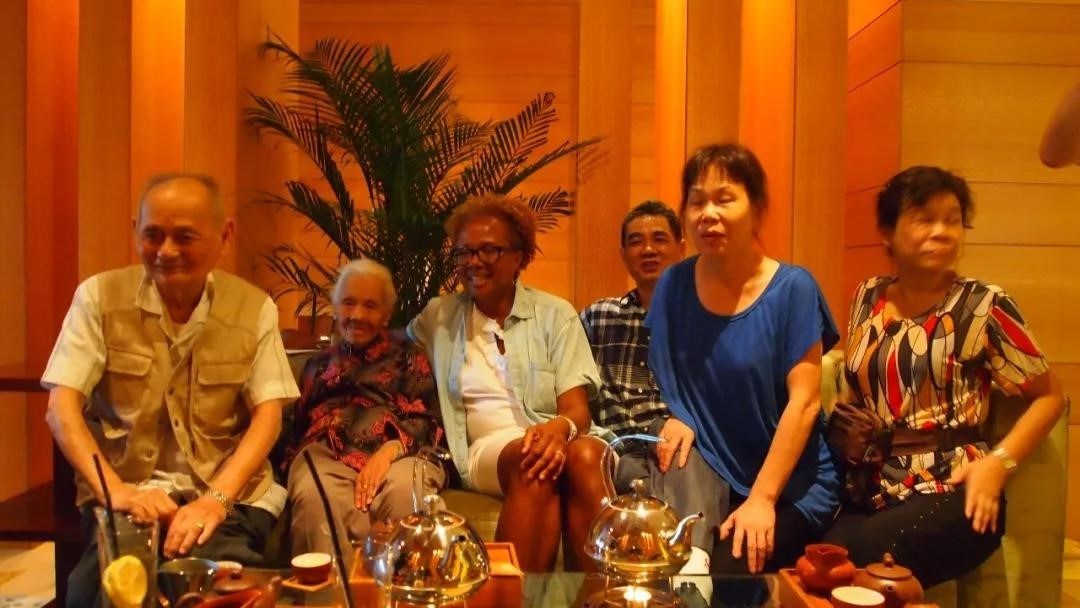 Paula’s grandfather came to Jamaica prepared to struggle when he was a young man, yet he had no choice but to return to China when Jamaica entered a period of intense turmoil after the economy had fallen into the doldrums and his business had failed. It was due to these circumstances that his three-year-old daughter, Paula’s mother, became separated from her father at an early age. For the mother, learning about her roots became a life ambition. She left Jamaica, settled in the United States, and did all she could to make sure that her children received a good education, yet she always held the dream of being able to find her relatives in China one day. Paula said she could feel her mother’s loss of paternal love and her desire to find her family. It was at a young age that she made up her mind to fulfill her mother’s wish to retrace her origins.

It was not until Paula retired that she finally made the first trip to China. When she arrived, she felt both overwhelmed and depressed, as she didn’t know where to even begin to seek out one’s relatives in a country as huge and as populous as China. During the next four years, she came to China at least four times. She spent time in Shanghai and Beijing to get a better understanding of the country of her origin. When she returned to the United States, she undertook a quest to learn all about Chinese culture. She even started listening to and developing an affection for Chinese music.

It wasn’t until 2012 that things changed. With high expectations about what the homeland would yield on this trip and her burning desire to complete what her mother had yearned for, she came to Guangzhou. When her 94-year-old aunt saw the photo of her mother, tears burst into her eyes. “She looks so much like our dad!” the aunt said. A hug and a smile rekindled the blood kinship that had been broken for nearly a hundred years. Paula felt very excited on the day and suddenly realized that China had taken on a whole new meaning for her. This place is now home, a place that she will miss and think about anytime she is back in the US and waiting to visit again. She felt that her soul, a soul without a home, had finally found that home and, with it, inner peace. She had finally fulfilled her mother’s wish, to bring her home.

With her newfound relatives, even though they don’t speak the same language, she felt she could understand their thoughts, just through the look in their eyes and their body language. Now, Paula has fallen in love with all things Chinese and sports a Hakka jadeite bracelet. She enjoys sumptuous Chinese food and yearns for the beautiful landscapes of her newfound native land.

This trip to find one’s roots not only helped her family realize the wish they had harbored for many years, but also awakened the sense of belonging in her cousin and in all her grandchildren. The tenacity and optimism coupled with the quiet stoicism of their forebears is what brought the family back together and, at the same time, inspired them recapture these same characteristics for themselves, to strive for progress, and to make the family that Paula created even more cohesive. Kim Yuet Lau also said that the grandchildren are preparing a different reunion – a return trip to Jamaica.

Paula said, “I’m Chinese, see? I may not look Chinese, but I am Chinese and I am happy to have rediscovered my family roots.” She stood up on the stage of Listen To Me and told the audience: blood is the root and culture is the soul. If the roots are there, the love is there as well.