Home / People and Culture / Finding the Others: the Graffiti of Jason Innocent

With a straightforward hand and the ability to quip on cue, Jason Innocent is pushing the art of graffiti into new territory. Innocent’s work trades on direct commentary, philosophical whim, and observation — as well as song lyrics and a tongue-in-cheek sensibility. He is tagging New York City with a bare style that feels personal, meant for you. 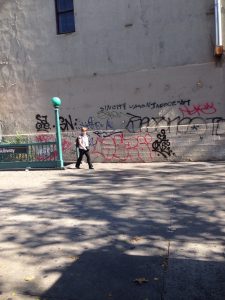 Frequently working in a marker, Innocent can tag quickly and discreetly. That serves his style well, as his work can show up in a public bathroom stall as soon as it can appear on the side of a building. It reminds you of the messages you once read on a desk at school, anonymously etched into the wood grain. These dispatches, given their naive style and candid placement, feel like they were written for you and you alone.

The artist’s Tumblr reveals the full range of topics and approaches available. There are literary allusions, glib critiques, jokes. Innocent often labels the obvious with delightful sincerity — like writing “THIS IS AN OPENING” on a trash can lid. All of these combine to paint a portrait of an artist playing a game with you through the city, challenging you to rethink the built environment for sheer pleasure and maybe more.

A Brooklyn native, Innocent, received his education at CUNY’s Medgar Ever College. In the traditional art space, he’s presented solo exhibitions at The Living Gallery (WALL) and Bright Stars and Social Issues (Bold Stripes), both in New York. He also participated in the group exhibition Beyond Bars: Freedom Plans at Columbia University. He’s made short films and plenty of visual art outside of graffiti. 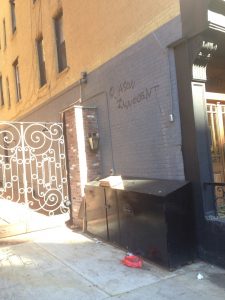 But the most exciting work Innocent is presenting exists in the streets of his city. And that is where we join him to understand what is going on with Jason Innocent.

The Search for Innocent

New York City is a tangled mess of construction. Nowhere else on the continent has such an extensive, densely packed system of human-made environments been assembled. This feature has always lent itself to graffiti. Sure, the vast number of people help — it’s best to place your work where there is a crowd.

But graffiti has stagnated over recent decades. Harsher enforcement and increased surveillance have shriveled the opportunities, and many of the old guard moved on to gain acceptance with the Christie’s crowd. This is not to say there is a shortage of talent in the field, to say the area needs leading voices. Innocent might be just what graffiti needs.

Innocent brings a new element to the table: something less pat than “graffiti meets the art of the tweet” — but not so far off. His work scribbles a path through the high and low, always in his approachable style.

On a temporary traffic barrier, Innocent writes, “NO TRESPASSING.” This is a joke, a commentary, and also a confrontation (as the artist himself no doubt trespassed to complete the work). And yet, perhaps on the same day, on an empty ad insert holder on the subway, he writes, “AND HEAVEN TURNED TO HER WEEPING.” The transparent plastic works almost like a mirror; the writing, a reflection. This is a wake-up call, a stirring reminder of the drama and tragedy of human life, and also the name of a famous John Maus song. Similar works include a spate of Nirvana references he has peppered through the cityscape. 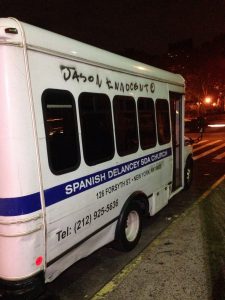 These pieces manage to clash with our typical sense of graffiti. It is a smile, a hello, a quiet joke shared between friends across the room. Sometimes it plays at being profound, just as sometimes it plays at being shallow. Like the playwright sages say, “The best dialogue tells the audience the opposite of what the words communicate.” One could adopt this adage to examine Innocent’s work.

His simplistic style is part of the act: each stroke carries heavy freight.

But Innocent is not likely to read those lines above and have anything but contempt for them. In his own words, as appearing on the side of a bin, “LINGUISTIC MERIT = BEING PROLIX IN LANGUAGE.”

The primary appeal of Jason Innocent is in his name. It appears innocent of intent in the play of interacting with strangers through the form of the city. If there are any politics in the matter, it is purely the fun-loving threads of the Situationist International. If there is any motive, it is strictly to enjoy the act. Innocent enough, it would seem. 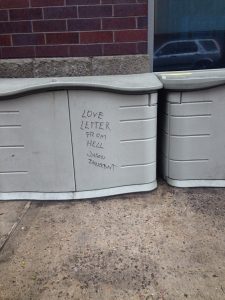 While we cannot ultimately know, we can look into the eyes of the faces he draws occasionally. These are doodles more than portraits. These are not piercing gazes into the heart of humanity, and instead, they seem to be compulsive acts. The Innocent faces draw (gloriously) not unlike those we brought in the margins of our textbooks while bored out of our minds in class. And so, the artist has taken to repeating them here, in the margins of our cities. It reminds us that we are bored, that so much of life is boring. It also reminds us that it doesn’t have to be this way.

And Innocent expresses this, not through a screed, or a complaint, or a strongly worded email. Innocent calls attention to our boredom through markings of his escape route — a bread crumb trail made up of song lyrics, witticisms, doodles.

Inside each work, one can read a grander message: go, go now, find the others who have gone before you, and leave a trail to lead people out. 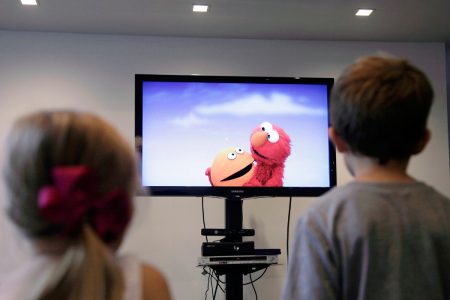 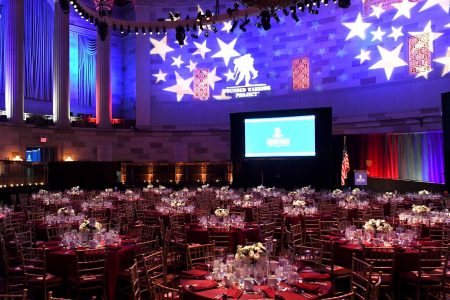