The Federal Trade Commission, along with 19 federal, state, and local law enforcement partners today announced a nationwide crackdown on scams that target consumers with fake promises of income and financial independence that have no basis in reality. The impact of these scams has intensified as scammers take advantage of the COVID-19 pandemic and financial crisis.

Called “Operation Income Illusion,” the crackdown encompasses more than 50 law enforcement actions against the operators of work-from-home and employment scams, pyramid schemes, investment scams, bogus coaching courses, and other schemes that can end up costing consumers thousands of dollars.

Income scams have a massive effect on consumers, according to a new analysis of FTC complaint data. Consumers have reported to the FTC that they lost more than $610 million to these scams since 2016, with reported losses of more than $150 million in the first nine months of 2020. The income scams that the FTC has pursued through its law enforcement actions in this sweep collectively bilked over a billion dollars from consumers.

“Scammers are preying on the unemployment and anxiety arising from the pandemic by making false promises of big income working from home,” said Andrew Smith, Director of the FTC’s Bureau of Consumer Protection. “If someone promises you guaranteed income, but then tells you to pay them, tell the FTC right away so we can work to shut them down.”

In addition to ten previously announced cases, the FTC is bringing four new law enforcement cases as part of Operation Income Illusion, as well as announcing a new settlement in a previously filed case. In these cases, the FTC is asking the court to stop the deceptive schemes and to get money back for affected consumers. Other agencies reporting actions as part of the sweep include: the U.S. Securities and Exchange Commission, the U.S. Commodity Futures Trading Commission (CFTC), the U.S. Attorney’s Office for the Eastern District of Arkansas, state agencies in Arizona, Arkansas, California, Florida, Indiana, Maryland, New Hampshire, Oregon, and Pennsylvania, and the Maricopa County Attorney’s office in Arizona.

Some of the schemes targeted in Operation Income Illusion had a noted impact on one or more specific groups: students, military families, people on a limited fixed income, immigrants, Black Americans, Latinos, the deaf and hearing loss communities, or older adults. A new analysis explores what groups of consumers were most likely to be affected in certain FTC income scam actions.

Digital Income System: On November 17, 2020, a federal court granted the FTC’s motion for a temporary restraining order against Digital Income System, Inc. and five individual defendants. The FTC’s complaint alleges that the Florida-based scam falsely told consumers that by selling memberships in the defendants’ programs, consumers were likely to earn large sums of money. For example, the website stated, “Consumers will earn between $500 and $12,500 per sale,” and “Every time one of our professionals closes a sale on your behalf, we will send you a huge commission check right to your doorstep.” The defendants allegedly charged consumers a substantial amount of money, ranging from $1,000 to $25,000. The complaint states, however, that the vast majority of consumers who paid the defendants never earned substantial income, and in fact many consumers earned nothing. The complaint alleges the defendants violated both the FTC Act and the Business Opportunity Rule. The Commission vote to authorize staff to file the complaint against Digital Income System, Inc.; Derek Jones Foley, William Foley, Christopher Brandon Frye, Jennifer Hedrick, and Kaitlyn Scott was 5-0. The case was filed in the U.S. District Court for the Southern District of Florida.

Moda Latina: The FTC’s complaint alleges that the company specifically targets Latina consumers in Spanish-language ads on TV with false promises of earnings at home. The defendants allegedly lure consumers into buying a work-at-home business with the false promise that consumers will earn “large profits” re-selling luxury products such as brand-name perfumes. Misrepresentations alleged in the complaint include “Want to have your own business and earn up to a thousand dollars per week?” and “Crisis? What crisis? I forgot about that ever since I started selling with Perfume Box. It completely changed my life and my finances.” The complaint also alleges that the defendants’ telemarketers routinely threaten consumers in violation of the Telemarketing Sales Rule. From March 2017 to August 2020, the FTC alleges, the defendants took more than $7 million from consumers who purchased their work-at-home opportunities but did not make the promised earnings. The Commission vote to authorize staff to file the complaint against Moda Latina BZ Inc., Esther Virginia Fernandez Aguirre, and Marco Cesar Zarate Quíroz was 5-0. The case was filed in the U.S. District Court for the Central District of California.

RagingBull.com: On December 8, 2020, a federal court granted the FTC’s motion for a temporary restraining order against RagingBull.com, LLC and its co-defendants. The FTC’s complaint alleges that the defendants fraudulently marketed investment-related services that they claimed would enable consumers to make consistent profits and beat the market. Instead, the FTC alleges that consumers—many of them retirees, older adults, and immigrants—have lost at least $137 million to the scam in just the last three years. The defendants claimed in their pitches that consumers don’t need a lot of time, money, or experience, and that the global coronavirus pandemic represents a great time to pay hundreds or thousands of dollars to learn their secret trading techniques, claiming in one ad that the pandemic “…might be the most exciting opportunity in decades!” The defendants also made claims like “Learn how you could DOUBLE or TRIPLE your account in One Week!” The Commission vote to authorize staff to file the complaint against RagingBull.com, LLC; Jeffrey M. Bishop; Jason Bond (formerly known as Jason P. Kowalik); Kyle W. Dennis; Sherwood Ventures, LLC; Jason Bond, LLC; MFA Holdings Corp.; Winston Research, Inc.; and Winston Corp. was 5-0. The case was filed in the U.S. District Court for the District of Maryland. The FTC thanks the New Hampshire Bureau of Securities Regulation and the U.S. Securities and Exchange Commission for their assistance in this matter.

Randon Morris: On December 1, 2020, a federal court granted the FTC’s motion for a temporary restraining order against Randon Morris and four companies he controls for perpetrating a telemarketing fraud scheme. The FTC alleges that the defendants initiated millions of robocalls nationwide to promote sham work-from-home business opportunity programs. The defendants lured consumers into purchasing these programs with false promises that consumers could earn hundreds of dollars a day and claimed an affiliation with Amazon.com where none existed. They also invoked the coronavirus pandemic in robocall messages to prey on consumers who are concerned about working outside of their homes during a national public health crisis. The order stops the defendants’ deceptive sales practices, freezes their assets, and appoints a receiver over the companies. The Commission vote to authorize the filing of a complaint against Morris, National Web Design, LLC, B2B Website Design, LLC, Amazon Affiliate Program, LLC, and R&C Consultation, LLC was 5-0. The case was filed in the U.S. District Court for the District of Utah. The FTC thanks the Utah Attorney General’s Office, the U.S. Marshals Service, and the Police Department of Orem, Utah for their assistance in this matter.

8 Figure Dream Lifestyle: The ten defendants in this 2019 case, who the FTC alleged targeted older adults while selling phony money-making opportunities, have settled the FTC’s charges against them. Under the terms of two stipulated final orders, the defendants either are banned from selling money-making methods or business coaching programs, and nine of the defendants are banned from using robocalls for most purposes, including marketing or advertising. In addition, three defendants are prohibited from selling any investment opportunities. The stipulated final orders impose monetary judgements totaling more than $32 million, which are partially suspended based on the defendants’ inability to pay. The defendants have surrendered assets totaling more than $1.25 million to the Commission, and if they are found to have misrepresented their financial status, the judgments will become immediately payable in full. The Commission vote to authorize the settlement with 8 Figure Dream Lifestyle, LLC; JL Net Bargains, Inc.; Kappy Enterprises, LLC; Millionaire Mind Enterprises, LLC; Spirit Consulting Group, Inc.; John A. Bain; Alex Dee; Brian M. Kaplan; and Jerrold S. Maurer was 3-0-2, with Commissioners Christine S. Wilson and Rebecca Kelly Slaughter recorded as not participating. The Commission vote to authorize the settlement with OEA LLC was 5-0. The stipulated final orders were entered by the U.S. District Court for the Central District of California.

In addition to law enforcement actions, the FTC has released updated information for consumers about a variety of income-based scams

All of these educational materials are also available in Spanish at consumidor.ftc.gov. As part of Operation Income Illusion, the CFTC and state authorities in Arizona, Arkansas, California, Colorado, Florida, Indiana, Maryland, Nevada, New Hampshire, Oregon, Pennsylvania, South Carolina, Utah, and Wisconsin, and the Fresno County District Attorney’s office in California have joined the FTC’s outreach efforts by disseminating the consumer education materials in their local communities. 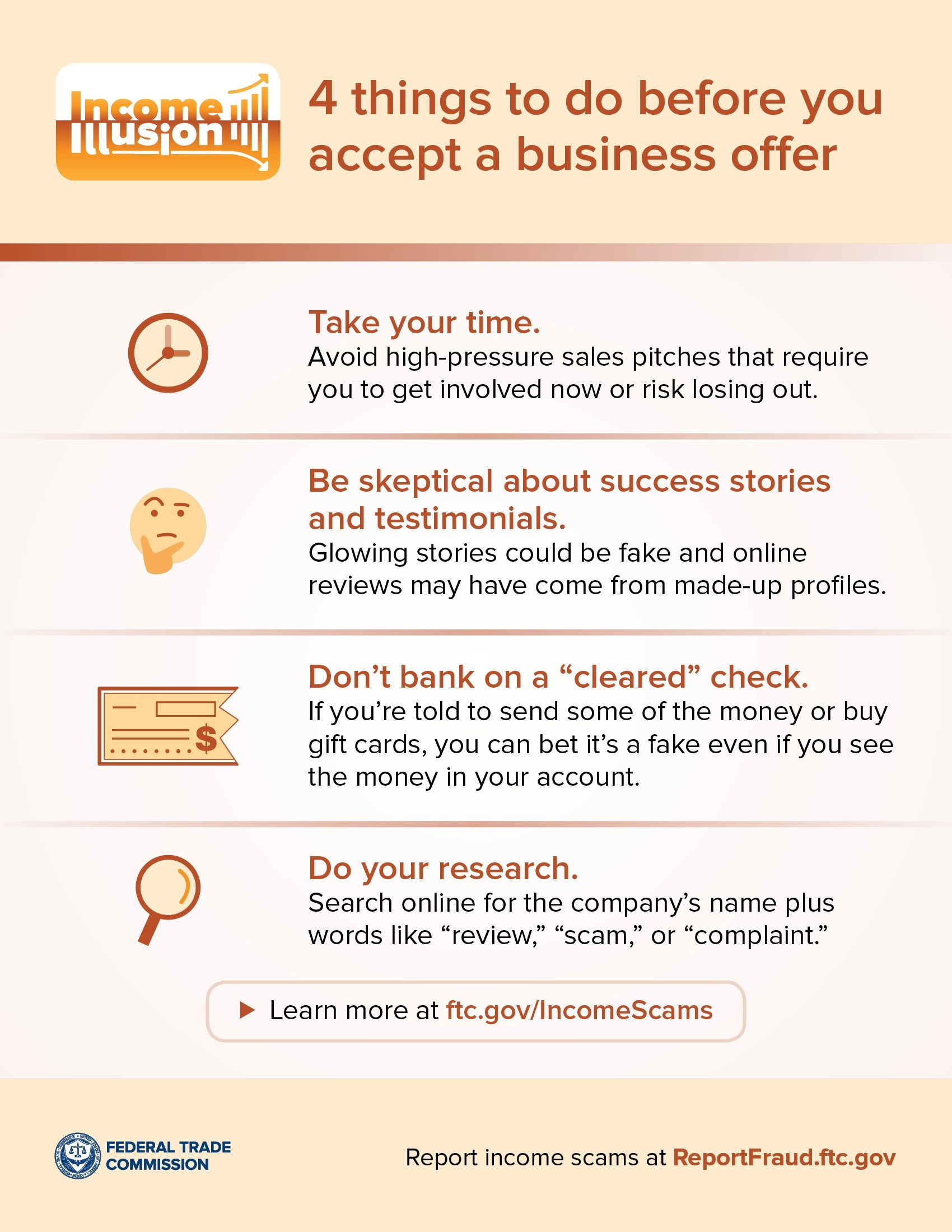 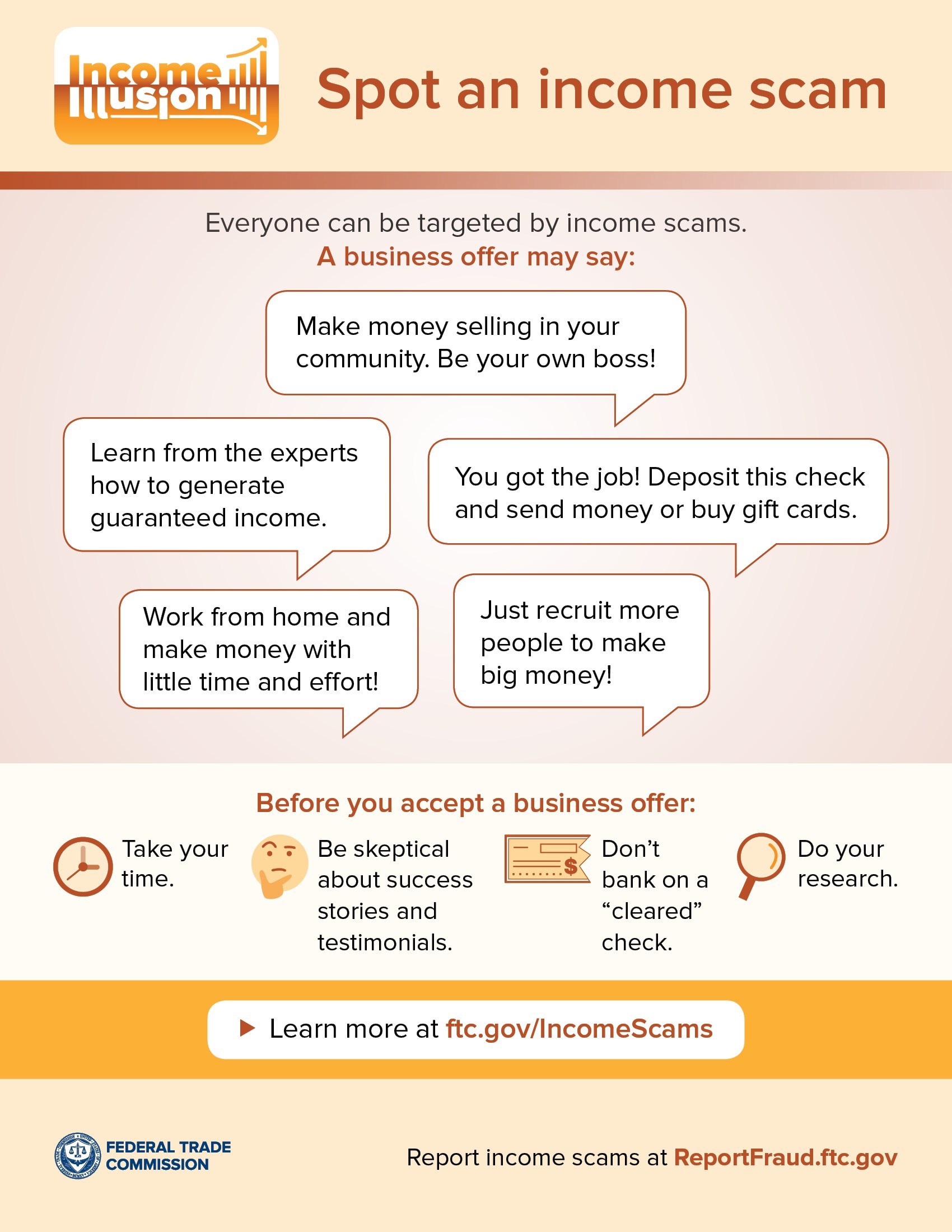