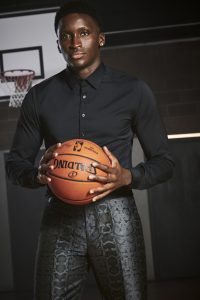 Through a series of digital and video assets, Express portrays the individual stories of each athlete, revealing not only how they made it to the league, but also the hard work, struggles, and successes they face as professional basketball players. With an emphasis on the Express Performance Collection and new NBA Licensed Collection offerings, the campaign reveals how fashion has become an integral part of each athlete’s life.

Express is leveling up its NBA partnership through collaborations with NBA 2K — the next iteration of the top-selling and top-rated NBA video game simulation series — and EA SPORTS NBA LIVE Mobile, the most played basketball game in the world. This gives customers access to in-game content and special offers.

“NBA athletes continue to evolve as fashion trend-setters and have become just as well-known for their personal style as their performance on the court,” said Sara Tervo, chief marketing officer at Express. “This upcoming season, we’ll continue to deliver relevant content plays and styling inspiration to our customers through our NBA Game Changers campaign and partnership with the league with a few new, exciting twists along the way.”

The integrated marketing campaign will premiere across Express‘ digital, social media, and in-store platforms as well as the NBA’s digital and social media platforms beginning this month.