Rehs Galleries is presenting an exhibition of Parisian street scenes by 20th-century French artist Antoine Blanchard (1910-1988). Opening on February 3rd and running through the 28th, the exhibit features examples of the artist’s work dating from the 1950s, 60s, and 70s, with views of Place Vendôme, Place de la Concorde, Notre-Dame, Théâtre du Vaudeville, the Arc de Triomphe and many others.

Blanchard, whose real name was Marcel Masson, was born in a small village in France just after the turn of the century. From an early age, Blanchard exuded artistic talent – in those formative years, he spent time watching his father work as a carver in his small carpentry and furniture shop. Antoine would begin his studies in drawing at Blois, continuing on to the Ecole des Beaux-Arts, Rennes, where he was awarded the school’s highest honor – Le Prix du Ministre. It was at that point that Blanchard left Rennes and traveled to Paris to further his studies – a city that would consume Blanchard’s oeuvre.

He quickly developed a love for the city and its street life, but that fascination was put on hold as World War II broke out, and Blanchard was called up for service. The following years were a tumultuous period in his life… he returned to his art in 1942, but a short time later his father passed away and Blanchard felt compelled to return to his hometown and run the family business. By the end of the decade, and following the birth of his second daughter, Blanchard turned the family business over to his younger brother and ventured back to Paris. 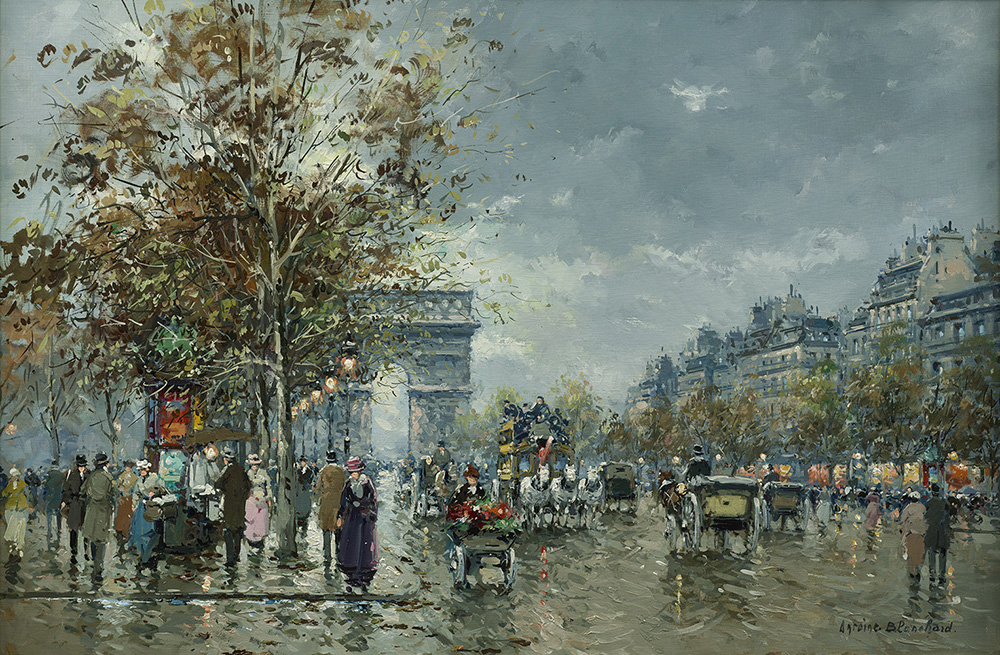 By then, contemporary life in Paris had changed, and Blanchard longed for the bygone days – he began to research the Belle Époque (1870-1914). That period, named in retrospect, was considered to be the “golden age” in Western history. Much of Blanchard’s subject matter would be scenes constructed from images he collected of Paris from those years as he rebuilt the city he fell in love with. As Mrs. Paule Larde notes, author of Antoine Blanchard, His Life His Work, “Although a large number of historical monuments remain, today’s Paris has little in common with Paris at the turn of the century; the scenery may be almost the same, but daily life… has totally changed; the customs have been entirely transformed. In his paintings, Antoine Blanchard invites us to relive this period by showing us pleasant strolls along embankments, squares, and boulevards at a period in Parisian life when time did not count, when one had all one’s time to idle, to stroll along streets, to window-shop, to walk quietly along the boulevards or spend the afternoon in a sidewalk café.”

Unlike many of his peers who worked in a hurried pace, Blanchard often spent weeks or months on a painting until he felt it was complete. Larde goes on to mention “he has always spent much time on his work. This explains why his production has always been rather limited… Delicate touches of luminous and shimmering tones produce a marvelous impression of harmony, brightness, and light.” While many others portrayed similar views, Blanchard developed his own unique style utilizing small, elegant strokes to create a distinctive haziness that enveloped his scenes.

Amy Rehs, the world’s expert on the artist, commented, “Over the past few decades, we have seen mounting interest in authentic paintings by Blanchard. Today, more than ever, collectors are looking for a chance to escape the hustle, bustle, and ‘social’ noise of the 21st century. Blanchard’s work gives them the opportunity for some well-deserved quiet time.”