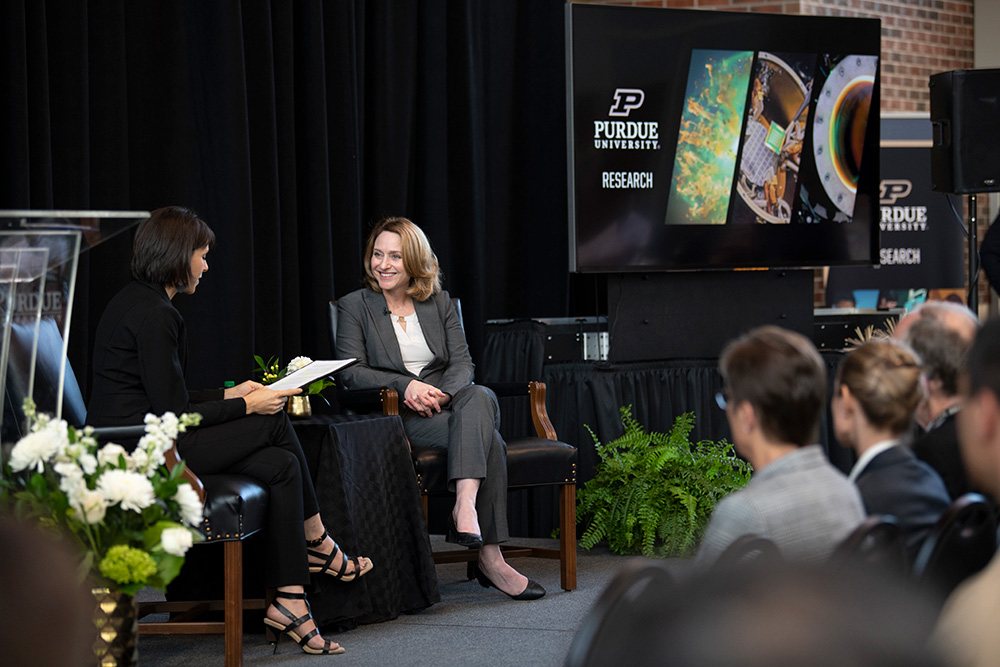 Last week Deputy Secretary of Defense Dr. Kathleen Hicks toured the Midwest, visiting U.S. Transportation Command in Illinois, the Air Force Research Laboratory in Ohio and Oak Ridge National Laboratory in Tennessee. As part of the trip, the deputy secretary also stopped by Purdue University in Indiana to meet with ROTC cadets there, to look at research facilities at the school, and to talk about how universities such as Purdue can best contribute to the nation’s defense.

At a gathering of students, faculty and guests at Purdue, Hicks noted that the school had recently been selected as the lead academic partner and headquarters for the Air Force Research Laboratory Regional Research Hub – Midwest.

“[AFRL’s goal is] to create a collaborative science and technology ecosystem, bringing together government, academia and the private sector that will accelerate the collision of ideas and talent to produce solutions for both DOD and commercial use,” Hicks said.

While at Purdue, Hicks visited the school’s Zucrow Lab and Hypersonics and Applied Research Facility — both responsible for development of hypersonics capabilities the department has prioritized.

“The research here will not only help develop the capabilities we need to defend the nation, but it will drive progress beyond DOD for the aerospace sector and other industries, shaping the next generation of commercial air travel, space exploration and beyond,” Hicks said.

Also a part of the tour was a visit to Birck Nanotechnology Center that, among other things, focuses on development of microelectronics and semiconductors — another critical priority for the Defense Department.

Purdue University is developing technology that benefits the Defense Department in areas like hypersonics and microelectronics, Hicks acknowledged. But she also said an area where Purdue is doing well, and where other universities like Purdue might follow, is in the creation of environments where research that benefits the department is able to flourish.

“It’s really about creating the kind of ecosystem that you’ve done so well here,” Hicks said. “That is bringing together innovators in the commercial sector alongside world-class research capabilities, investing as you are doing here in the facilities that make that possible and that attract talent, and then bringing government dollars, research and development dollars and talent as you’re seeing around this room with your ROTC and your graduate student population from the U.S. military together. That’s what you can keep doing so, I appreciate it.”

This type of environment, Hicks said, was also evident at both Oak Ridge National Laboratory and the Air Force Research Lab.

When it comes to microelectronics, Hicks said what’s needed at universities is the ability to take an idea for a microelectronics component all the way from a concept in a laboratory to manufacturing in a fabrication facility.

“What we need here is that lab-to-fab capability and so that means having the whole development cycle … right here accessible to a community, so that development cycle from the innovator on the outside — the basic research, the innovator on the outside — connecting, and then the fabrication capability for microelectronics here on shore, which we do not have today,” Hicks said. “That’s really vital to us.”

Another priority for the Defense Department and other federal agencies, Hicks said, is in radiation-hardened microelectronics, and that is something she recognizes is a research priority at Purdue.

“Those are the areas to keep going after, those kinds of capabilities that we are specifically reliant upon and [which] really help us in the national security community and throughout the U.S. economy by putting that whole development cycle here, together, to get the most innovation as quickly as possible,” she said.

When it comes to hypersonics, Hicks pointed out how a new facility being built at Purdue will ultimately help the Defense Department achieve it’s goals. The school is underway now in constructing the Hypersonics and Applied Research Facility, which will be host to two new wind tunnels. The new facility will include both a Mach 8 “quiet wind tunnel” — which will be the only one of its kind in the world — and the hypersonic pulse, or HYPULSE, shock tunnel.

“Just having that quality facility attracts the world-class talent to advance the research,” Hicks said. “One area we’re also very focused on at the Defense Department is counter-hypersonics. To the extent that that’s a research priority here at Purdue, and you can bring your scientists and engineers to bear on that, we certainly would welcome more collaboration in that area. But by and large, we’re down a very strong pathway right now in hypersonics. And I think the quality of what you all are bringing is a big piece of why.”