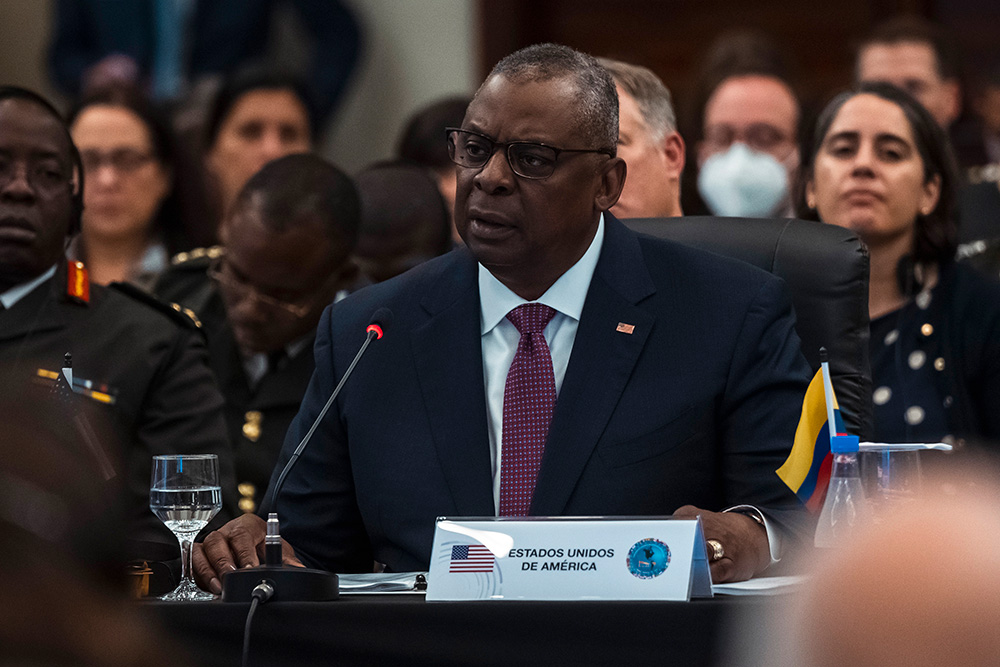 For the first time as defense secretary, Austin welcomed the chance to meet in person with defense ministers and counterparts from the Western Hemisphere, using the conference as an avenue to discuss their concerns and express his perspective of U.S. efforts in the region to deepen bilateral and regional cooperation.

Brazil hosted democratic nations from South America, Central America, the Caribbean, and North America at their capital of Brasilia.

It was the 15th meeting of the group, founded in 1995 by then-U.S. Defense Secretary William J. Perry.

Austin spoke to the ministers about the concept of integrated defense, said Daniel P. Erikson, deputy assistant secretary of defense for the Western Hemisphere. Erikson, who accompanied the secretary to Brazil, said Austin spoke about how integrated deterrence applies to the Western Hemisphere, placing emphasis on working seamlessly with allies and partners there and recognizing that partnerships are an enduring strength for the United States. 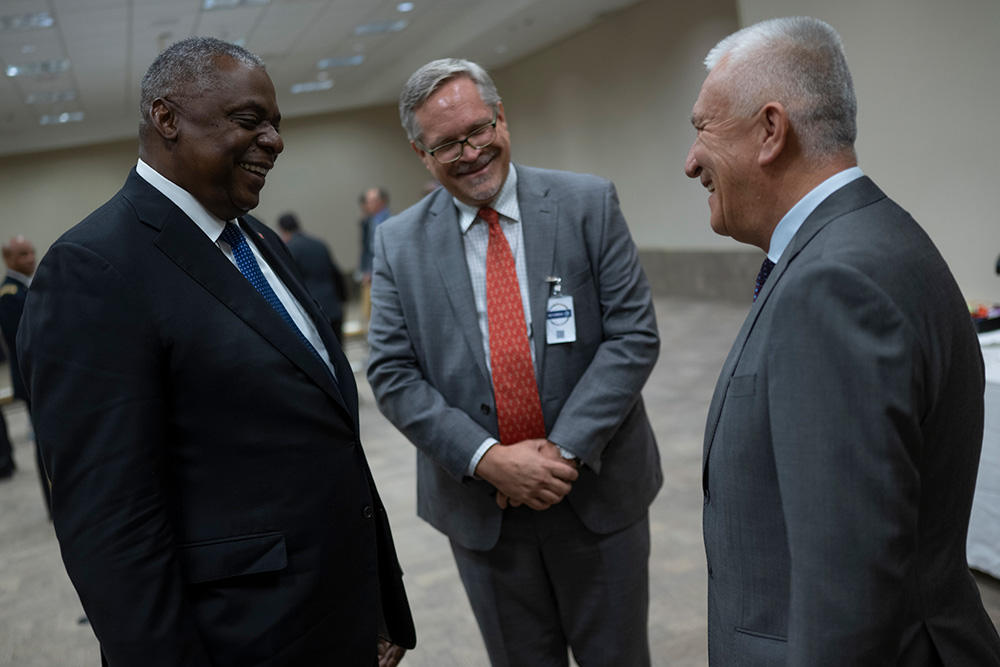 The democracies of Latin America and the Caribbean want to work closely with the United States. “In many instances, the countries share a common view of the challenges and opportunities,” Erikson said. “Whenever the [defense secretary] has an opportunity to engage directly with his ministerial counterparts in the region, it creates a huge opportunity for common understanding and for identifying concrete ways to move forward in terms of each bilateral relationship, as well as in the more multilateral setting that offers.”

There are problems in the hemisphere, Erikson said. Some of the democracies in the region are fragile, and there are problems with drug smuggling, human trafficking, uneven distribution of wealth, and more. Those problems were exacerbated by the COVID-19 pandemic.

Also affecting regional security is climate change. Austin told the leaders that no country can find lasting security without tackling the climate crisis. 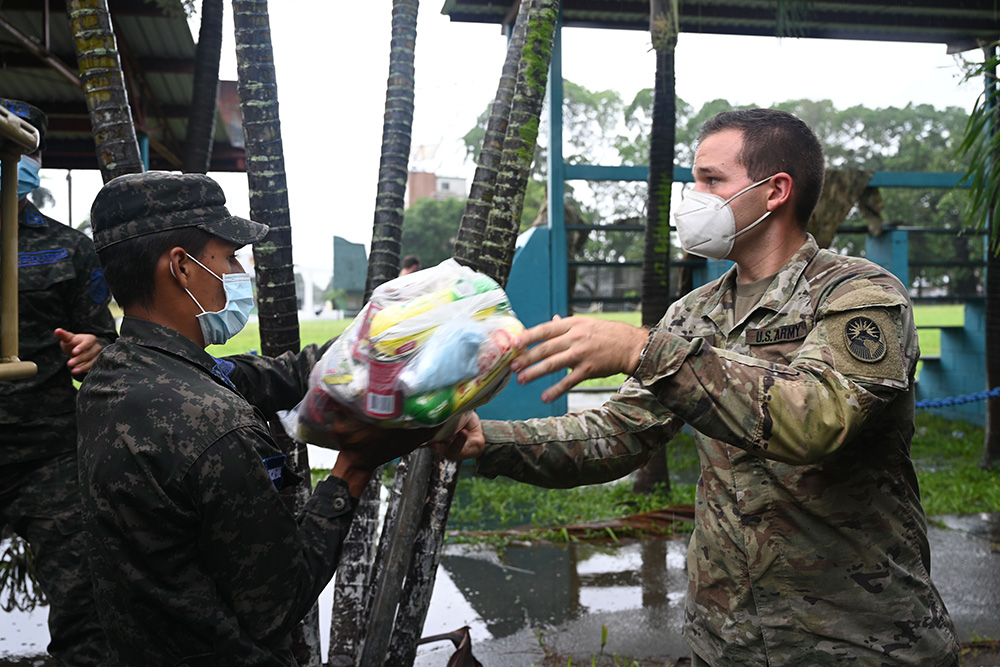 A soldier passes a bundle of food bound for those affected by Hurricane Iota to a Honduran air force airman at San Pedro Sula, Honduras, Nov. 23, 2020. At the request of the Honduran government, the U.S. military provided aerial support for relief operations in areas impacted by the hurricane. © Air Force Tech. Sgt. Jael Laborn

Climate change is already being felt by security forces in the Americas, Erikson said. Hurricanes are more frequent and stronger. In other areas, droughts are hotter and more prolonged. In still other areas, flooding is the problem. In each case, military forces are often called upon by civilian authorities to rescue people or help them cope with the aftermath, Erikson said.

The secretary also highlighted the need for cooperation in combatting cyber challenges. He called on the countries to think more thoroughly about their own cyber defense than they have in the past, Erikson said.

The ministerial conference is a unique opportunity for the defense and security leaders to “really lift up all of these different issues, identify ways that we can work together to more deeply to address them,” he said. 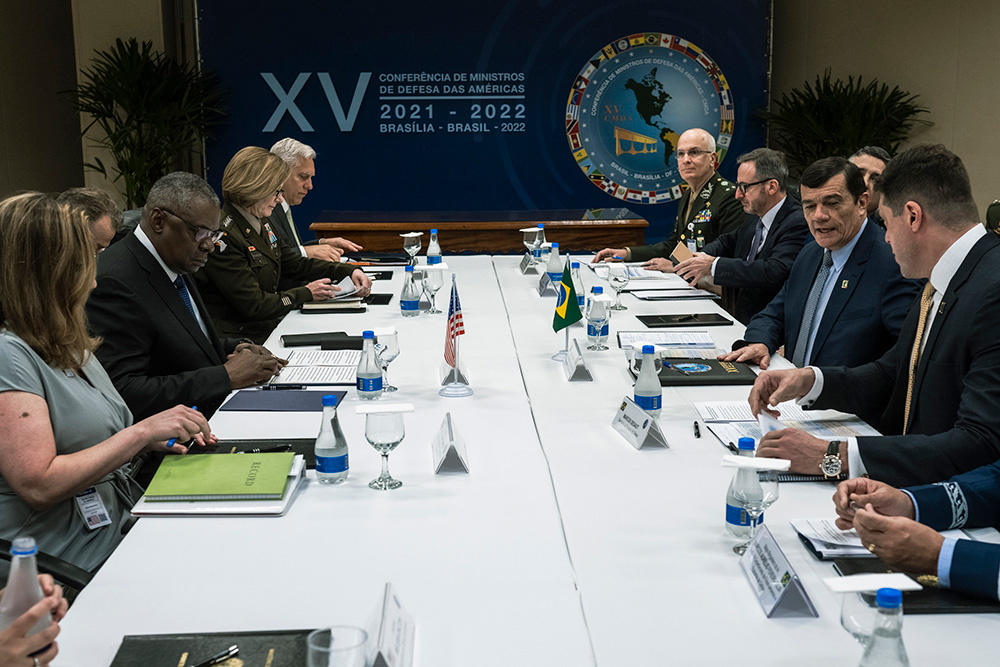 For a certain set of regional countries, China has become an important economic partner. Still, the United States remains the key defense partner for most of the countries in Latin America and the Caribbean “The secretary wants to underscore that he’s aware that China is seeking to have an increasing role in the region,” Erikson said. “He urged that countries carefully weigh what the cost could be of greater engagement with China.”

Just on the defense side, countries in the Americas have different perspectives on China. “Some share our skepticism,” Erikson said. “There are some that seek closer relations in the economic sphere. But I think that to have the U.S. secretary of defense travel to Brazil and engage with a range of counterparts in this region demonstrates the U.S. remains committed to be here as a partner.”

The secretary held many bilateral meetings with Latin American and Caribbean nations. They are interested in seeing how they could deepen partnerships with the United States to address their own security and defense challenges, the deputy assistant secretary said. “This could take place in the area of increasing domain awareness — especially maritime domain awareness,” he said. “In some cases, it’s about upgrading equipment and improving some of their military and defense capabilities. In other cases, it is about information sharing.” 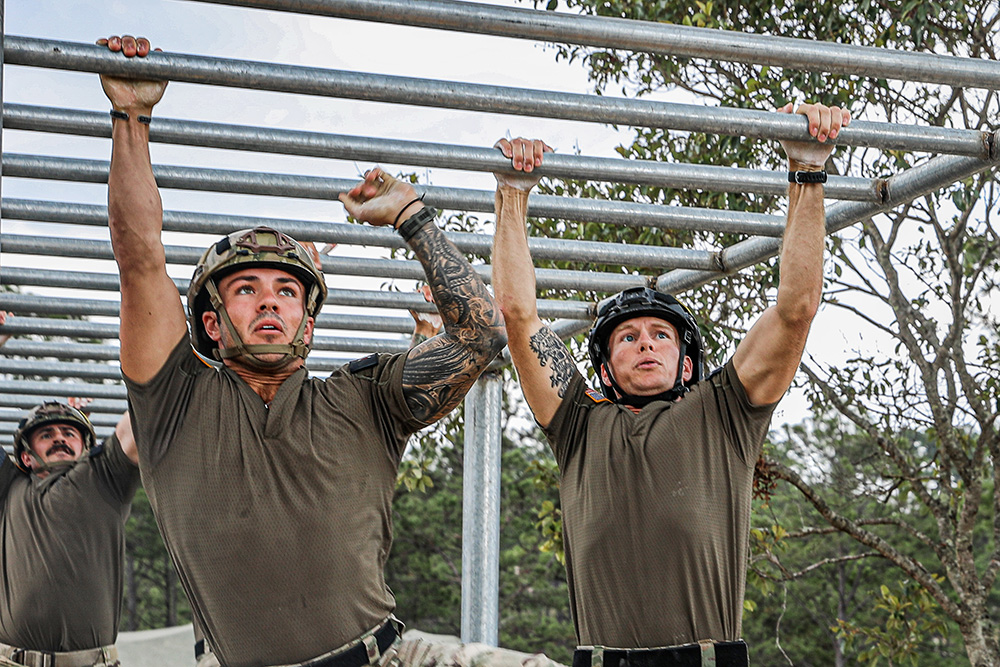 “Additionally, the secretary announced that the United States is prepared to host the next working group on Women, Peace, and Security …,” Erikson said. This program provides a pathway for greater participation of women in the military.

At the conference, the secretary announced several new commitments to the region, including allocating over $115 million in FY23 funding to build U.S. partners’ defense capabilities, which is on top of nearly half a billion dollars of U.S security assistance since 2020, Erikson said. 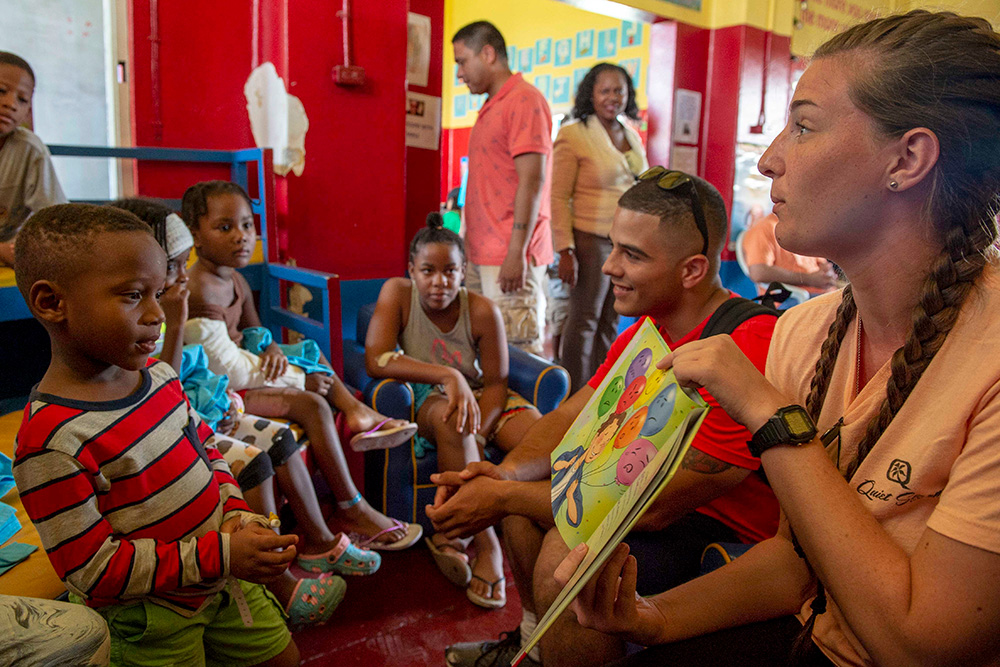 The secretary also announced the deployment of the Navy hospital ship USNS Comfort to the region in fall 2022 to alleviate the strain on partners’ medical systems.