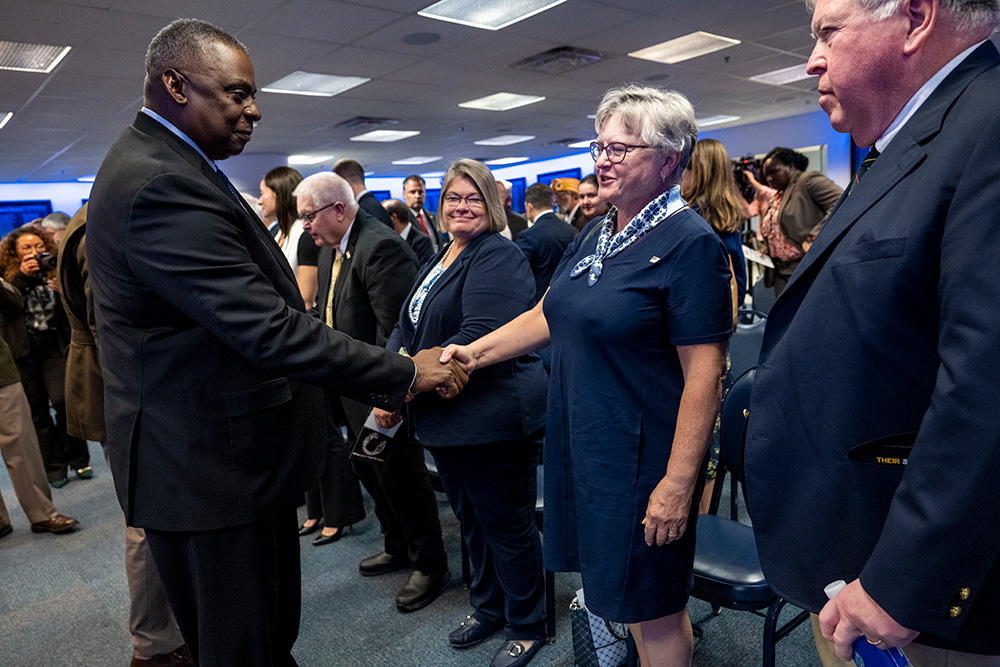 Secretary of Defense Lloyd J. Austin III met yesterday at the Pentagon with former prisoners of war, families of military members missing in action and staff from embassies of nations. The DOD works with these groups to account for missing American personnel and commemorate National POW/MIA Recognition Day.

“Every year on National POW/MIA Recognition Day, we gathered to honor American service members who were taken captive to stand with the families of the missing and the unaccounted for and to renew our commitment to bring home our missing heroes,” Austin said.

The Defense Department works to recover those who have been taken captive or who are lost in combat, Austin said. And earlier in the week, the remains of one such service member finally came home.

“As he neared his target, the enemy hit him with an anti-aircraft shell,” Austin said. “His plane was burning and damaged and he could have chosen to land. But Lt. Col. Baker was determined to complete the mission. He kept going until he hit his target. But afterwards, his damaged plane tragically crashed into the town below.”

The next, year, Austin said, Baker was awarded the Medal of Honor for his actions, even though the whereabouts of his remains were unknown at the time. The Defense Department, Austin said, never stopped looking for Baker.

“Nearly eight decades after his daring mission, scientists at Offutt Air Force Base used innovative forensic techniques to identify him,” Austin said. “This week his family got to say a proper goodbye and to bury Lt. Col. Baker at Arlington.”

Baker’s family members were present at the event. Austin met privately with them prior to the ceremony. 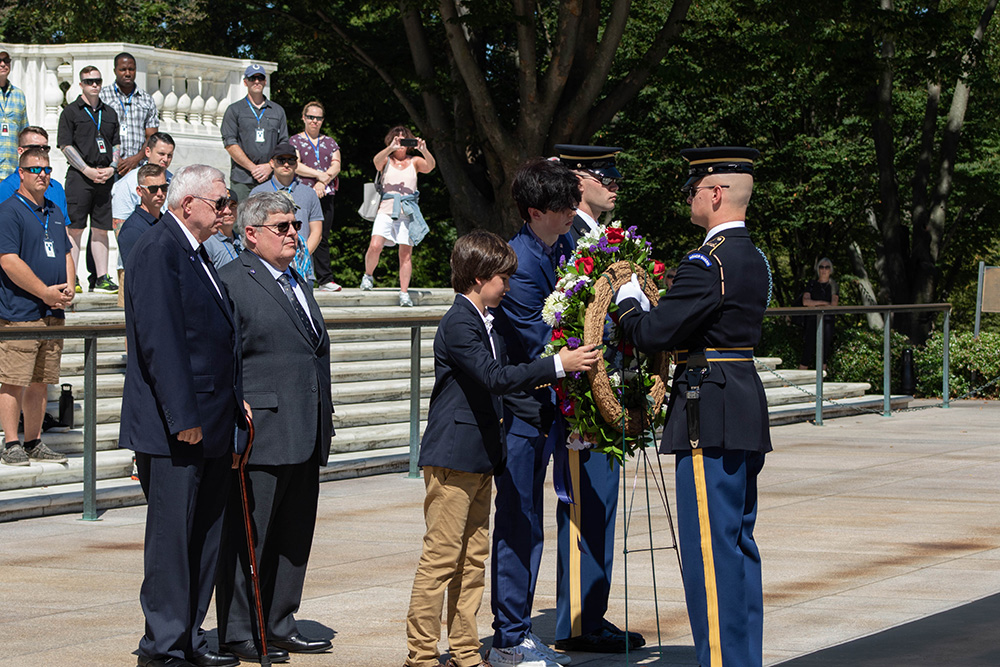 The great-great-grandnephews of Army Air Corps Lt. Col. Addison Baker, participated in a public wreath laying ceremony following the interment of their great-great-granduncle, Sept. 13, 2022. Baker, a pilot during World War II, went missing in action during an operation over Romania. After 79 years, his remains were accounted for by the Defense POW/MIA Accounting Agency. © Amber Vincent, DOD

Thanks to the work of the Defense POW/MIA Accounting Agency, Austin said, thousands of prisoners of war and service members who went missing in action have been recovered and their remains returned home to loved ones awaiting news back in the United States. Still, there are many more yet to be found, Austin said. The DPMAA estimates as many as 81,000 American service members and civilians remain unaccounted for. 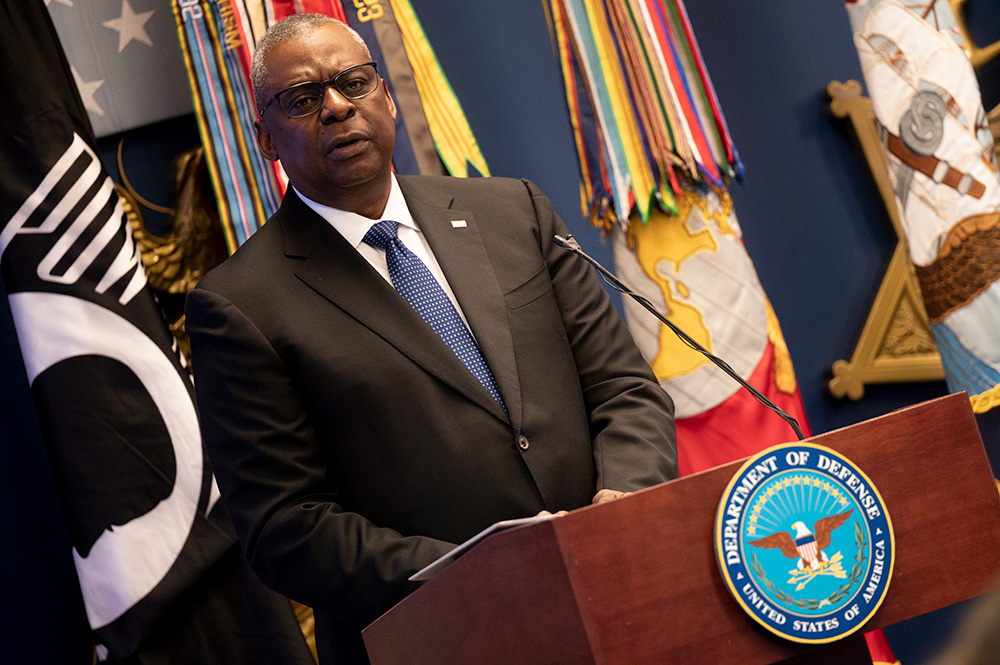 “This is a monumental task, but it’s also a sacred obligation,” Austin said. “Everyone who serves in the United States military makes a solemn commitment to this country, and their families do as well. And this country makes a solemn promise to them in return: to provide the fullest possible accounting for anyone who goes missing in the line of duty. And it’s our solemn obligation to do right by those who sacrifice to defend our security and our democracy.”

Experts at the Defense POW/MIA Accounting Agency, Austin said, work in 46 countries around the world, searching for remains and using cutting-edge forensic technology to identify the missing. The DPMAA doesn’t do that work alone, however.

“Our partners around the globe lend vital support, including former foes that have become friends,” Austin said. “And family and veteran service organizations, many of them here today, shine a spotlight on this important cause and help us fulfill our pledge to those who have served.” 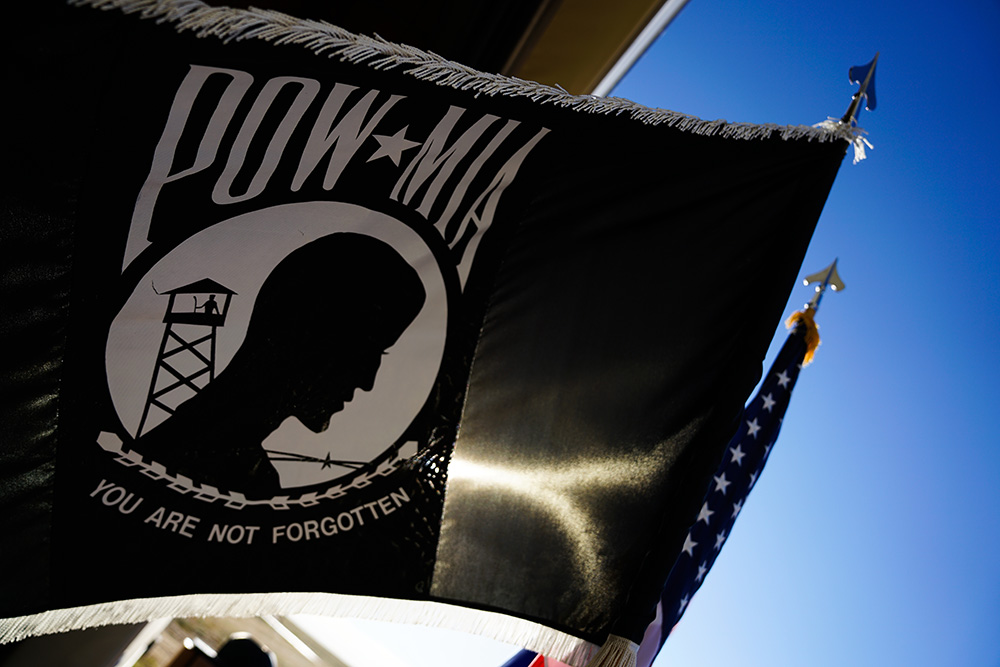 Today, the DPMAA estimates there are more than 81,000 Americans still missing from past conflicts ranging from WWII until the Gulf War. So far in fiscal year 2022, the DPMAA has completed nearly 100 missions in 37 countries searching for American personnel and has accounted for more than 140 missing American military members, each with their own story.

“These are stories of pain and uncertainty, but also of hope and endurance and relief, when long-sought answers are finally found,” Austin said. “The black and white flag that we fly in honor of our POWs and MIAs, bears a simple but powerful message to the families of those still missing and to all those who serve, and to our nation. And that message is that we will never forget. We will never give up hope, and we will never stop working to find answers and to bring home our missing.”