Strategy drives programming and resource allocation. The interim National Security Strategy released earlier this year set out the broad parameters for how the United States will engage abroad to protect Americans at home, she said.

“In particular, it calls for doubling down on building partnerships throughout the world, because our strength is multiplied when we combine efforts to address common challenges, share costs and widen the circle of cooperation. DOD’s security cooperation activities are nested within this guidance,” she noted.

The State Department’s diplomacy is in the lead, she said, adding that DOD programs fall within a whole-of-government approach to the region. 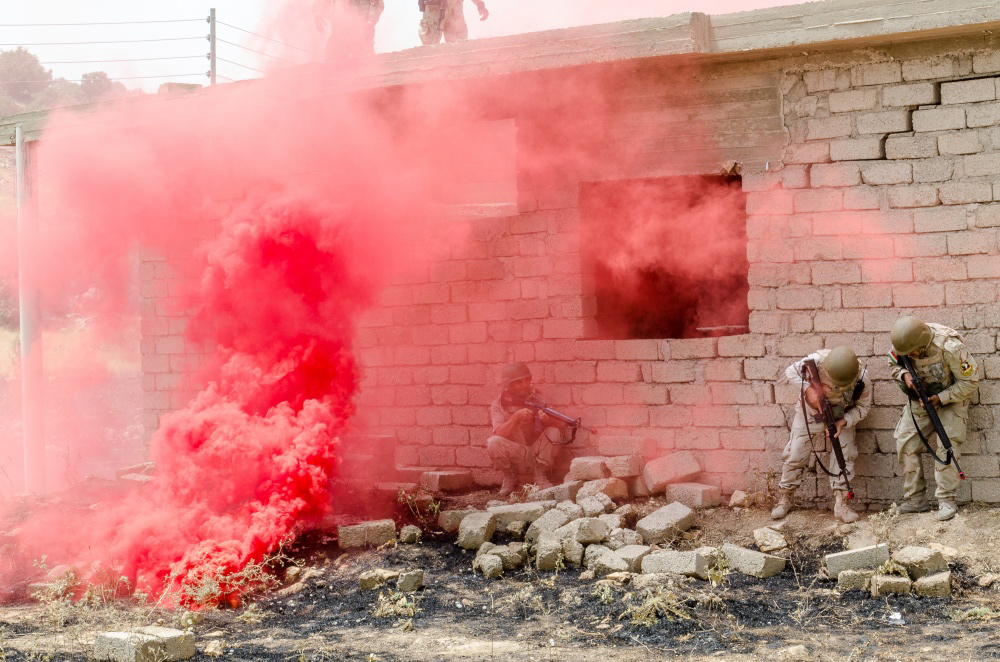 Peshmerga soldiers use smoke cover to more safely approach a building in a village during the Modern Brigade Course 2 final exercise at a training site near Atrush, Iraq, July 25, 2016. The MBC2 final exercise tested the training and skills of the Peshmerga through practical scenarios, including assaulting a hill and a village and defending a trench line. This training was provided by U.S. coalition trainers in support of Combined Joint Task Force-Operation Inherent Resolve multinational effort to train and equip local fighting forces to defeat ISIS. © Army Staff Sgt. Peter J. Berardi

“We utilize security cooperation authorities and programs to expand the capabilities of willing partners to respond to urgent security needs, and invest in the institutional growth of partner forces to share the responsibility for regional security,” Stroul said.

Over time, the United States’ goal is to partner with self-reliant, capable and accountable partner forces who will work alongside the nation to achieve mutual objectives based on shared threats and shared interests, she said. A long-term proposition, security cooperation programs are also designed to ensure that the United States maintains access to key areas and facilities to support the defense of its partners, respond to potential contingencies, and to protect U.S. personnel, she said.

“DOD security cooperation activities include exercises, education and training, operational planning, institutional capacity development efforts such as security sector reform, strategic planning and doctrine development, human resource management, defense, budgeting, training and advising, as well as the transfer of defense articles and services within each of these categories,” she told the panel.

There are opportunities and requirements for DOD to demonstrate and impart U.S. values such as support for rules-based international order, respect for the rule of law and civilian control of the military and commitment to fundamental freedoms and human rights, Stroul said.

Security cooperation activities reinforce broader U.S. objectives, she said. An example is normalization, as Israel moves into the U.S. Central Command area of responsibility where the United States can use military exercises and U.S.-convened professional education programs to provide opportunities to facilitate normalization and build upon it, by encouraging relationship-building between Israel and Arab militaries’ cooperation to counter the threat of attack unmanned aerial vehicles versus drones.

“Given the shared regional threat of the Iran-supported UAV network across the region, we can use security cooperation programs to advance shared regional defense burden sharing, while the [United States] seeks to remain the security partner of choice in the Middle East,” Stroul said.

“Improved integrated regional security among partners is key as the United States right-sizes its posture in the region,” she said.

As for strategic competition in the Middle East, building the capacity of partners is critical to reducing their vulnerabilities to aggression and coercion, and improving their ability to defend their sovereignty, their interests and a free and open international order, Stroul noted. A critical tool [in] encountering U.S. competitors like China and Russia is to provide superior training and equipment to meet partners’ needs, she said.

Congressional consultation and oversight is critical, she said, adding, “Thank you for Congressional bipartisan support for security cooperation authorities, programs and funding for the Middle East, and in exercising robust and necessary oversight and monitoring to ensure that security cooperation resources remain aligned with U.S. objectives, and continue to be in the interest of the American people.”