As the award-winning writer, director, filmmaker James M. Perry continues to make strides in the filmmaking field with short films like Disillusion and Invisible War which debuted at Time Square’s AMC Theater and Prince Theater in Philadelphia PA. We follow the filmmaker as they stay creative during the COVID-19 lockdown to polish up their script for their debut feature film “The Act of Indemnity”

James M. Perry, a native of Baltimore Maryland. After overcoming the odds, the self-taught writer and director found solace in his ability to imagine. After producing his first video in his late teens, Perry envisioned the realities of filmmaking. Inspired by creative legends, some of Perry’s works are influenced by the legendary Stanley Kubrick. Perry’s work has been introduced at various film festivals, both overseas and domestic.

James M. Perry’s motivations stem from the desire to express thoughts through storytelling. Thriving on diversity and delivering fresh perspectives, his experience engages with audiences and promotes conversations while consistently impacting the cinephile communities. 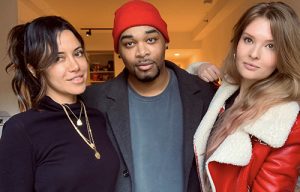 He is currently in pre-production on his highly anticipated feature film “The Act of Indemnity” which stars Lorena Sarria and Victoria Oliver. It’s a story of self-worth, regrets, and rehabilitation. It follows a former drug dealer Isabella James, portrayed by actress Lorena Sarria, reuniting with their ex-lover Alexandra Throne, portrayed by Victoria Oliver, while working as a federal informant. It will also have great supporting characters that have their own story that will complement the main narrative.

Producing my first film. To open the door and become an investable artist I knew I would need to invest in myself. This lead to my first screening Manhattan New York. That would be the beginning of my journey to where we are now.

What creative perspective means to you:

Using your voice to say something through your art.

Past and present creative icons (who inspired you creatively):

Stanley Kubrick, Spike Lee, Christopher Nolan, Martin Scorsese, Anthony Minghella, and John Singleton to name a few. They all have their own identity and
are considered legends and trailblazers, something that I inspired to be.

The place where I feel the most creative:

Whenever I’m traveling or simply amongst people. Ideals will come to mind. I’ll put my phone out and begin taking notes so later when I take a seat I can channel those ideas into a story.

Being out with a group of people that I am comfortable with and simply having conversations about everything. It’s very liberating, ideas are exchanged and sometimes drinks are poured.

What inspires me to create:

Being able to create conversations with our art.

If money was not an option I would:

Build a production of various production houses for young creators, from artists, filmmakers, and tech.

As Perry continues pushing beyond, we look forward to what Perry has to offer.