While waiting for the announcement that that life could slowly can go back to normal also in the US, as in other countries, we already start to see an innate surge in optimism, a thirst for recovery, wellbeing, and a lifestyle made of open spaces and bright lights.

‘Adaptation is key, the unthinkable can be confronted, managed and surpassed. This is the coronavirus lesson, that humans are utterly adaptable and unstoppable even in the most distressing situations’ comments Collini Milano’s owner Carmine Rotondaro.

Indeed, humanity as a whole was unexpectedly and heavily tested during the past three months, and side effects are surfacing on many levels. 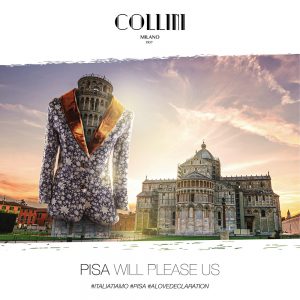 A renewed and powerful sense of right and wrong

Despite being one of the most heavily impacted industries, the fashion world has been reacting with a renewed and powerful sense of right and wrong, as we witnessed in the past few weeks with communications from the most celebrated designers around the world.

‘I suspect that the secret behind the new energy that will bring the fashion community at large to success again, lies in our values, in our traditions, and in our innate love for true beauty – adds CEO Rotondaro during his conversation with campaign director Ilaria Niccolini. And he continues – we had almost given up to the temptation to believe that only trends and selfish opportunities should be the backbone of our work, of our companies, and, worse, of our vision… then COVID19 forced a reality check onto us’.

It is therefore not surprising that the new COLLINI MILANO campaign focuses on these values, and in doing so brings to the surface an emotional call to visit Italian treasures such as Rome, Florence, Venice, but also Siracuse, Bologna, Capri. All of them pearls of architecture, of culture, and of history, so often exploited in the past due to lack of care and respect, and ready now for a new wave of love that tourism and the general public will devote to the Italian (and worldwide) patrimony that our generation has inherited through history, throughout the centuries.

Celebrities, passion, and a rebellious attitude

Luxury in 2020 is exactly this: the ability to transfer values, visions, dreams, and wellbeing from generation to generation. Collini Milano’s capsules become visually integrated into the most iconic architectural treasures as a ‘Love Declaration’. Its passion for beauty and the rebellious attitude that gives voice to its collections make it ready for this new renaissance.

Collini Milano‘s versatility, hence, finds its natural home in prestigious cover-stories with worldwide celebrated stars such as Neymar Jr, Fan Bing Bing, Natalia, just to name a few, while the Maison prepares an intense promotional activity for its new E-commerce inventory for Summer and Fall, the core of ‘A LOVE DECLARATION’ campaign.