Front Page / Policy and Public Interest / Citizen Capitalism: How a Universal Fund Can Provide Influence and Income to All

Against a background of declining civic engagement, unity, and financial security for many Americans, a new book proposes a bold but simple antidote that Adam Smith himself would love – a privately administered fund in which every adult U.S. citizen gets a share. Each share of this “Universal Fund” would offer income generated by the fund and shareholder voting rights. And unlike various trendy universal basic income proposals, the Universal Fund would require no government funding – relying entirely on private money that is already there. 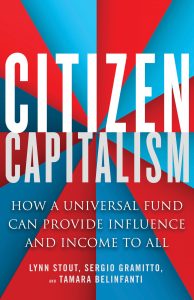 In Citizen Capitalism: How a Universal Fund Can Provide Influence and Income to All (Berrett-Koehler Publishers; January 29, 2019; Paperback; 9781523095650; $19.95), authors Lynn Stout, Tamara Belinfanti and Sergio Gramitto lay out a point-by-point plan that would result in every U.S. citizen being able to participate meaningfully in our country’s capitalist and shareholder systems, by receiving a share of the Universal Fund, which would be similar to a mutual fund. Once the Fund is set up, corporations would have incentive to contribute to the Fund. Corporations, who have faced criticism for share buyback programs, will instead be able to strengthen the corporation with a Universal Fund donation, the authors explain. As the book shows, additional incentives exist for wealthy individuals to donate.

The idea that corporations may help save the country from some of its worst ills and actually increase civic engagement may seem like a quaint notion today, but historically this is part of what corporations were designed to do – not just make short-term money for a few private shareholders, said co-author Tamara Belinfanti, a New York Law School professor who has been named an Aspen Ideas Scholar for her work on the roles and rights of corporations in the broader societal sphere.

“Unlike Universal Basic Income proposals, Universal Fund fits in with capitalist ideals – it does not rely on government funding, and also does not rely on government-directed redistributions of wealth,” Prof. Belinfanti said. “We’re giving citizens a financial incentive to participate in our shareholder system and through that, to address issues that impact every citizen. For corporations, the incentives and money are already there – only the structure is not.”

The book presents an alternative take on why corporations that otherwise touch every area of our lives and have a keen understanding of what makes people tick, seem so disconnected from citizens. The Universal Fund would change that, while providing a small but increasingly meaningful amount of income to every adult U.S. citizen.

“The Universal Fund does not jeopardize capitalism, nor does it dilute it or convert it into a socialist agenda. Instead, it reinvigorates it,” the authors write. “The framework that we have presented paves the way for a path forward in a manner that honors the brilliance of capitalism and harnesses its power as a tool for building a more inclusive and better future. It is a private solution to a civic problem.”

The book points out that S&P 500 companies are spending between $400 billion and $600 billion on share repurchases annually, which are just sitting on their books. Those shares could easily be donated to the Universal Fund, the net result being that the corporation would gain a long-term shareholder while at the same time signaling a commitment to building a sustainable future – which can bring its own value to the corporation. Ultra-high net-worth individuals would have similar incentives to contribute to the Fund.

“There’s every reason to believe that the Fund can make corporations more sensitive to the interests of average citizens while actually creating long-term shareholder value,” Prof. Belinfanti said.