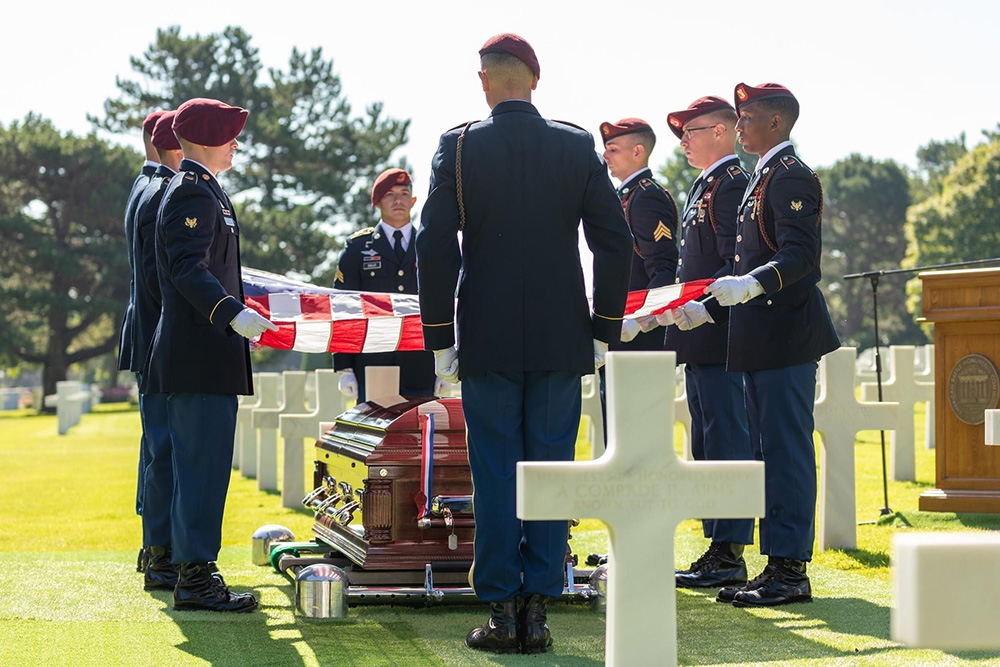 Most of the duties of Installation Management Command Europe’s Europe and Africa Casualty Assistance Center, or CAC, happen behind the scenes. Training, reporting, following up on medical statuses, arranging travel – the team is on call day and night to ensure the loved ones of wounded and deceased Soldiers have the support they need from the Army during difficult times.

The team recently saw their efforts in a more public light with the internment of U.S. Army Air Forces 2nd Lt. William J. McGowan who was laid to rest at Normandy American Cemetery nearly 80 years after he was killed in operations in France during WWII.

This case is unique, said Alonza Royal, CAC chief. “Being that this is a World War II Soldier, it’s high profile, and we are going to have a lot of moving parts that we are responsible for. Mr. (Jermaine) Sanders and Mr. (Sean) Osborne, they’ve been working on it for about three months now, getting everything together – a little longer.”

Sanders and Osborne not only worked with the local casualty assistance officer for the U.S.-based family, but also worked with the American Battle Monuments Commission and other Army units to coordinate an honor guard and flyover to commemorate McGowan’s sacrifice and the long road to his final resting place in France.

Wanting to help others is common trait of those on the CAC team.

“This job is not cookie cutter,” said Tamas Filippi, a casualty assistant with the CAC and former police officer. “Every case is unique and different so they give you the opportunity to do the best every time.”

The eight-member civilian CAC team covers this responsibility for Soldiers, family members and civilians across an 86-country area including countries in Europe, Africa and parts of Asia.

“As you can imagine, we have no way of managing that area all alone,” Royal said.

Outside of IMCOM-Europe’s garrisons, which each have a casualty assistance manager, the CAC team coordinates with Army personnel at embassies and unit casualty notification and casualty assistance officers to provide notification and assistance to families. For injured service members, the team works with Army and host nation hospital personnel to ensure timely updates are provided to the families. If need be, they also ensure family members can travel to the Soldier’s bedside.

Ensuring garrisons and units have enough trained casualty notification and casualty assistance officers is the job of the CAC trainers, who travel across IMCOM-Europe to provide the three-day training to qualified Soldiers. The trained CNOs notify next of kin of their family member’s death, while the CAOs provide assistance until all survivor benefits and entitlements are established. Families are then introduced to the next level of care, Survivor Outreach Services, which is a part of Army Community Services and their Army support service for as long as they choose.

“We’re asking them to do this, but they’re never alone,” said senior trainer Diane Hamlette of the CNO and CAO Soldiers. “The Casualty Assistance Center is their primary source of support … Performing this duty does take a toll on the individual. It is something they will never forget.”

In 2016, Hamlette said, a grief and bereavement component was added to the training to ensure the assistance and notification officers were also taking care of themselves and were in a place in their own lives to handle the duty.

“When it comes to being certified as a CNO/CAO, you have to be ready to step into that role to be there for that family,” Hamlette said.

During the training Hamlette encourages trainees to talk to their own families and to ensure their own paperwork is up to date. Time permitting, she also offers training for younger Soldiers and spouses to stress the importance of preparation and discussions with loved ones.

“The more you prepare your family, I think it empowers them.” Hamlette said.”

Soldiers are required to update two forms yearly or anytime there is a significant life event such as a marriage, divorce or birth of a child. These two documents are very important in the case of a Soldier’s death: the SGLV Form 8286 (Service members’ Group Life Insurance Election and Certificate), and the DD Form 93 (Record of Emergency Data).

Taking care of each other

Besides ensuring families are taken care of and notification and assistance officers are set for duty, the CAC team members also take care of each other.

“When I walk out the door, I try to leave it right there on the desk and come back the next day,” Sanders said. “I don’t try to take it home with me and dwell on it because you start dwelling on it is when these things start to take effect.” Although he said he leaves his work at work, Sanders was recently recognized for his care of others when he helped a community member in distress.

Besides encouraging his team members to take time for themselves, team activities also are important to keep lines of communication open, Royal said. Barbeques, office decorating competitions, walks and visits from the chaplain all encourage team members to communicate.

“We do that to try to take our mind off the very, very important role that we have to play,” Royal said. “I will be kidding you if I said that some of the cases don’t crawl under your skin.

“We try to keep the work environment as light as possible, even with the heavy load that we bear,” Royal said. “I think that’s very, very important. Work environment is number one when it comes to casualty operations.”