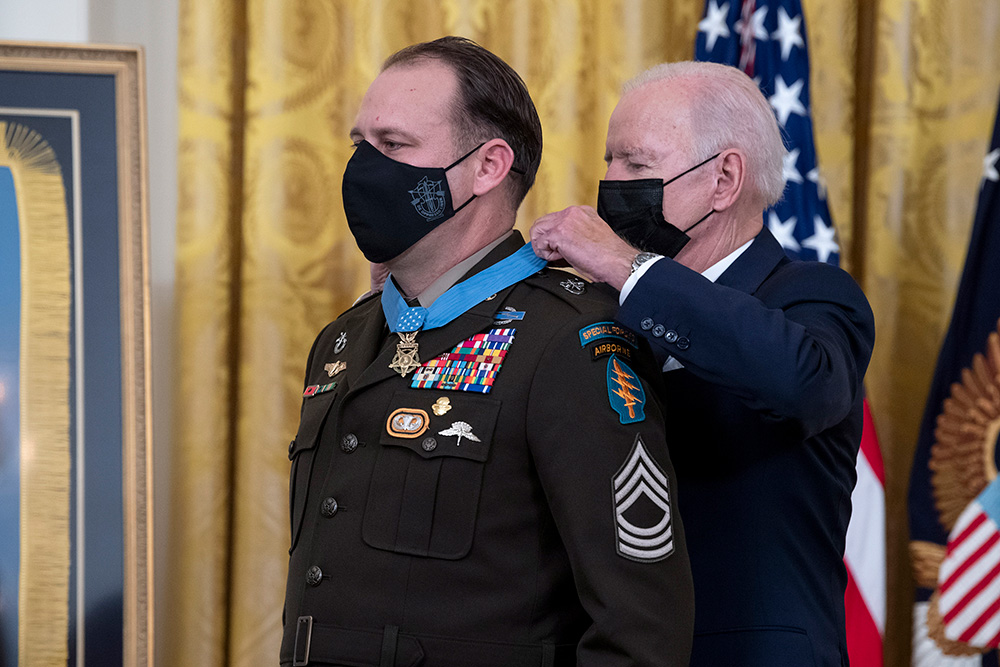 During a White House ceremony on Thursday, President Joe Biden awarded three U.S. soldiers with the Medal of Honor. 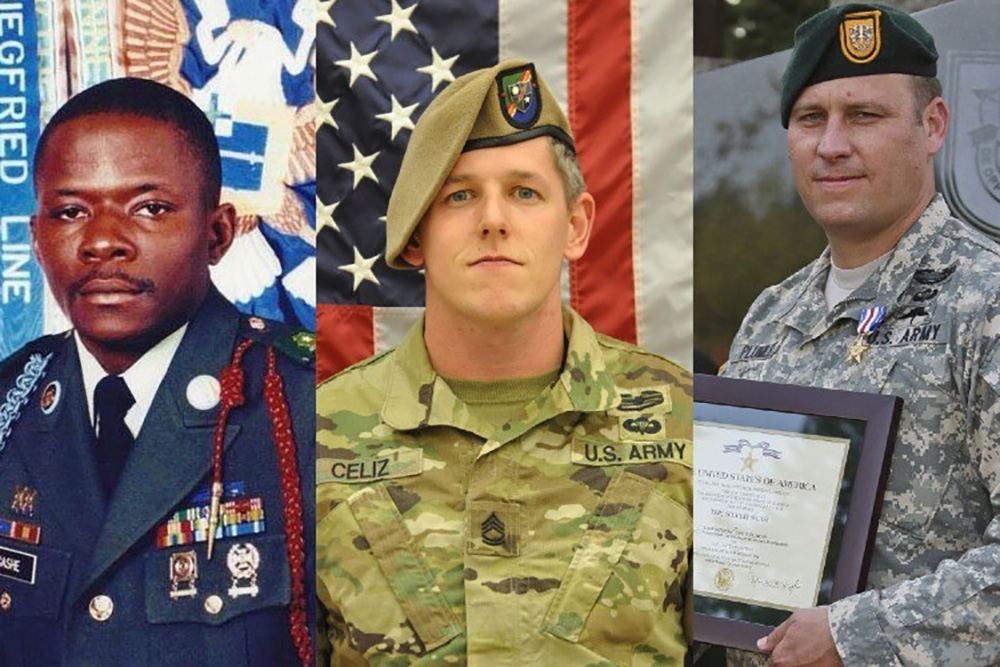 Cashe earned the country’s highest military honor for actions in Iraq more than 16 years ago. On Oct. 17, 2005, in the middle of the night and with limited visibility, he rescued six of his troops and an Iraqi interpreter from a burning Bradley vehicle. Even while flames engulfed him, he continued to return to the vehicle until all his troops had escaped.

In Afghanistan, Celiz earned the Medal of Honor for his selfless actions on July 12, 2018. During that assignment, he stood between enemy fire and fellow U.S. troops and allies as they carried a wounded ally to safety.

Both Cashe and Celiz would later succumb to injuries sustained while in combat.

During a mission in Afghanistan on Aug. 28, 2013, Plumlee rescued and defended fellow Special Forces teammates as insurgents invaded a forward operating base’s perimeter in a calculated attack. For his actions there, he, too, was honored with the medal.

“Today we honor three outstanding soldiers whose actions embody the highest ideals of selfless service,” Biden said. “We also remember the high price our military members and their families are willing to pay on behalf of our nation.”

Biden praised Cashe for his selflessness and dedication to his fellow soldiers. The Florida native is the first African-American to receive the Medal of Honor since the end of the Vietnam era. His widow, Tamara, accepted the medal on her husband’s behalf. 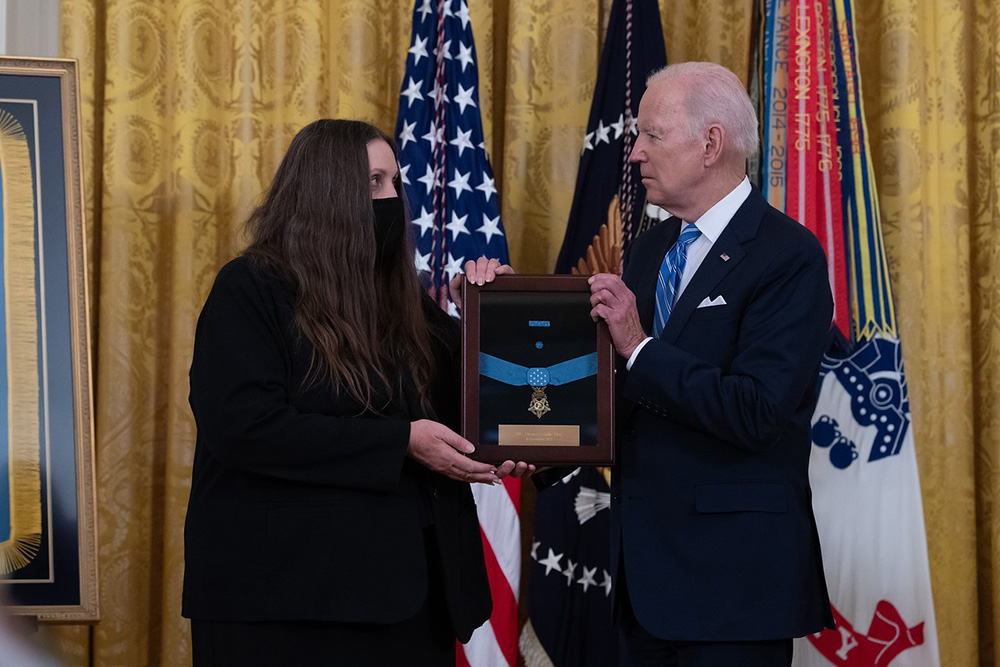 As a platoon sergeant in the 3rd Brigade, 3rd Infantry Division, Cashe was in command of a Bradley vehicle during a night patrol near Samarra, Iraq. During that expedition, an improvised explosive device struck his vehicle.

“The patrol [team] was still taking enemy fire, but Cashe thought only of his fellow soldiers trapped in the troop compartment,” Biden said. “He pushed his own pain aside and returned to the burning vehicle and pulled four soldiers free … His love for his 3rd Infantry Division ran deep. No soldier is going to be left behind on his watch.”

The Bradley erupted in flames, and Cashe, drenched in fuel, pushed through the fire to rescue his fellow soldiers and an Iraqi interpreter. Although Cashe had burns on 72% of his body, he refused medical attention until he carried all his troops to safety. Cashe would later succumb to his injuries at Brooke Army Medical Center in San Antonio. 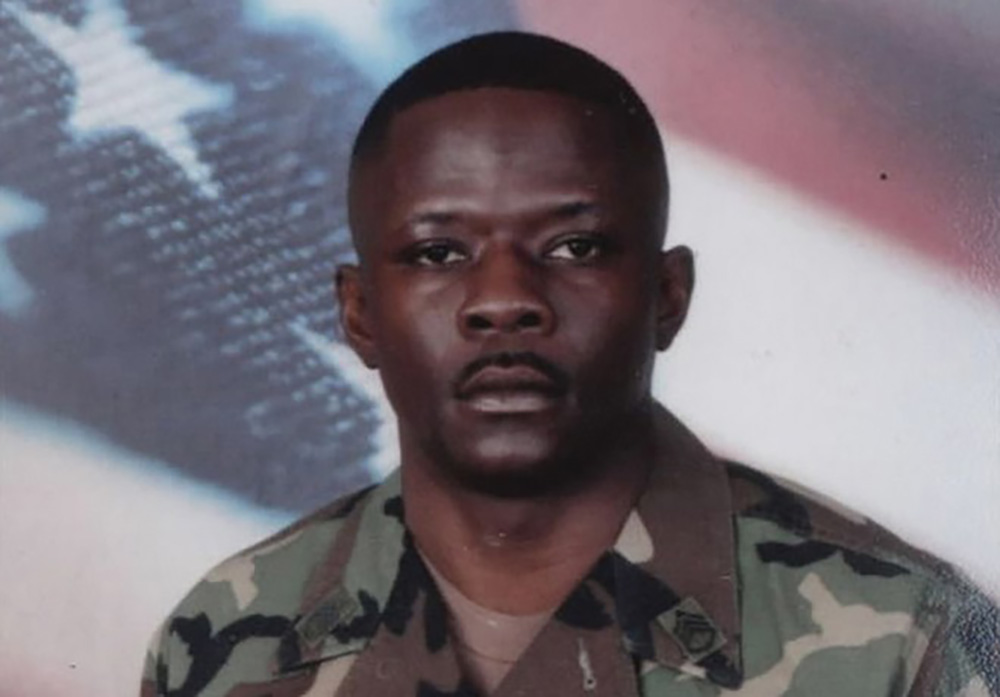 The late Army Sgt. 1st Class Alwyn Cashe poses for a photo in his uniform. Cashe was awarded the Medal of Honor for his actions in October 2005 while deployed in support of Operation Iraqi Freedom. © Courtesy Photo

“Alwyn Cashe was a soldier’s soldier — a warrior who literally walked through fire for his troops,” Biden said.

Near the end of his fifth deployment in July 2018, Celiz led a special operation to clear an area of enemy forces and prevent future attacks in the Paktia Province of Afghanistan. Suddenly, a large contingent of enemy forces attacked his unit. 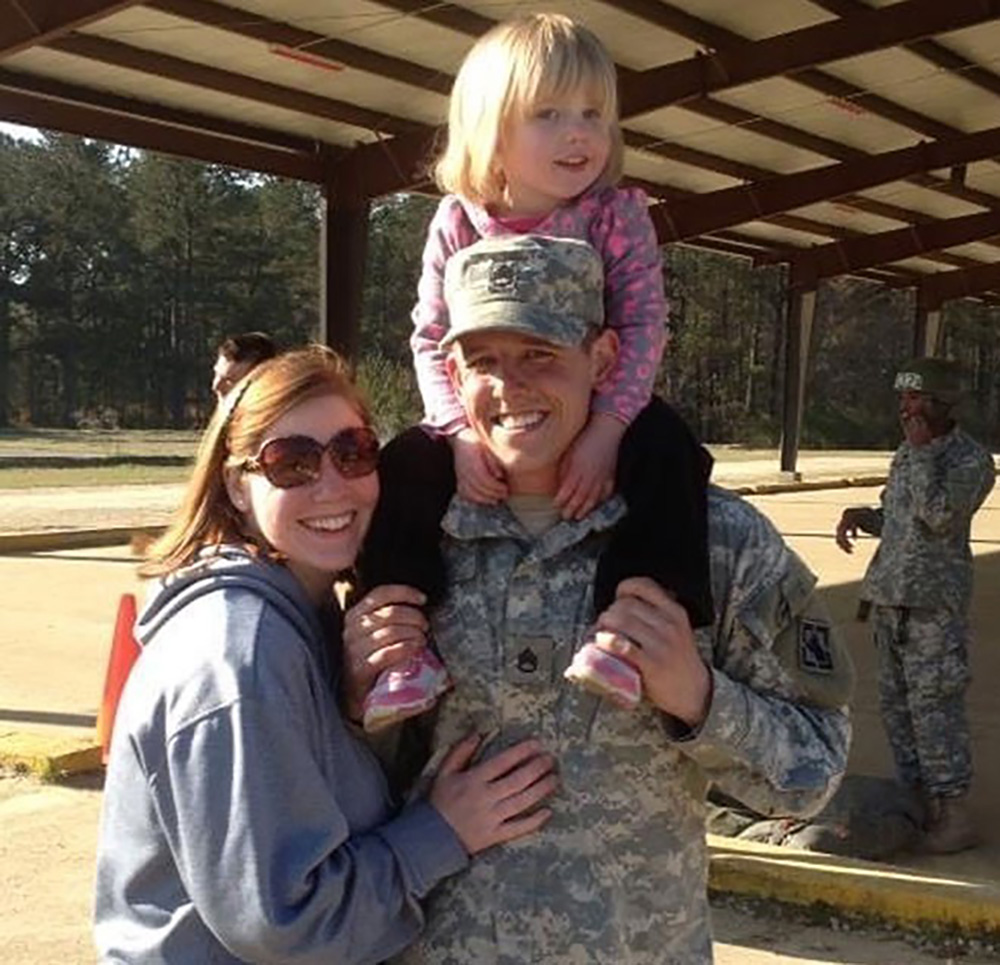 Army Sgt. 1st Class Christopher Celiz, shares a happy moment with his wife, Katie, and their daughter, Shannon. Celiz was awarded the Medal of Honor for actions during a mission in Afghanistan in July 2018. © Courtesy Photo

In response to the surprise attack, Celiz immediately went to a heavy weapons system to defend team members from machine gun and small arms fire. Realizing that the enemy fire prevented his team from mounting a counterattack, the soldier from Summerville, South Carolina, used his body as a shield while firing his rifle to defend fellow troops as they assisted a critically wounded ally.

“The sergeant knew his time was critical to get his wounded teammate loaded and treated,” Biden said. “So, he, once again, knowingly and willingly stepped into the enemy’s crosshairs.”

After a medical helicopter lifted off to carry the wounded to safety, enemy fire struck Celiz. Instead of seeking medical attention, Celiz waved the helicopter off, ignored his wound, and stood between the aircraft and enemy bullets. Celiz later died of his injuries. 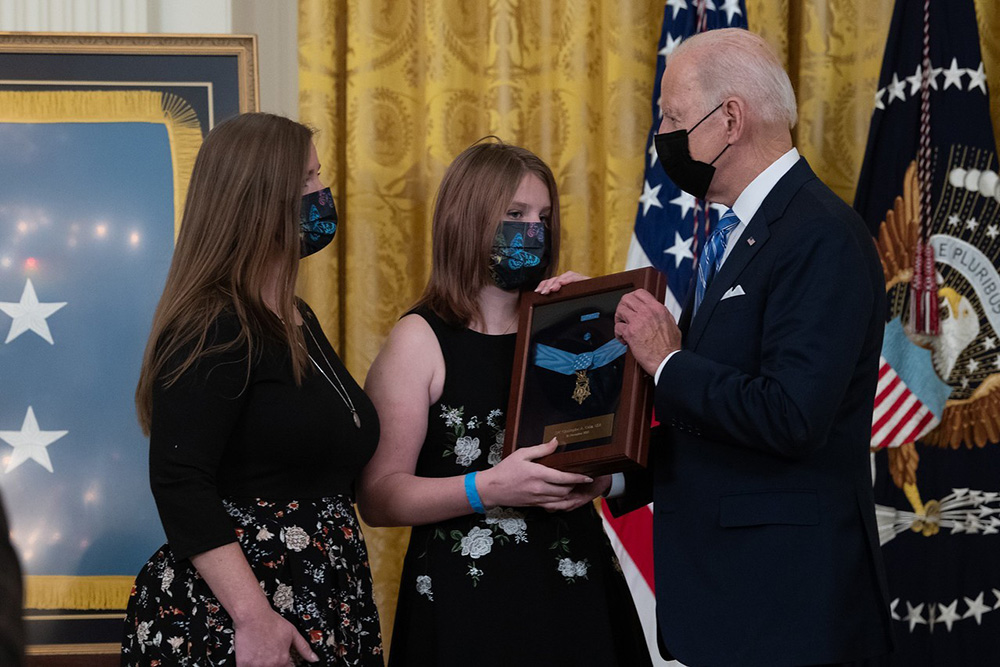 President Joe Biden presents the Medal of Honor to Katherine Celiz, left, widow of Army Sgt. 1st Class Christopher Celiz, and the couple’s daughter, Shannon, during a ceremony at the White House on Dec. 16, 2021. Celiz was posthumously awarded the Medal of Honor for actions of valor during Operation Freedom’s Sentinel while serving as a battalion mortar platoon sergeant with Company D, 1st Battalion, 75th Ranger Regiment, in Afghanistan, July 12, 2018. © Laura Buchta / U.S. Army

The president lauded Celiz for his courage against insurmountable odds. He presented the medal to Celiz’s wife and daughter.
“His legacy lives on in the lives he saved, the teammates he mentored, and the memories he made with his beloved wife, Katie, and especially with their precious daughter, Shannon,” Biden said. “Thank you for sharing your dad with our country, Shannon; we will never forget the debt that we owe you and your whole family.”

Then-Staff Sgt. Earl Plumlee was deployed to Afghanistan in support of Operation Enduring Freedom in April 2013.

While serving as a weapons sergeant assigned to Charlie Company, 4th Battalion, 1st Special Forces Group, at Forward Operating Base Ghazni, enemy insurgents tore a 60-foot crevice into the wall of the FOB.

Plumlee and five Special Forces soldiers raced toward the opening on two vehicles. After using his body to shield his driver from enemy fire, Plumlee repeatedly engaged multiple enemy targets, using only his pistol at times. At one point, the force of an enemy detonating a suicide vest pushed Plumlee into a wall.

“Bullets flew by — sometimes only inches away, and time and again, Staff Sgt. Plumlee closed with the enemy,” Biden said. “[On] multiple occasions during the fight, the insurgents detonated their vests right in front of him — at one point, hurling him into a wall and injuring his back.”

Ultimately, Plumlee led U.S. and Polish soldiers in a counterattack to defeat the insurgents. He also rescued and treated a wounded U.S. soldier.

“Now, Master Sgt. Plumlee, this recognition has been too long delayed for you and your family,” Biden said. “And no one will ever forget how you sprang into action when the enemy attacked our base. I’m grateful for your continued service and dedication to the country.”