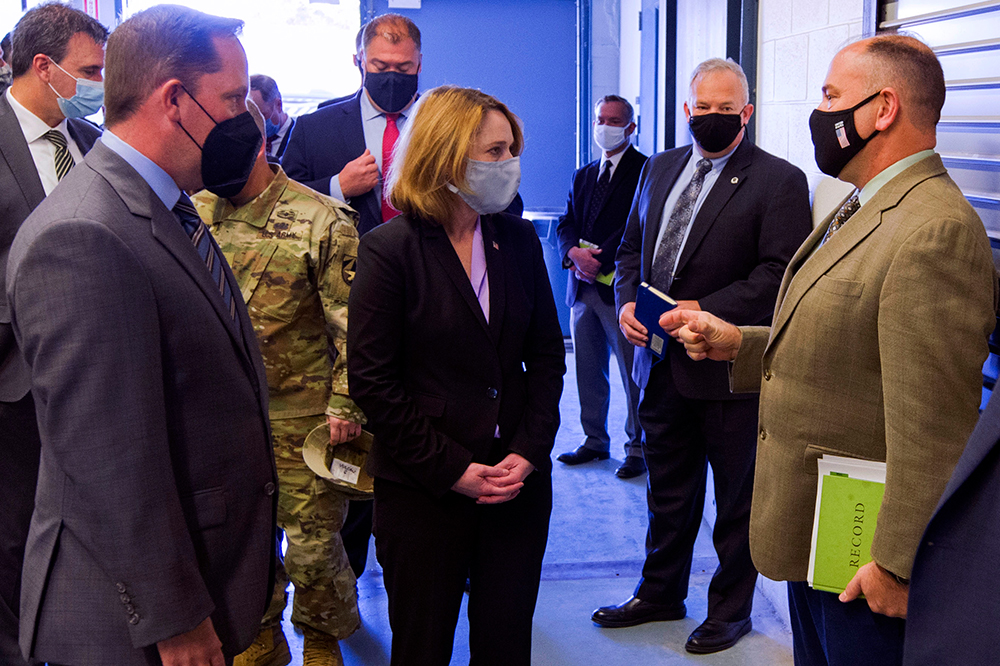 In the Western United States, wildfire seasons continue to worsen. The Arctic climate change is opening that region to new strategic challenges from nations such as Russia and China, she said. “And due to rising sea levels, and low elevation areas like the Marshall Islands — home to critical defense assets like the Ronald Reagan Ballistic Missile Defense test sites — are increasingly at risk of disappearing or becoming uninhabitable.”

Climate change continues to create extreme weather events, which increase the demands on the U.S. military while simultaneously affecting the military’s capacity to respond, the deputy secretary said. “Every dollar we spend recovering from the effects of climate change is one dollar the department is not investing to meet other priorities. In the face of these increasingly challenging conditions, the Department of Defense must remain ready to defend the nation.” 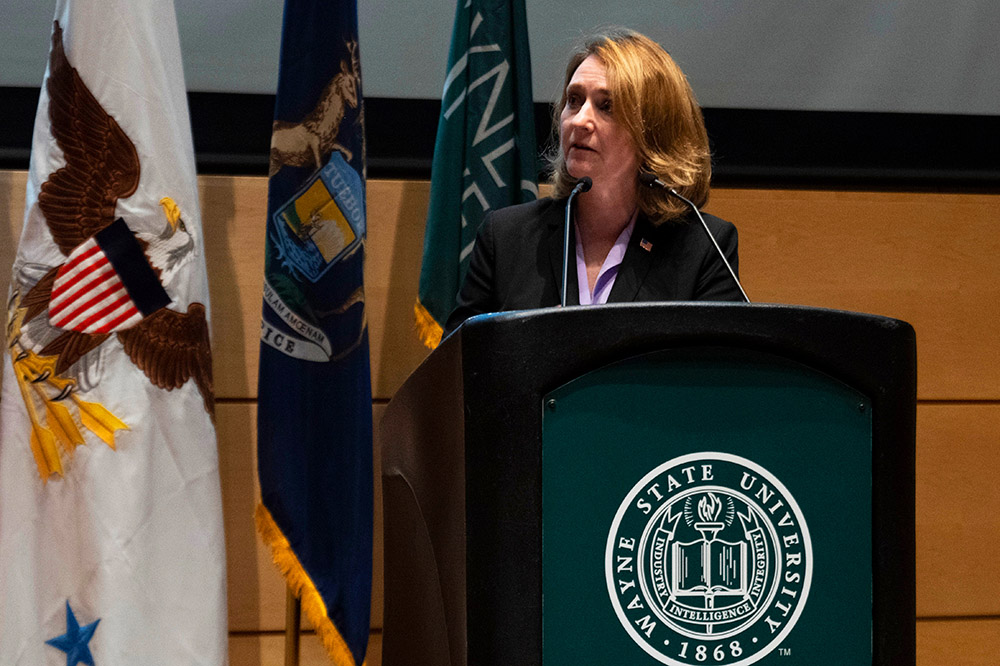 In line with Biden’s executive order, Tackling the Climate Crisis at Home and Abroad, the DOD recently released two plans, Hicks said. The first is the DOD Climate Adaptation Plan, which provides a roadmap to ensuring DOD maintains the ability to operate under changing climate conditions, and it sets a path to a lighter, leaner, more survivable and agile force that is trained and equipped to operate in all climatic conditions, she said. The second plan, the DOD Climate Risk Analysis, focuses on the geostrategic and mission implications of climate change. It is a framework for a shared department-wide understanding of climate change and its effects, Hicks said.

“These reports will help guide the department as we adapt to climate,” she said. “But the science is clear. As a nation, and a department, we must do our part to mitigate climate change itself.”

Hicks said the White House has set an aggressive goal for the DOD to reach net-zero greenhouse gas emissions by 2050, and the DOD is committed to meeting the challenge by making significant changes in its use of energy and increasing its investments in clean energy technology.

“In pushing toward net-zero emissions by 2050, the Department of Defense is developing a sustainability plan to meet our climate goals,” she said. “It will set a path for reducing greenhouse gas emissions, increasing our energy, water and waste efficiency, and enhancing sustainable procurement and supply chains. Additionally, part of the sustainability plan will be focused on developing a zero-emissions, non-tactical vehicle fleet. We also know that we need to optimize energy use in our tactical vehicles.”

At the DOD, climate change objectives align closely with the department’s mission, Hicks said, adding tactical vehicle electrification, initially, through hybrid electric technology, has the potential to reduce greenhouse gas emissions, but it could also provide significant operational capability to give troops an edge on the battlefield. “But we need partners to help capitalize on this potential,” she said. “And Detroit — the heart of America’s automotive industry — is going to be fundamental to achieving these goals. We can’t do it without you and without America’s private sector.” 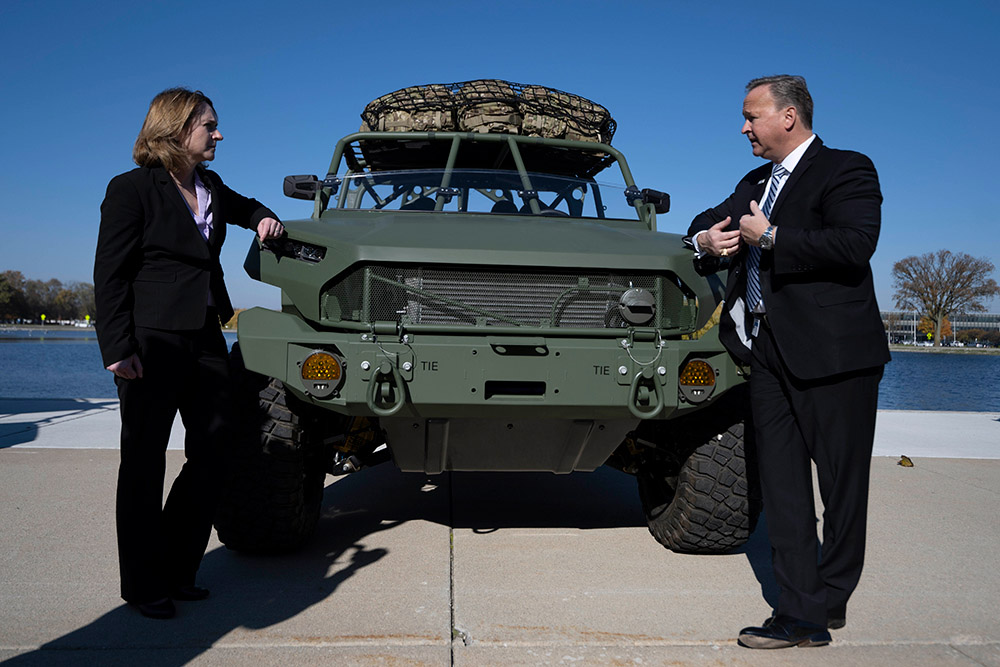 The DOD’s success in transitioning a massive fleet to zero emissions, most of which will be electric, will depend on America’s auto industry and auto workers in Detroit, and the same is true of its tactical vehicles, the deputy secretary said.

She emphasized that battery technology and lithium-ion batteries are the lifeblood of electrification and the future of the auto industry. “Batteries are also essential to thousands of military systems from handheld radios to unmanned submersibles, and to future capabilities like lasers, directed energy weapons and hybrid electric tactical vehicles.” A healthy battery supply chain is essential to the military, and when it comes to batteries, America must lead the world, which calls for innovation, she said.

It also means manufacturing to make sure the DOD has healthy supply chains, Hicks said. “It is estimated [that] investments committed to the global lithium-ion battery supply chain are approaching a trillion dollars. The problem, however, is that China presently dominates that supply chain.” She added that the DOD is committed to working with industry to increase resilience in the supply chain, which strengthens the industrial base. The DOD has joined the federal Consortium for Advanced Batteries, which is interested in ensuring a domestic supply of lithium batteries and is committed to accelerating the development of a robust and secure domestic industrial base, she added. “As part of that consortium, we released a national blueprint for lithium batteries, which informs how we will work to secure a sustainable lithium battery supply chain.”

The United States also needs to make sure electric grids in communities and on military installations are up to the challenge, she said. The DOD is seeking solutions from its industry partners to help manage the new demands on electric systems. “We have a lot of work to do before we’re able to reach net-zero emissions by 2050,” Hicks said.

“Communities like Detroit will be at the heart of the energy transition,” the deputy secretary said. “For more than 100 years, Detroit has been central to American automotive manufacturing and center stage for innovation in the United States.”