Austin gave context to U.S. decisions in Afghanistan and also detailed U.S. actions during the fall of Afghanistan.

The United States spent billions outfitting and training Afghan security forces over the 20-year conflict. “The fact that the Afghan army [that] we and our partners trained simply melted away — in many cases without firing a shot — took us all by surprise,” Austin said. “It would be dishonest to claim otherwise.”

The secretary said American leaders need to consider some uncomfortable truths in regards to the Afghan military. The United States underestimated the damage that corruption in the Afghan military’s senior ranks played in building the security forces. “We did not grasp the damaging effect of frequent and unexplained rotations by [former Afghan] President [Ashraf] Ghani of his commanders,” Austin said.

In addition, the Doha Agreement — negotiated between the United States and the Taliban — had a negative effect on Afghan government forces, he said. “We did not anticipate the snowball effect caused by the deals that Taliban commanders struck with local leaders in the wake of the Doha Agreement, that the Doha Agreement itself had a demoralizing effect on Afghan soldiers, and that we failed to fully grasp that there was only so much for which — and for whom — many of the Afghan forces would fight,” Austin said.

Over 20 years, tens of thousands of Afghan soldiers and police died in battle. Many fought bravely, he said. “But, in the end, we couldn’t provide them with the will to win. At least not all of them,” the secretary said.

Austin also addressed questions raised in interviews on some 24-hour news channels that questioned why the U.S. didn’t use Bagram Airfield in the evacuation, why planning for the NEO effort didn’t start earlier, and why the U.S. forces didn’t stay longer to ensure all U.S. citizens were evacuated. Austin said planning for a non-combatant evacuation began early. The fact that U.S. troops were able to get to Kabul so quickly as the Taliban approached the capital is proof that planning had been done.

“By late April, two weeks after the president’s decision, military planners had crafted a number of evacuation scenarios,” Austin said. “In mid-May, I ordered Central Command to make preparations for a potential non-combatant evacuation operation. Two weeks later, I began pre-positioning forces in the region, to include three infantry battalions.” 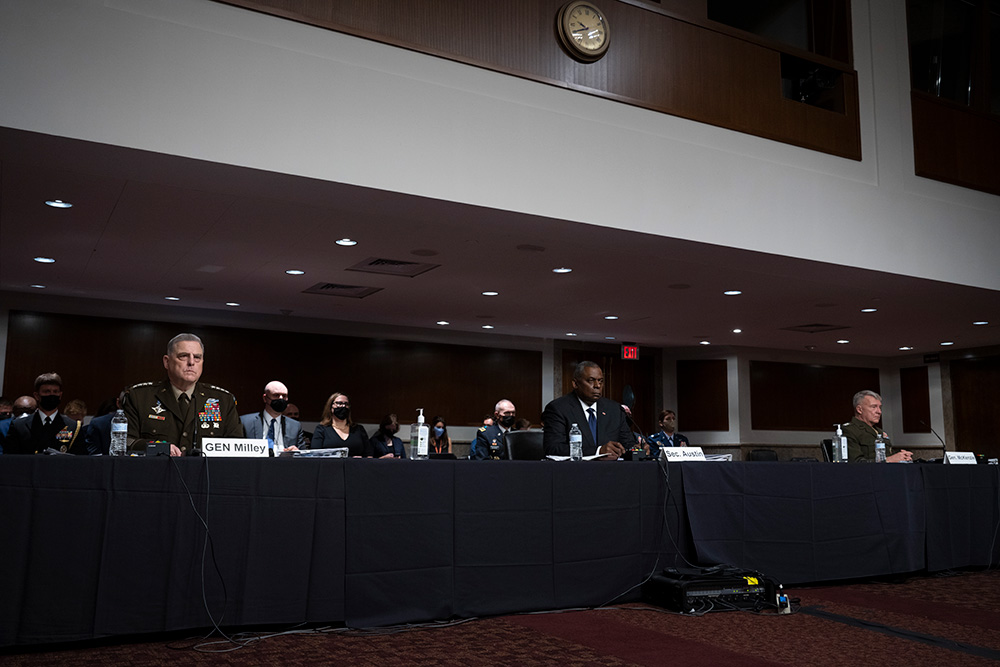 By the time the State Department called for the NEO, forces from the 24th Marine Expeditionary Unit and the 82nd Airborne were in the pipeline for deployment.

The first days at Hamid Karzai International Airport were chaotic with civilians storming onto the flightline trying to get aboard aircraft. But within 48 hours, our troops restored order, and the process began to take hold,” Austin said. “Our soldiers, airmen and Marines — in partnership with our allies, our partners and our State Department colleagues — secured the gates, took control of airport operations and set up a processing system for the tens of thousands of people they would be manifesting onto airplanes,” he said.

They exceeded all expectations. At the beginning, plans called for evacuating between 70,000-80,000 people. They evacuated more than 124,000 people. “On military aircraft alone, we flew more than 387 sorties, averaging nearly 23 per day,” Austin said. “At the height of this operation, an aircraft was taking off every 45 minutes. And not a single sortie was missed for maintenance, fuel or logistical problems. It was the largest airlift conducted in U.S. history, and it was executed in just 17 days.”

Austin said the circumstances in mid-August were particularly challenging with U.S. forces and the evacuees facing extreme heat, evacuating from a land-locked country without a functioning government, and an “active, credible and lethal terrorist threat.”

“In the span of just two days — from August 13th to 15th — we went from working alongside a democratically elected, long-time partner government to coordinating warily with a long-time enemy,” he said. “We operated in a deeply dangerous environment. It proved a lesson in pragmatism and professionalism.”

Retaining Bagram airfield as an evacuation point would not work. It would have required about 5,000 American service members to run and defend the base. In addition, it’s 30 miles from Kabul, — the main population center, so it wouldn’t have been an easy place for evacuees to reach.

Austin also spoke about over-the-horizon operations in Afghanistan. This refers to assets and target analysis that come from outside the country in which the operation occurs. “These are effective and fairly common operations,” he said, noting that just days ago the United States conducted an over-the-horizon strike against a senior al-Qaida figure in Syria.

“As for when we started evacuations, we offered input to the State Department’s decision, mindful of their concerns that moving too soon might actually cause the very collapse of the Afghan government that we all wanted to avoid and that moving too late would put our people and our operations at greater risk,” Austin said.

The same judgments apply for ending the NEO mission on August 31. “Extending beyond the end of August would have greatly imperiled our people and our mission,” he said. “The Taliban made clear that their cooperation would end on the first of September, and as you know, we faced grave and growing threats from ISIS-K. Staying longer than we did would have made it even more dangerous for our people and would not have significantly changed the number of evacuees who we could get out.”